A more solid outlook for the euro area’s economic activity

The recovery picks up speed and uncertainty eases. After the growth figures for the euro area were revised upwards by the European Central Bank (ECB) in March and by the International Monetary Fund in April, in May the European Commission also improved its outlook for the euro area, predicting growth in economic activity of 1.7% in 2017 and 1.8% in 2018. This series of upgrades reflects the decrease in downside risks for the euro area’s economy (especially domestic risks) and the consolidation of the improvement in the economic sentiment indicators, remaining at their highest level for several years since the end of 2016. In a similar fashion, CaixaBank Research has also improved its outlook for euro area economic activity to 1.9% in 2017 and 1.8% in 2018. The upgrade is widespread across countries and rests on the solidity of domestic demand, the gradual improvement in the labour market and accommodative financial conditions. However, as noted by the Commission, Europe’s economy is still facing an uncertain environment and significant global risks. Other factors are also hindering faster growth in the medium term, such as high debt and limited gains in productivity. One important goal that has yet to be achieved is therefore greater European integration. France’s President, the pro-European Emmanuel Macron who was elected after the second round of presidential elections with over 60% of the votes, could help to spur on this process.

Stronger growth in the euro area. Eurostat’s preliminary estimate suggests that euro area GDP grew by 0.5% quarter-on-quarter in Q1, the same rate as the previous quarter, and by 1.7% in annual terms. This positive performance was shared across different countries, with particularly good GDP quarterly growth figures in Portugal (1.0%) and Spain (0.8%), but also positive figures in Germany (0.6%) and France (0.4%). On the downside, Italy once again recorded weak growth (0.2% quarter-on-quarter). Beyond the euro area, the countries of emerging Europe also posted good Q1 figures, accelerating their growth rates. Romania grew by 5.6% year-on-year and Poland and Hungary recorded higher-than-expected growth rates, both up by 4.1% year-on-year.

Economic activity indicators point to solid growth continuing in Q2. For the euro area as a whole, the composite business sentiment index (PMI) stood at 56.8 points in May, the same as in April. Therefore, the sentiment indicator comfortably remains in the expansionary zone for economic activity, now at its highest level since April 2011. By country, the figures for France and Germany have been published, also at their highest since 2011: 57.6 points in France, the highest since May 2011, and 57.3 points in Germany, the highest since April 2011. Although somewhat more delayed in their publication, other indicators also point to more solid economic activity. In March, industrial production increased by 1.9% year-on-year in the euro area thanks to widespread growth in the region’s main countries (1.3% in Germany, 2.0% in France, 2.8% in Italy and 0.4% in Spain).

Household consumption supports economic growth. Euro area retail sales rose by 2.4% year-on-year in March, ending Q1 with a faster growth rate than in January and February. The consumer confidence index for the euro area as a whole has maintained the improvement observed since mid-2016, standing at –3.3 points in May, slightly above April’s figure and the highest since 2007. This good tone in private consumption has been helped by the accommodative financial conditions, boosted in the short term by the ECB’s expansionary monetary policy and in the medium term by the improved labour market (the unemployment rate stood at 9.3% in April, its lowest since March 2009).

Accommodative financial conditions are helping companies to access credit. As shown by the latest Survey on the Access to Finance of Enterprises, produced by the ECB, between October 2016 and March 2017 the demand for external finance by SMEs increased moderately in the euro area as a whole. In the report, SMEs signal that this increase in their external financing needs was accompanied by an improvement in the availability of bank loans and lower interest rates. Along these lines, they believe that access to external finance is not among the most pressing problems facing SMEs. This reflects two developments. The consolidation of the recovery, improving the economic prospects for companies and their solvency. And the transmission of the ECB’s expansionary monetary policy, resulting in accommodative financial conditions that support the euro area’s recovery.

Inflation continues to normalise. In May, the euro area’s headline inflation, measured by the harmonised index of consumer prices (HICP), stood at 1.4%, –0.5 pp compared to April’s figure. This is due to lower contributions both by the energy component, influenced by the gradual disappearance of the base effect of oil prices, and also by services. Core inflation, which excludes the volatile components (energy and unprocessed food), stood at 1.0%, –0.2 pp compared with April. This is because of the disappearance of the calendar effect of Easter which, as it fell entirely in April this year (in March last year), had temporarily pushed up the prices of services related to package holidays. Once these temporarily volatile movements have passed, core inflation should continue its gradual rise over the coming months, supported by the improved labour market. Headline inflation should also gradually converge towards core inflation as the base effect disappears of the slump in oil prices in 2014 and 2015 and their subsequent recovery throughout 2016.

A better economic outlook for Portugal. The Portuguese economy accelerated its GDP growth in Q1 to 1.0% quarter-on-quarter (compared with 0.7% in Q4), lifting year-on-year growth to 2.8%. By components, domestic demand made a significant contribution (+2.3 pp), boosted by higher private consumption (2.2% year-on-year) and investment (8.9%), while inventory changes deducted 0.5 pp from year-on-year growth. Foreign demand also made a positive contribution (+0.5 pp) with a big increase in exports (9.7% year-on-year) and imports (8.0%), reflecting the country’s solid domestic demand. Given these good Q1 figures and the fact that economic activity indicators point to higher growth in 2017, CaixaBank Research has revised its forecast for 2017 up to 2.5%, and for 2018 up to 1.8%. The Portuguese economy is therefore expected to post solid increases over the coming months based on a more balanced pattern of growth between domestic and foreign demand.

The European Commission recommends Portugal should exit its excessive deficit procedure. The Commission approves of the Stability Programme for 2017-2021 submitted by the Portuguese government at the end of April. This predicts a general government deficit of 1.5% of GDP and government debt-to-GDP of 127.9% in 2017, slightly lower figures than in 2016 (2.0% deficit and 130.4% debt). The Stability Programme also expects the general budget to gradually reduce its deficit up to the end of 2021, when it should achieve a surplus of 1.3% with government debt at 109.4% of GDP. In its recommendation, the Commission notes that Portugal’s government deficit ended 2016 below the 3%-of-GDP Treaty reference value. It also believes the Stability Programme presented ensures the Portuguese government will keep its fiscal account within the bounds established in European treaties. The European Council is therefore expected to follow the Commission’s recommendation and cancel the Excessive Deficit Procedure for Portugal. This will help the Portuguese economy to benefit from better financial conditions as it improves its reputation among investors.

Inflation is gradually getting back to normal. After inflation fell in 2014, 2015 and 2016 because of the slump in oil prices, headline inflation was boosted in Q1 2017 by rising energy prices, reaching 1.4%. In April this contribution by the energy component was joined by the calendar effect of Easter, with higher prices for goods and services related to transport, hotels and restaurants. Headline inflation consequently rose sharply to 2.4%. These temporary effects will disappear over the coming months and inflation will rise more gradually, supported by the improved labour market and increase in global prices for imports of intermediate goods. 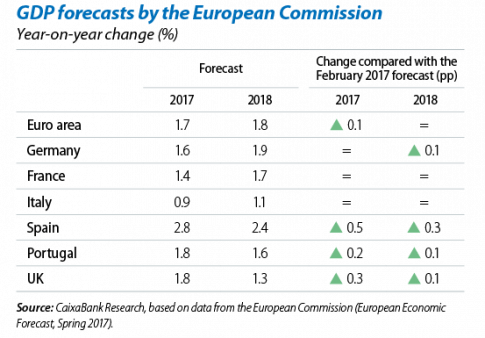 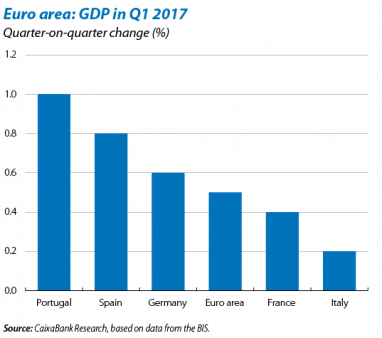 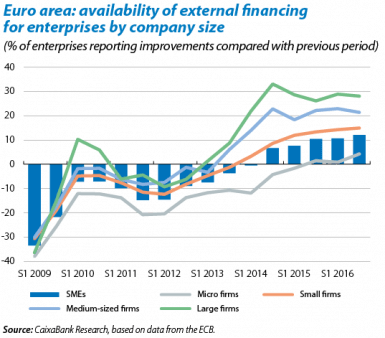 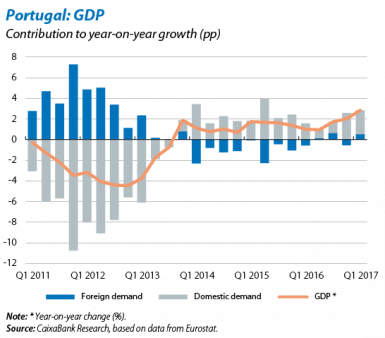 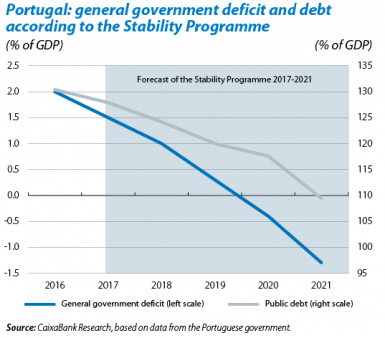