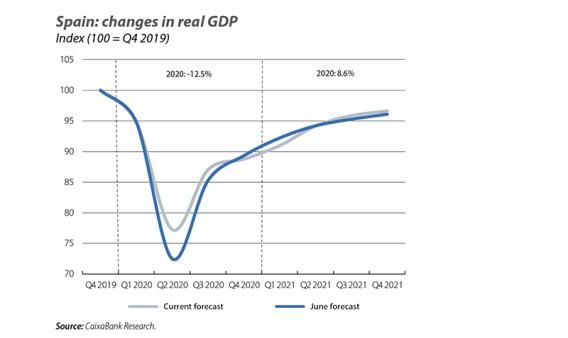 The economy experiences a revival, but the pandemic will continue to set the pace for activity

The indicators available to date show us that the Spanish economy has experienced a significant revival since the lockdown was lifted. Furthermore, the National Statistics Institute revised its GDP estimate for Q2 2020 up to –17.8% quarter-on-quarter. The economic impact of the lockdown was thus somewhat less than anticipated, which leads us to recalibrate our 2020 GDP growth forecast from –14.0% to –12.5%. Nevertheless, the increased level of mobility following the return from holidays and with the start of the new school year refocuses all the attention on how the pandemic will develop. Our macroeconomic forecasts are compatible with the emergence of new outbreaks, which are expected to be controlled with specific and localised measures, as the data currently suggest. In the last month, the number of infections confirmed by PCR test has stood at around 8,000 cases a day, a rate similar to at the peak between March and April. However, the current infection rate is not putting the same level of strain on the health system because most cases are asymptomatic or less severe. Moreover, as the mobility data show, the measures being taken to combat the new outbreaks are not impeding the return to activity that we are witnessing throughout the country. Nevertheless, uncertainty surrounding the economic forecasts remains very high, as they crucially depend on how the pandemic will develop. 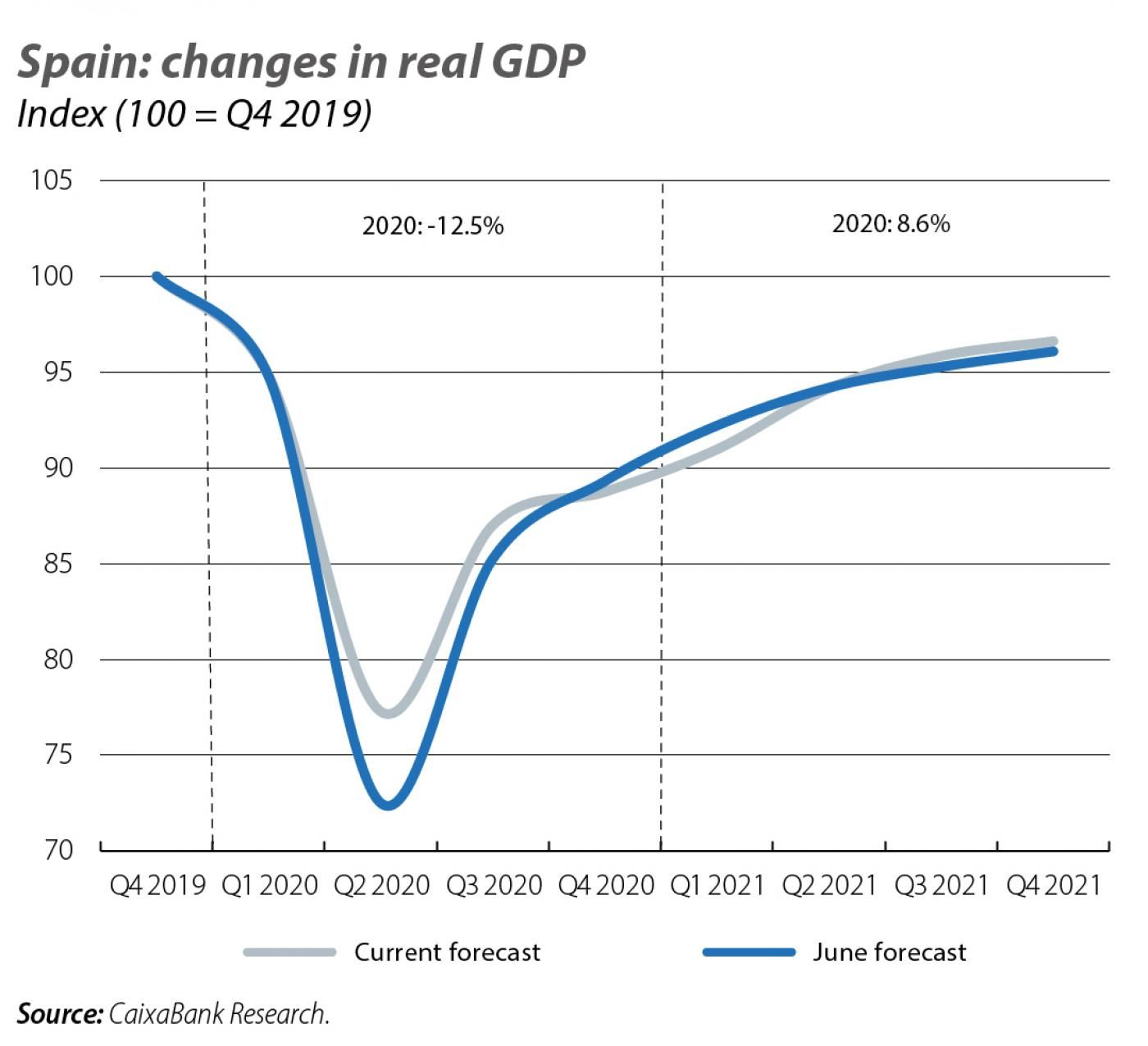 The improvement in economic activity has been highly asymmetrical between sectors

The latest indicators show that, while economic activity has gradually returned to normal, the recovery process is still far from over. The recovery is also proving to be disparate depending on the sector. In particular, while the PMI index for the manufacturing sector stood at 50.8 points in September, placing it in expansionary territory and well above the low of 30.8 points registered in April, the counterpart indicator for the services sector fell by 5.3 points to 42.4 points, due to the impact of the rise in coronavirus infections worldwide. In July, industrial production fell by 6.4% year-on-year, clearly less than the –14.3% decline of the previous month. In August, retail sales fell by 2.4% year-on-year, a slightly lower decline than in the previous month (–3.9%) but much lower than that registered at the height of the crisis (–31.6%). Finally, in September, total card spending registered on CaixaBank POS terminals and cash withdrawals showed a decrease of 12% year-on-year, a slightly lower drop than in the previous month (–9%). By component, in-person consumer spending by Spanish residents performed particularly well, standing 4% above the level of September 2019. This contrasts with the performance of spending by foreigners, which still registered a drop of around 70% year-on-year. This latter figure is a sign of the difficulties that the tourism sector is enduring, as it is bearing the full brunt of the pandemic’s impact on confidence and economic activity. Once we compile all the information from these indicators together, our Nowcasting GDP forecast model gives us a GDP growth forecast for Q3 2020 around 12% quarter-on-quarter. 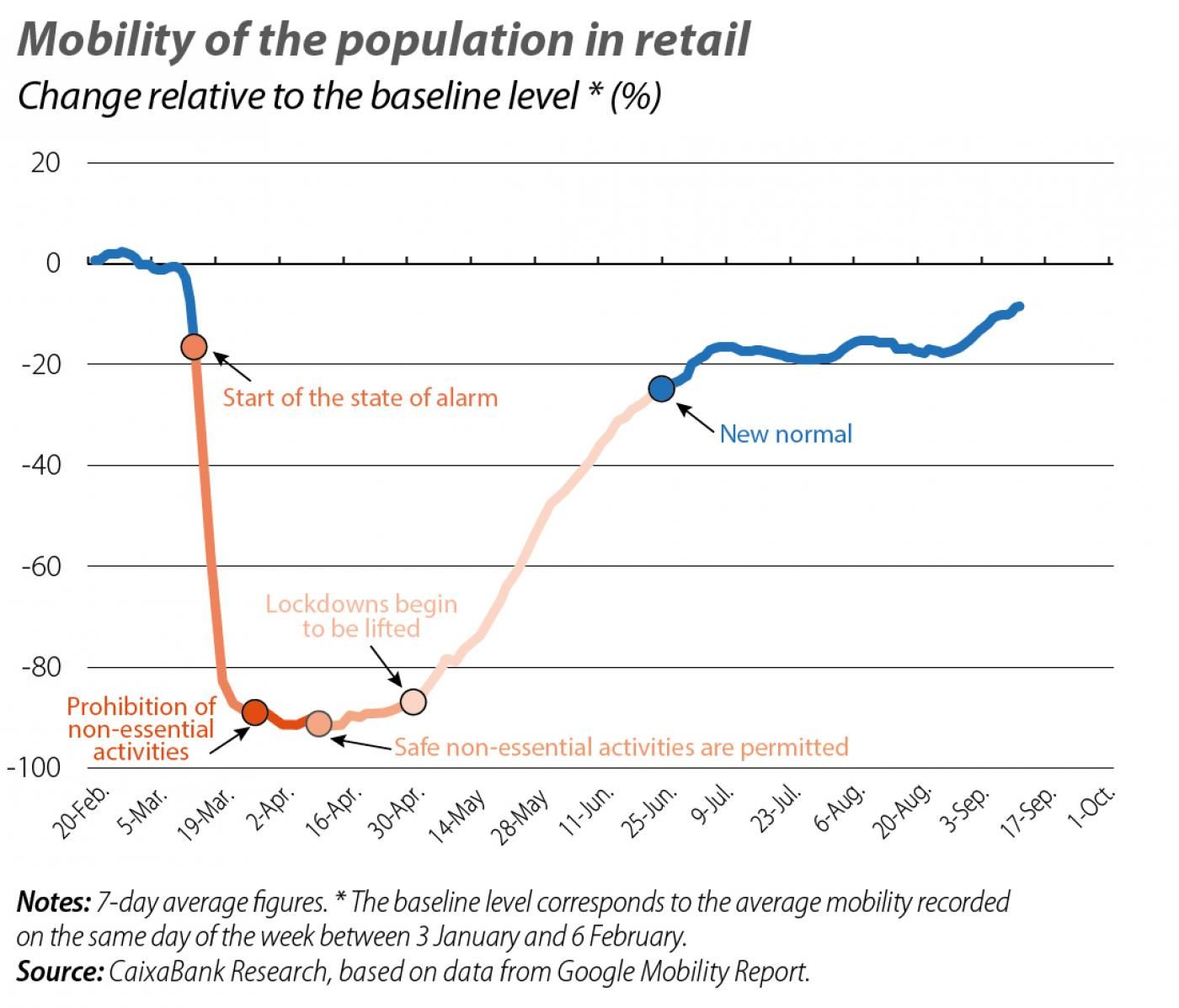 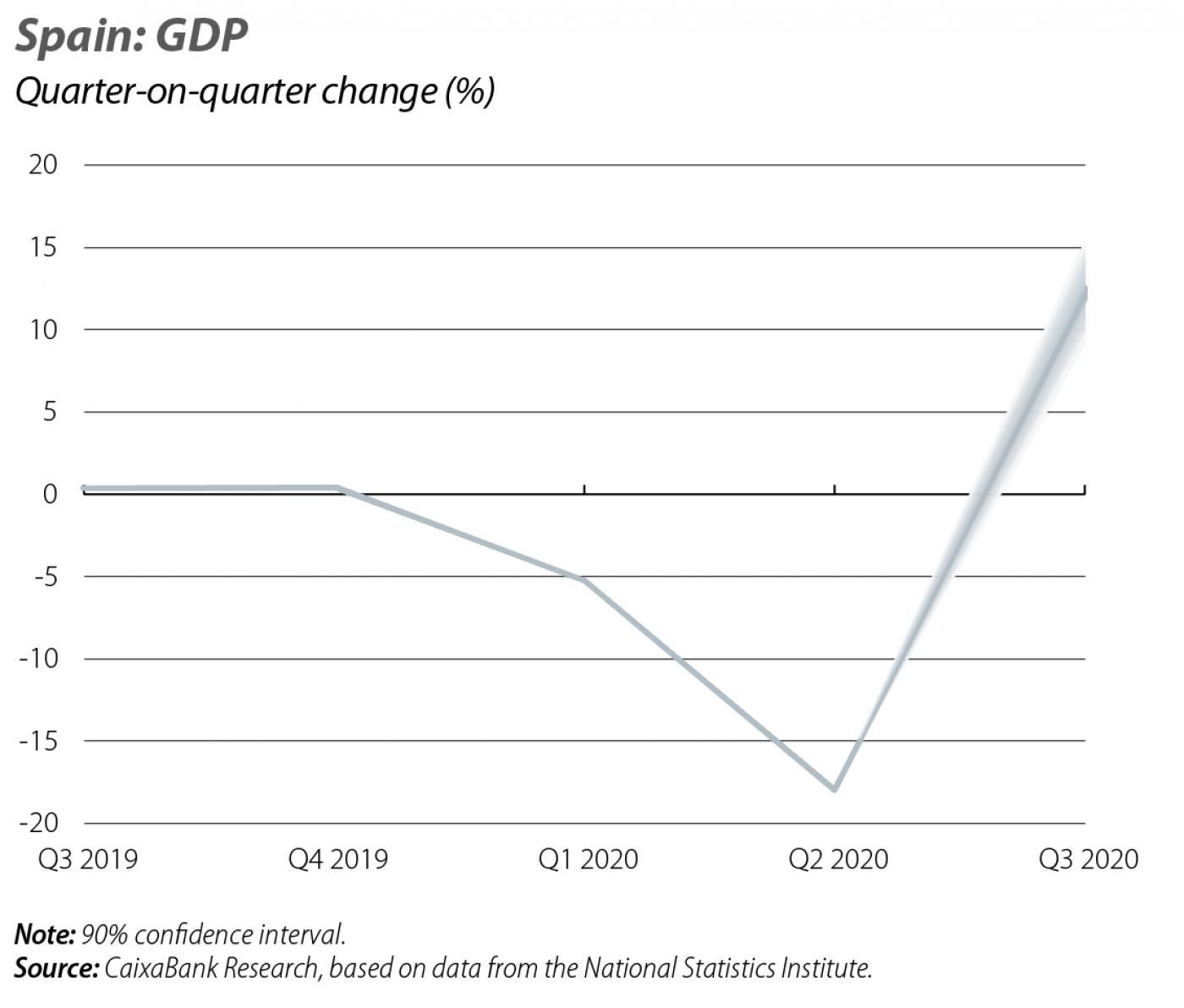 The recovery of the labour market continues

Social Security affiliation continued to show encouraging data in September, with an increase in the number of registered workers (+84,000 people, bringing the total figure to 18.87 million). This is the fifth month with a gradual improvement. In addition, the number of employees affected by ERTE (furlough) schemes continued to fall during September, albeit it at slower pace than in previous months. At the end of September, 729,000 Social Security affiliates remained under ERTE schemes (84,000 less than at the end of August). This figure implies that some 6,000 people returned to work each day, which is fewer than in previous months (+10,000 in August, +23,000 in July). Thus, almost 80% of the Social Security affiliates who were under ERTE schemes in April have now returned to work, although the majority of those who remain affected by such schemes are concentrated in certain sectors that have been harder hit by the crisis and are having more trouble resuming activity. In a significant development, the extension of these schemes until the end of January 2021 has now been approved. Among other measures, the agreement includes a new type of ERTE specifically intended for those sectors hardest hit by the crisis, notably tourism and retail. Overall, we estimate that the number of Social Security affiliates who were actually working in September, and were not affected by ERTE schemes (whether total or partial) or registered as being temporarily inactive (in the case of self-employed workers), was around 17.8 million (–7.4% year-on-year), an increase of 373,000 workers compared to the previous month. 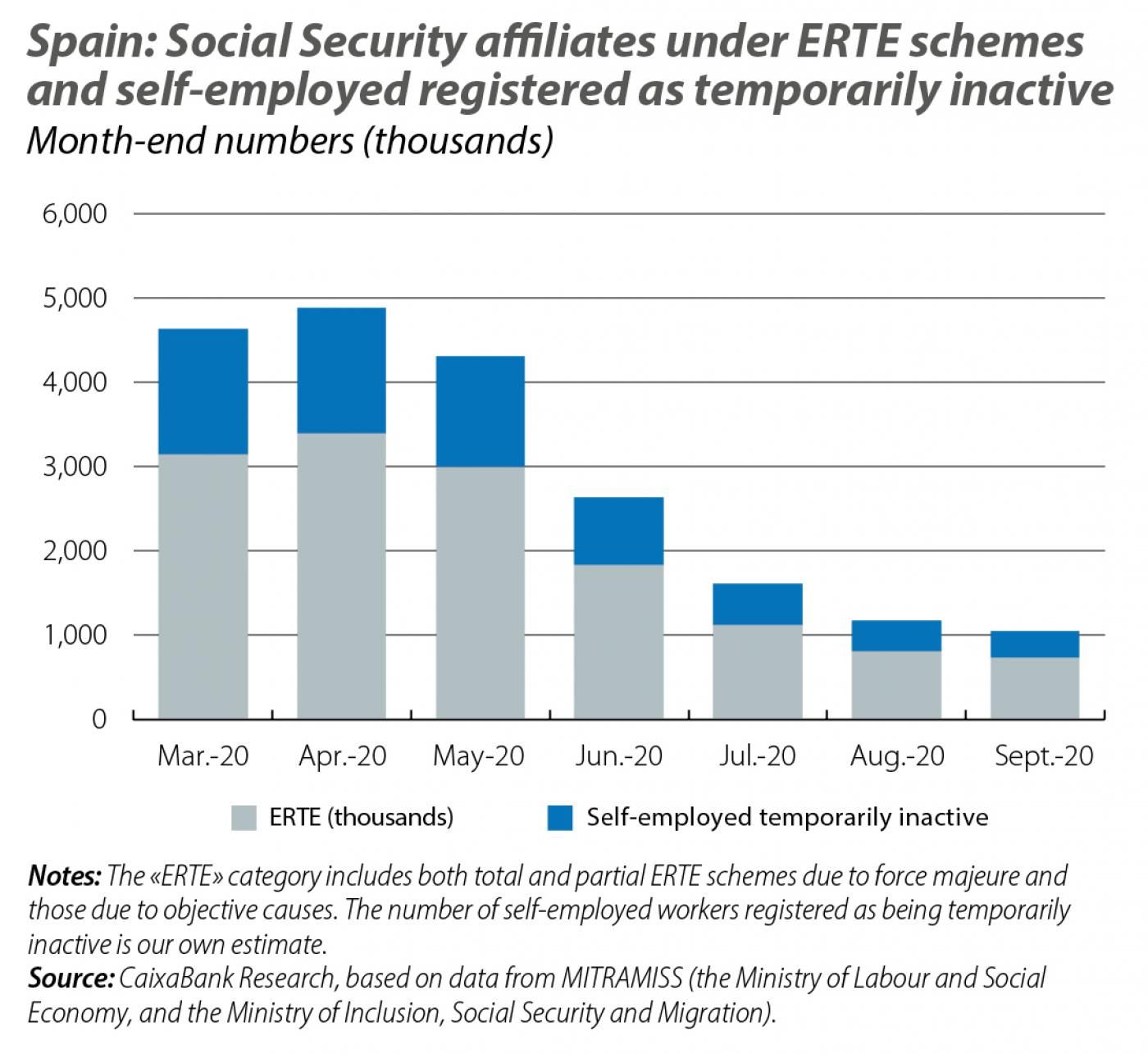 Indicators for the real estate market show a significant recovery in activity in the sector, following the standstill during the state of alarm. On the demand side, home sales recovered well in July and increased by 20% month-on-month, although in cumulative terms for the year to date there is still a year-on-year decline of 25.8%. On the supply side, the construction sector has also quickly restarted its activity. In August, cement consumption was only 2.1% below the level of August last year, with a notable recovery from the 50% fall registered in April. Despite the revival of activity, the main housing price indices have already begun to show the impact of the crisis on the market. According to the valuation data, the decline in housing prices accelerated in Q2 2020, with a 1.8% quarter-on-quarter fall (–0.8% in Q1 2020). In year-on-year terms, the price fell for the first time since Q1 2015 (–1.7% year-on-year). According to the data from property sales, meanwhile, prices remained virtually stagnant in quarter-on-quarter terms (+0.1%) and slightly up in year-on-year terms (+2.1%). Over the coming quarters, we expect the decline in housing prices to continue. Nevertheless, it is important to emphasise that the sector was in a much better situation prior to the COVID-19 crisis than it had been prior to the previous recession, which gives us some confidence in its ability to recover. 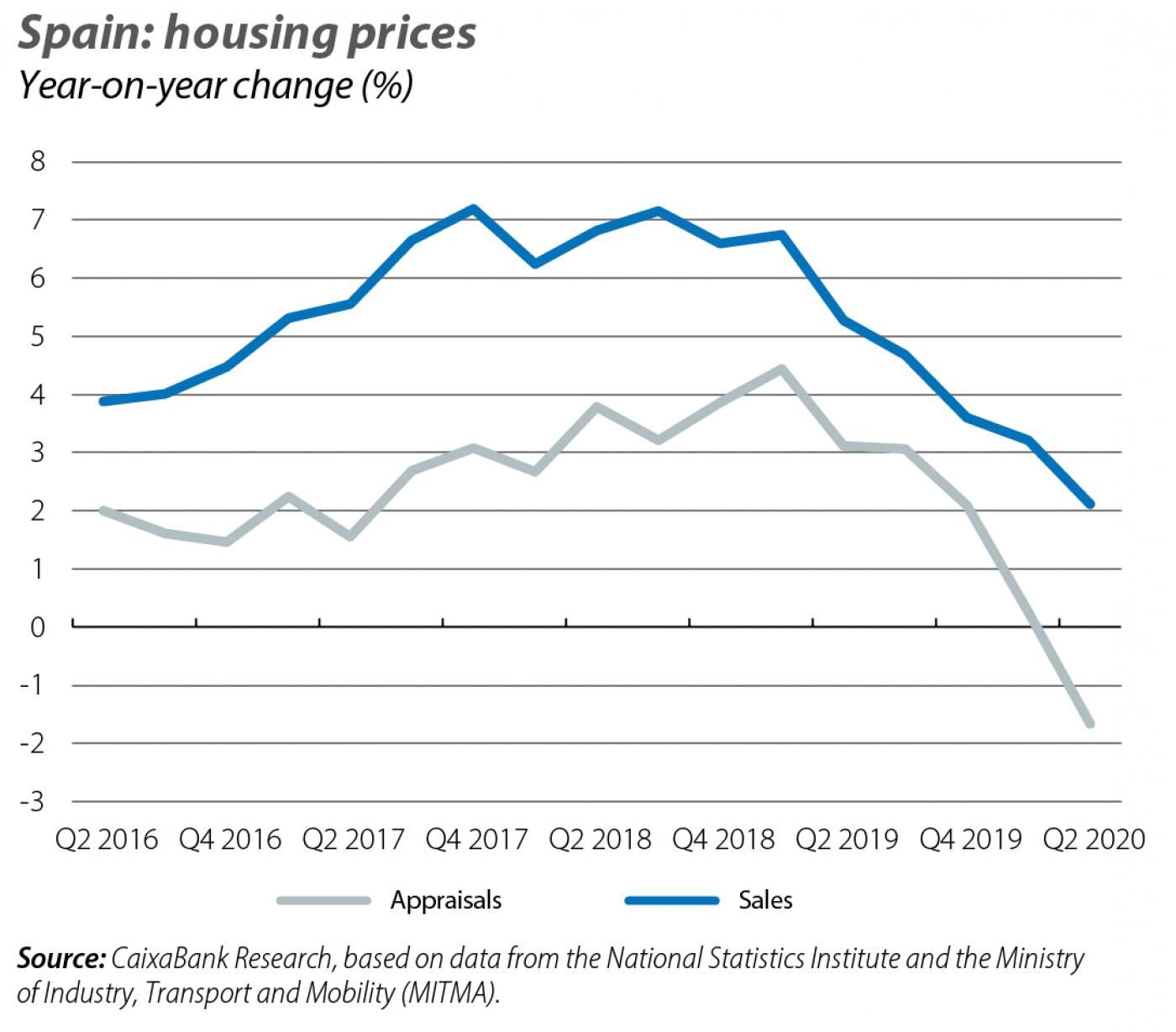 In Q2 2020, the household savings rate rose sharply (11.2% in cumulative terms for the last four quarters, compared to 7.9% in Q1 2020), reaching its highest level since 2010. This increase in savings reflects a much more pronounced decline in household consumption than in incomes (a –6.3% year-on-year change in consumption, versus –1.1% in incomes). Specifically, while consumption was stifled both as a result of people’s inability to realise certain types of expenditure during the lockdown and due to the uncertainty surrounding the economic outlook, household incomes benefited from the multitude of policies introduced since the spring to safeguard people’s purchasing power (e.g. ERTE schemes), which partially offset the negative impact of the rise in unemployment. 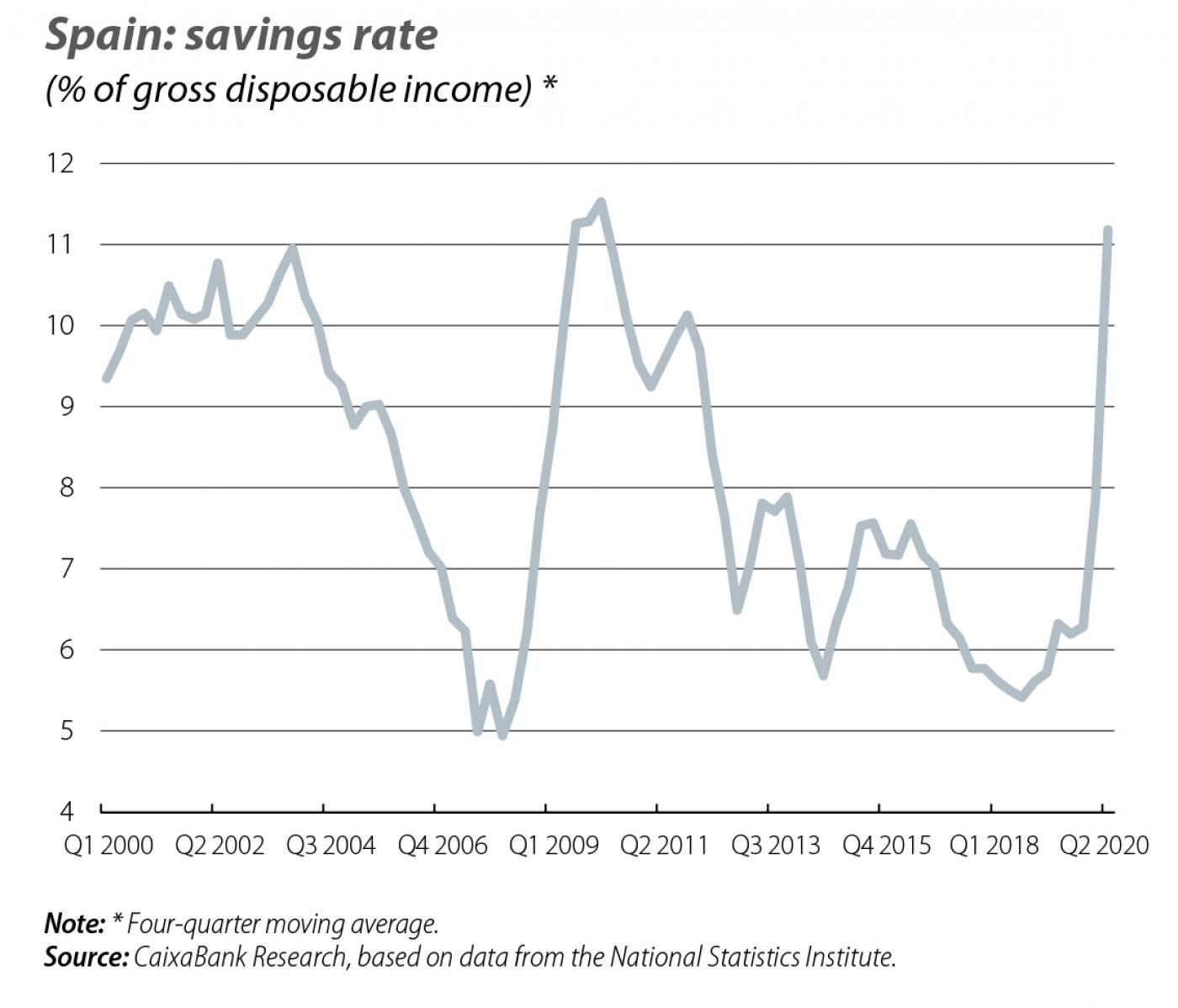 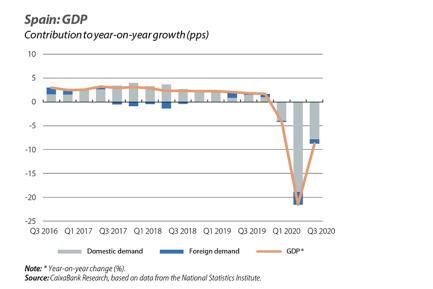 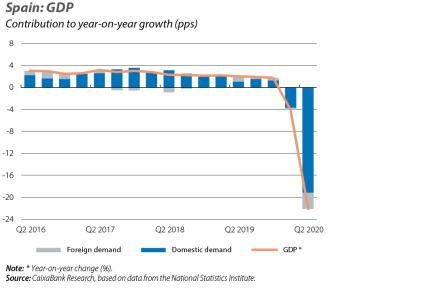