Optimism in the financial markets improves with caution Investor sentiment goes back and forth

During March, investors followed the erratic global developments in the pandemic, the Biden Administration’s fiscal stimulus and fears of overheating in the US economy as the main drivers of the market. Among these factors, it was the US fiscal stimulus which dominated, driving up the major stock market indices and, above all, long-term yields on US sovereign debt. However, there were sessions in which doubts surrounding the evolution of the pandemic (whether due to a slower than expected vaccination rate in some regions, the rise in cases at the global level or the extension of restrictions) dampened investor sentiment. However, one sphere in which there was no doubt was monetary policy, as both the US Federal Reserve and the ECB reiterated their intention not to withdraw the monetary stimulus in the short term. In fact, in the euro area, the ECB announced that it would accelerate the pace of asset purchases under the PEPP with the aim of maintaining accommodative financial conditions. As has been the case since January, the long-term yield on treasuries continued to rise due to the expectation of higher inflation rates in the coming years as well as the rise in real rates. The possibility that the fiscal package approved by the Biden administration could lead the US economy to overheat, combined with the Fed’s greater tolerance of inflation rates above 2%, is translating into increases in inflation expectations and rebounds in nominal rates (for more details, see the Focus «New fiscal package in the US: overheating in sight?» in this same Monthly Report). In the euro area, however, the story is somewhat different. The rise in the long-term yield on German debt since the beginning of the year has been smaller (+28 bps, compared to +83 in the case of US treasuries) and there are no fears of overheating in the European economy. Thus, during the month as a whole, the yield on German debt deviated from its American counterpart and registered a slight decline, while peripheral risk premiums fell. 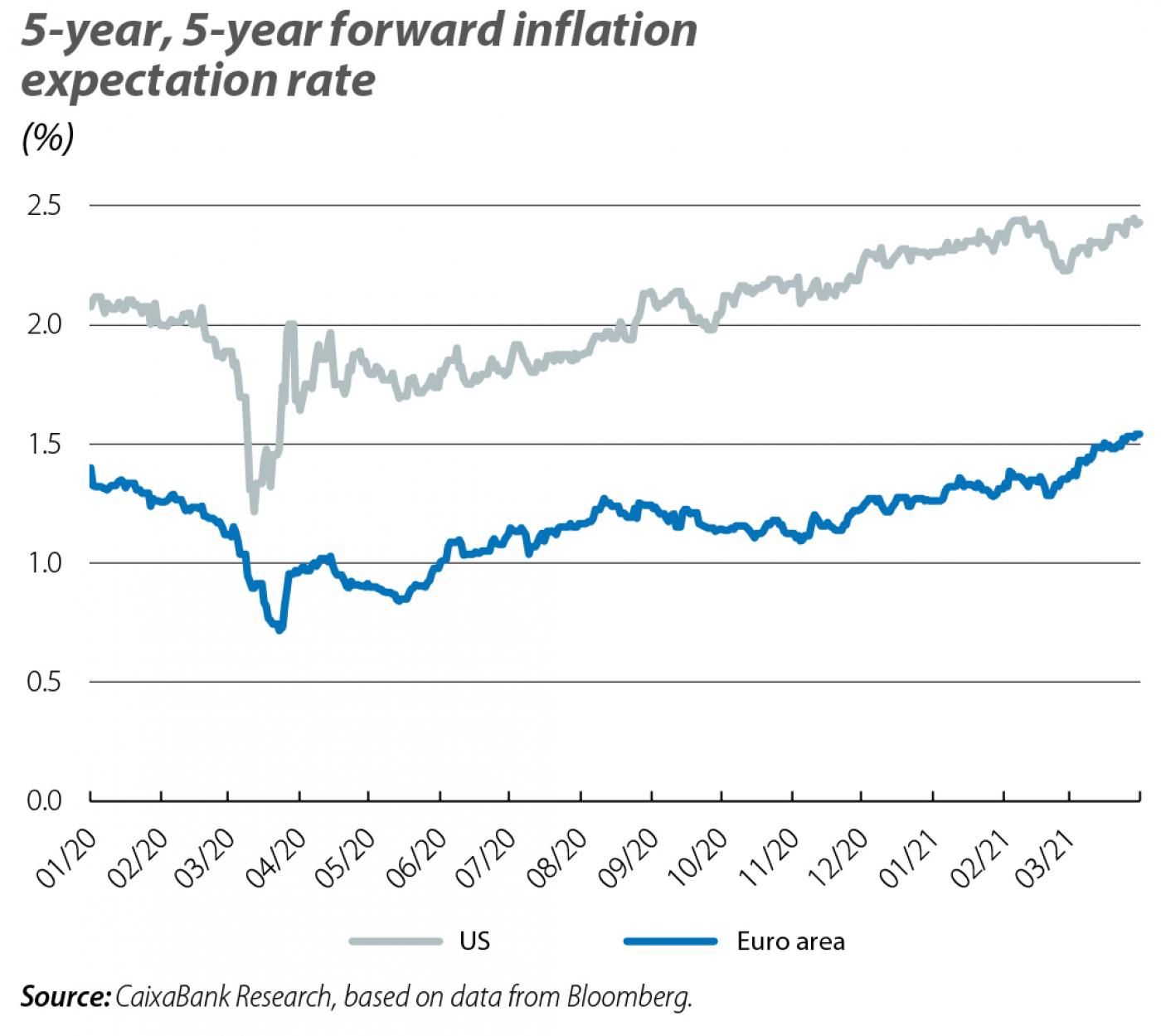 Despite the improvement in the economic outlook reflected in its new macroeconomic forecasts and the expectation of higher inflation in the coming years, at its March meeting the Fed reiterated that it does not expect to raise interest rates until at least 2023. Jerome Powell insisted that the Fed’s current priority is to achieve the goal of maximum employment, and recalled that there is still a lot of ground to recover in this regard. On the other hand, the Fed also stood still in the face of the recent rises in 10-year treasury yields, and Powell repeated his usual discourse: Fed members do not view the rise as cause for concern, since it reflects a better medium-term economic outlook. The Fed thus kept the official interest rate within the 0.00%-0.25% range, as well as leaving the rate of asset purchases unchanged: currently 80 billion dollars in treasuries and 40 billion dollars in MBSs per month. The ECB, however, responds to the rise in sovereign yields

In its quest to maintain an accommodative financial environment to support the economic recovery, Christine Lagarde explained after the Governing Council’s March meeting that the ECB would accelerate the rate of purchases under the emergency programme (PEPP). Data published during March already showed that weekly net purchases had been above 20 billion euros, compared to an average of 15 billion since January. Furthermore, the ECB did not change its view of the economic outlook for the euro area and published a forecast table very similar to December’s, with the difference of higher headline and core inflation during 2021 due to technical and temporary factors (see the Focus «The factors behind the rise in euro area inflation» in this same Monthly Report). The ECB thus kept interest rates at minimum levels (the depo rate at –0.50% and the refi rate at 0%), while it made no changes to its asset purchase programme (APP) or to the communication regarding its tools. The US dollar strengthens

In this scenario marked by higher long-term interest rates in the US, greater tolerance from the Fed of potential spikes in inflation, and higher economic growth, the dollar appreciated against most advanced and emerging-economy currencies, while the euro fluctuated below 1.18 dollars. Of particular note was the depreciation of the Turkish lira (–10% against the dollar), after President Recep Tayyip Erdoğan dismissed Naci Ağbal, who had been governor of the country’s central bank up until March. The dismissal came just days after the central bank had raised official interest rates by 2 pps, continuing the trend of the previous months (+10.75 pps since August 2020) which had restored some confidence in the Turkish lira. However, the contagion of this depreciation to other emerging currencies was limited. 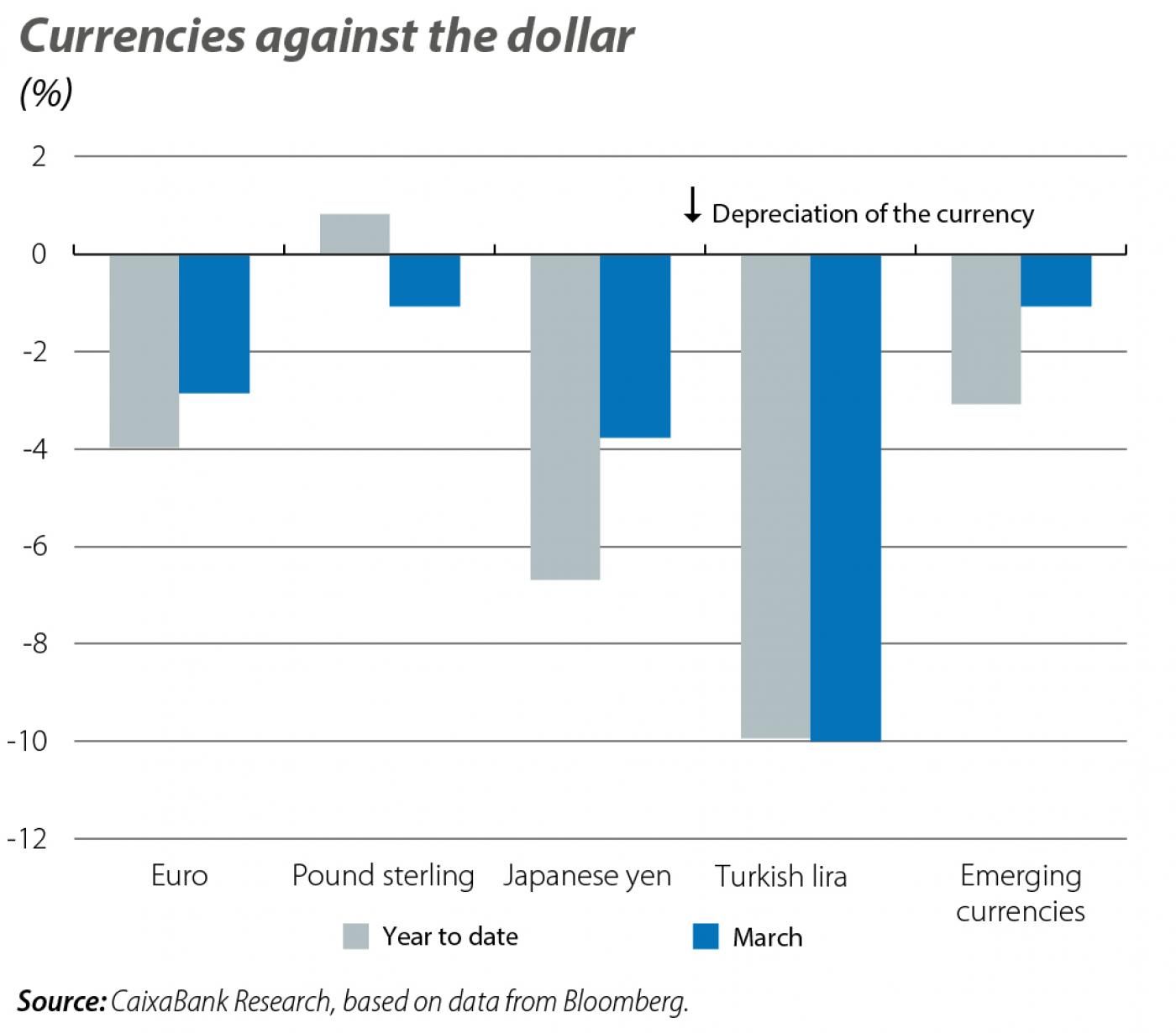 Optimism returns to the stock markets, spurred on by the US fiscal stimulus

The main stock market indices registered significant gains in March, continuing those of February and the recent sector rotation. In particular, in the last two months, stocks in sectors most closely linked to the business cycle have shown better performance, while sectors more sensitive to interest rate hikes (such as technology, which also benefited from changes in consumption patterns in 2020 brought about by the pandemic) showed a more contained tone. Thus, the Nasdaq index (with a greater weight of technology firms) ended the month on par, while the Dow Jones index and the S&P 500 climbed more than 4%. This rotation also drove up the euro area indices, which registered gains of between +4% in the Ibex 35 and +9% in the German DAX.