• The statistical reviews conducted by the National Statistics Institute and the Bank of Portugal have produced substantial changes in the data on Portugal’s growth and external position. In particular, the country grew by an average of 2.7% between 2016 and 2018 (2.3% in the previous series), and the surplus of the external accounts went from 0.4% to 1.4% of GDP in 2018. Investment was the variable that saw the biggest upward revision.

• However, the trends remain unchanged: growth continues to slow down and the external surplus is still deteriorating.

Recently, the National Statistics Institute conducted a review of the national accounts. This is a process coordinated at the European level that occurs every five years with the goal of incorporating new information and methodological improvements, namely reclassifications between private and public consumption expenditure and investment. For Portugal, this revision has resulted in an improvement in the growth figures since 2016, which show a greater convergence towards the euro area average. In addition, the external accounts were revised upwards, putting Portugal in a better place than previously expected.

Put briefly, the reviews have incorporated changes in the register of e-commerce purchases of goods and services (with a greater impact on private consumption and imports), as well as reclassifications of vehicle purchases (with a greater impact on private consumption and investment). The statistical review of the external accounts, meanwhile, has affected both exports (especially due to changes in the figures for tourism services) and imports (particularly in the category of goods). On the whole, as shown in the table, the biggest changes have occurred in the growth figures for 2017 and 2018, in which there have been significant revisions in investment, in private consumption and in imports and exports (in general, upward revisions).

The new figures show that, between 2016 and 2018, the economy grew by 8.2% in cumulative terms, 1.2 pps more than in the previous series. By component, we highlight the higher growth of investment, which reaches 21.0%, 4.2 pps above the rate estimated initially. This is thanks to a better performance from investment in transport equipment (43.7% in the new series versus 34.6% in the old one), construction (16.2% versus 10.6%)1 and intellectual property products (18.7% versus 11.1%). The second most affected component was imports, which amassed growth of 20.1% over the same three-year period, 1.5 pps more than in the previous series, as a result of a revision of the data relating to e-commerce. The new figures also show greater buoyancy in exports and private consumption: 0.9 pps more, in the case of exports, and 0.4 pps in the case of private consumption, both of which are affected by the incorporation of new information related to e-commerce.

The statistical review has also led to better figures for the economy’s financing capacity, which for 2018 went from 0.2% of GDP according to the old series to 1.2% per the new one. The most significant changes occurred in the figures for non-financial and financial corporations, as well as those for households. In the latter case, the new series have led to a considerable increase in disposable income (of around 3,500 million euros, equivalent to 1.7% of GDP) and in the savings rate, which rose from 4.6% to 6.5% of disposable income (see first chart).

The upward revision of disposable income reflects changes in the balance of payments, related with an update of data regarding the pensions of Portuguese people who have worked abroad and thus receive pensions from foreign countries, as well as pensions received by foreign retirees who hold resident status in Portugal.

In fact, the revision of the pension income received by former Portuguese emigrants and foreign retirees residing in Portugal explains the majority of the revision of the balance of payments, especially in the balance of secondary incomes. In 2018, this represented 2.0% of GDP in the new series, 0.8 pps more than in the previous one. Therefore, the current account balance was revised up to 0.4% of GDP, 1.0 pp more than previously, which helped to boost the current account and capital balance up to 1.4% of GDP (0.4% in the previous series). However, while this change represents an improvement in the levels recorded, it does not substantially alter the trends: the current account and capital balance still shows a decline, going from 2.1% of GDP in 2017 to 1.4% in 2018 (and down to 0.4% in the first half of 2019). On the other hand, the external balance was also affected by the incorporation of new information related to e-commerce (with a negative impact on the balance of goods and services, since it has led to higher imports), while the tourism balance benefited from the inclusion of information relating to local accommodation.

Finally, the statistical reviews have revealed a more negative net international investment position (standing at –105.6% of GDP in 2018, a deterioration of 4.8 pps in comparison to the previous figures). This is the result of an upward revision of foreign direct investment which, in net terms, now stands at 82,000 million euros for 2018, representing 40.2% of GDP.2

All in all, the revision of the national and external accounts shows that Portugal has a greater margin for manoeuvre to deal with the deceleration of the global economy. Nevertheless, the main trends exhibited by the old series remain present in the new ones: the deterioration of the current account and capital balance persists, as does the moderation of growth. We expect the external balance (i.e. that of the current account and capital balance) to remains positive but closer to 0%, while growth will slow down to levels slightly below 2%. 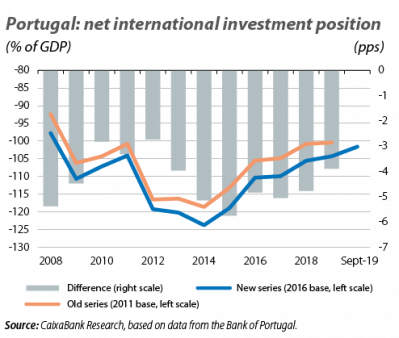 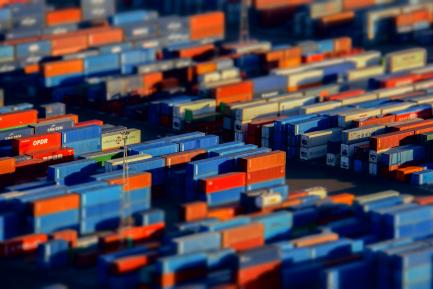 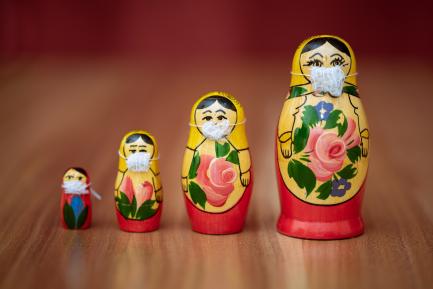