Surprisingly, GDP grew by 2.6% quarter-on-quarter and by 11.9% year-on-year thanks to the strength of private consumption and the recovery in tourism. This result suggests that our current forecast for GDP growth for the year as a whole (4.2%) may prove to be too conservative. However, given the risk of a deterioration due to the impact of the conflict in Ukraine and the cooling of demand from the country’s European partners, we prefer to adopt a more conservative stance and not alter our forecasts for 2022, for now. The first indicators relating to Q2, meanwhile, do not show any signs of cooling. For instance, the daily economic activity indicator rose by 10.3% in April and the sentiment indicators have improved slightly compared to March. On the supply side, the economic climate indicator recovered 1 decimal point in April compared to March, thanks to improvements in sentiment in industry, services and retail, which more than offset the worsening of sentiment in the construction sector. The lower optimism in this latter sector is driven by a decline in the order book. In industry, there was an improvement in confidence to –1.5 points from the –4 points of March, thanks to a more positive outlook for production over the next three months and a slightly less negative level in global demand. The lack of commodities continues to be a major obstacle for industrial production, but it is not any worse than it was in the closing months of 2021 or in the first months of 2022. 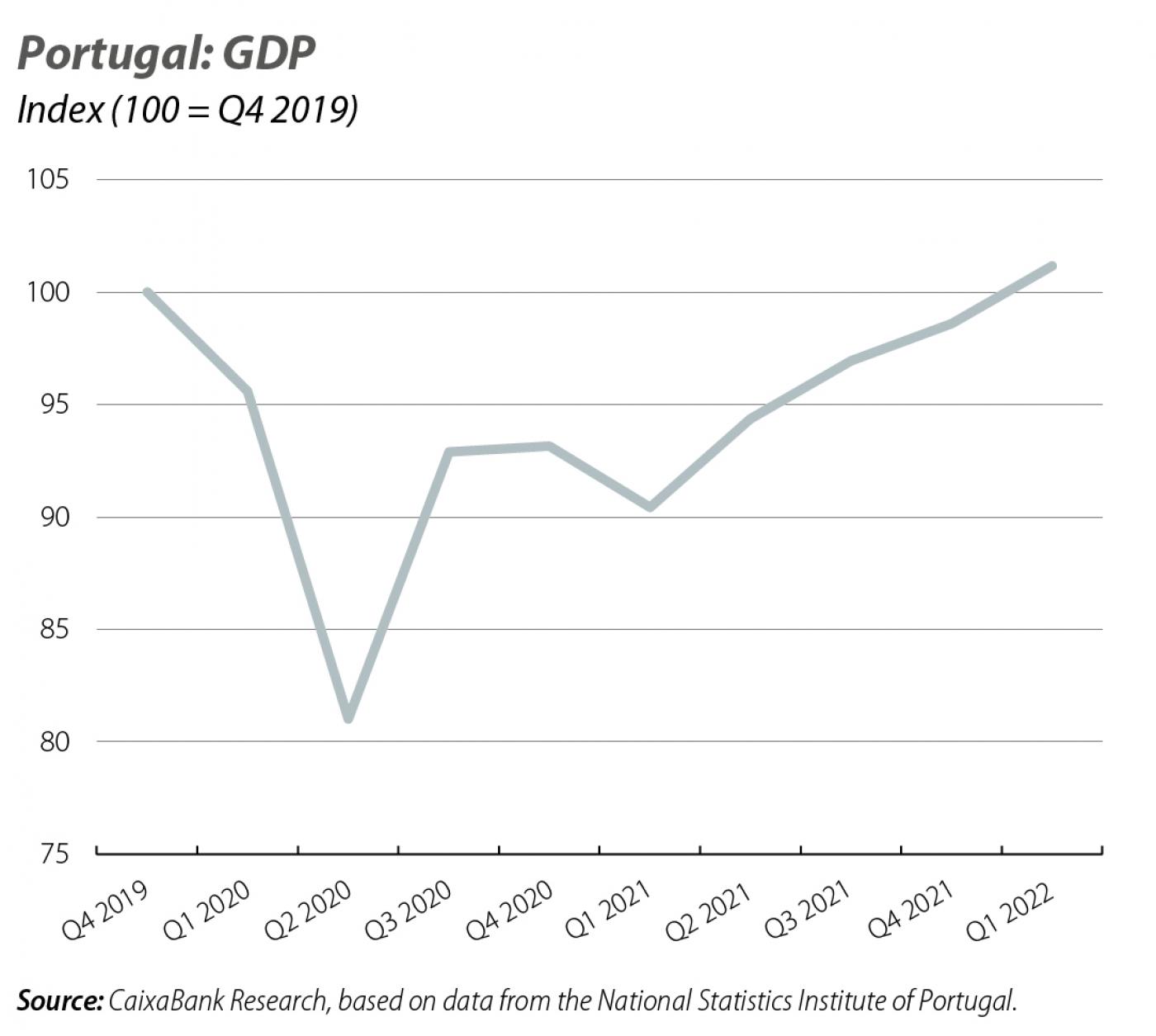 No let up in the consumer price rally in April

The 7.2% year-on-year change in the CPI is the highest increase since March 1993. The energy component remains the main driver of this price increase, as has been the case since mid-2021, with its year-on-year increase now as high as 26.7% (19.8% in March). The other most volatile component of the CPI basket, that of unprocessed foods, also shows a high growth rate, at 9.5% (5.8% in March). All the data suggest that the inflationary pressures will remain high in the coming months: the conflict in Ukraine is applying pressure on energy and various commodity prices, the lockdowns in China are impeding the normalisation of logistics chains and the prices of industrial products registered a significant year-on-year rally in March (26.3%). 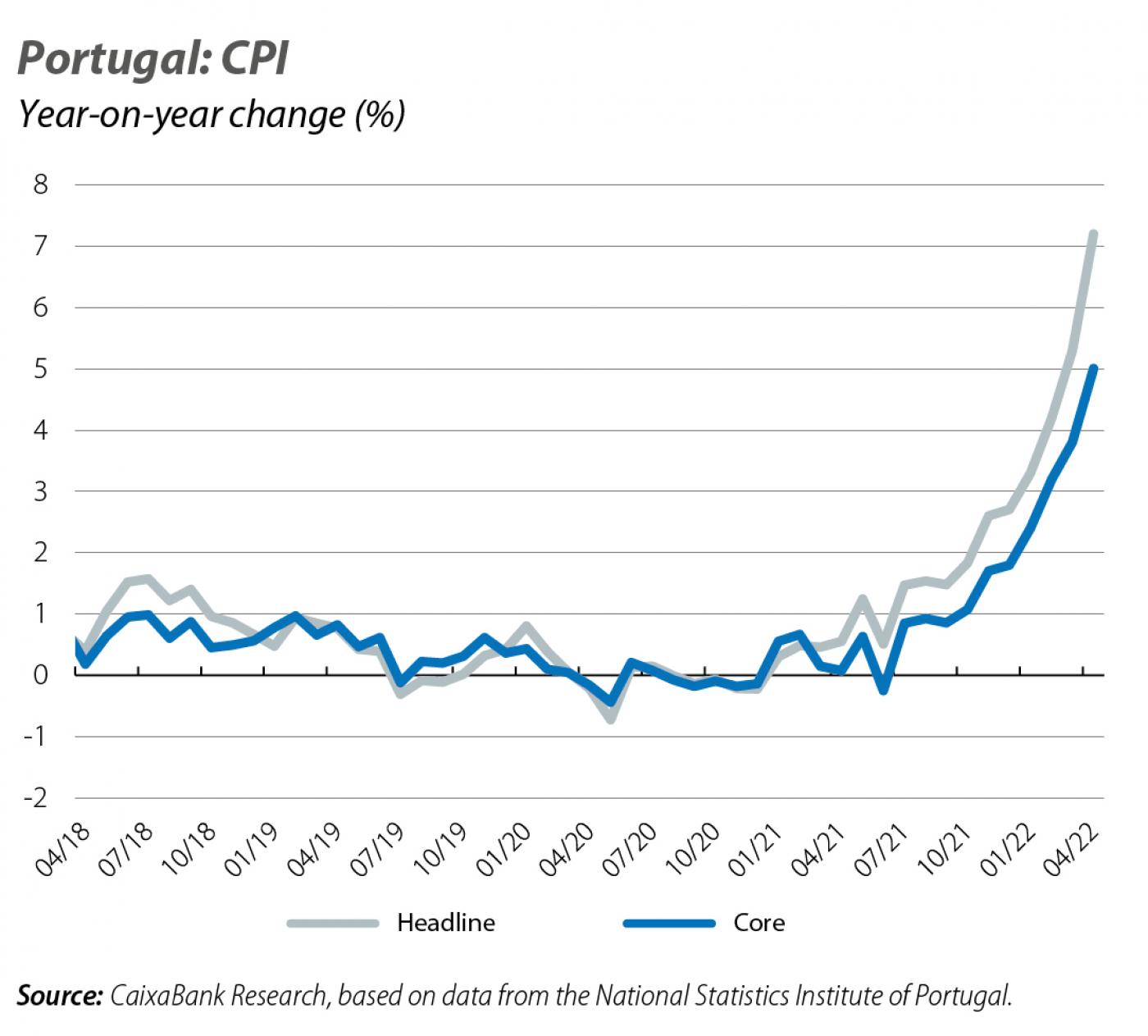 The labour market, so far, remains unaffected by the geopolitical tensions

Unemployment registered in job centres fell in March to below pre-pandemic levels, with a total of 326,251 people out of work. This represents 7,500 fewer people than in March 2019 and a reduction of 5.2% compared to February of this year (–18,000 people unemployed). This fall is largely explained by four sectors: accommodation and catering, real estate, administrative and support services, retail and construction. Unemployment in the construction and retail industries are already below pre-pandemic levels, consistent with the current labour shortages in these sectors. The latest data, meanwhile, indicate that the unemployment rate in February remained at 5.8% for the third consecutive month, with employment growth at 4.2% year-on-year and 2.7% compared to the pre-COVID period. There may be a slowdown in employment growth during the course of 2022, as a result of companies’ reduced hiring plans in the face of rising energy and commodity costs. 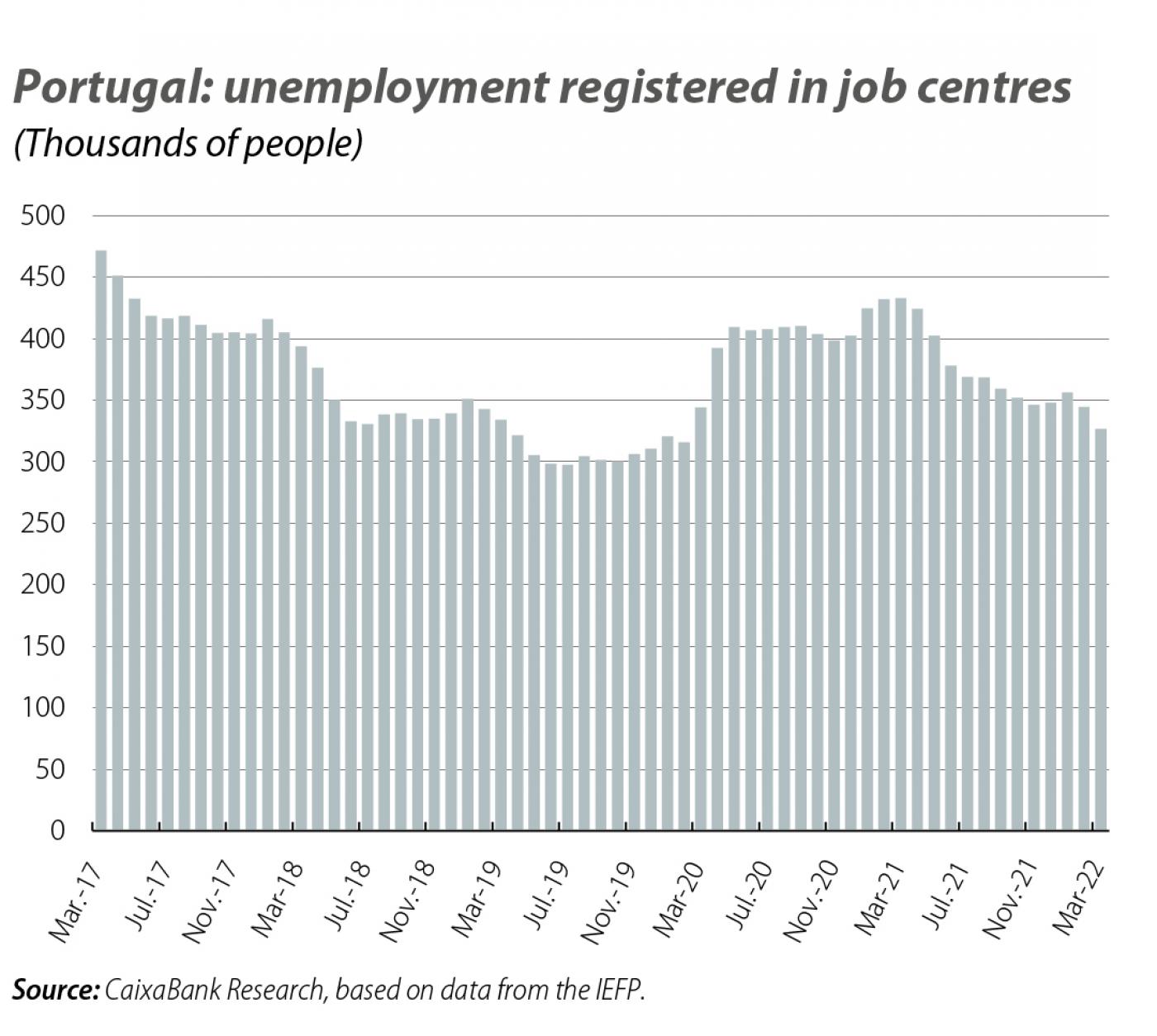 The central government funding needs are reduced in 2022 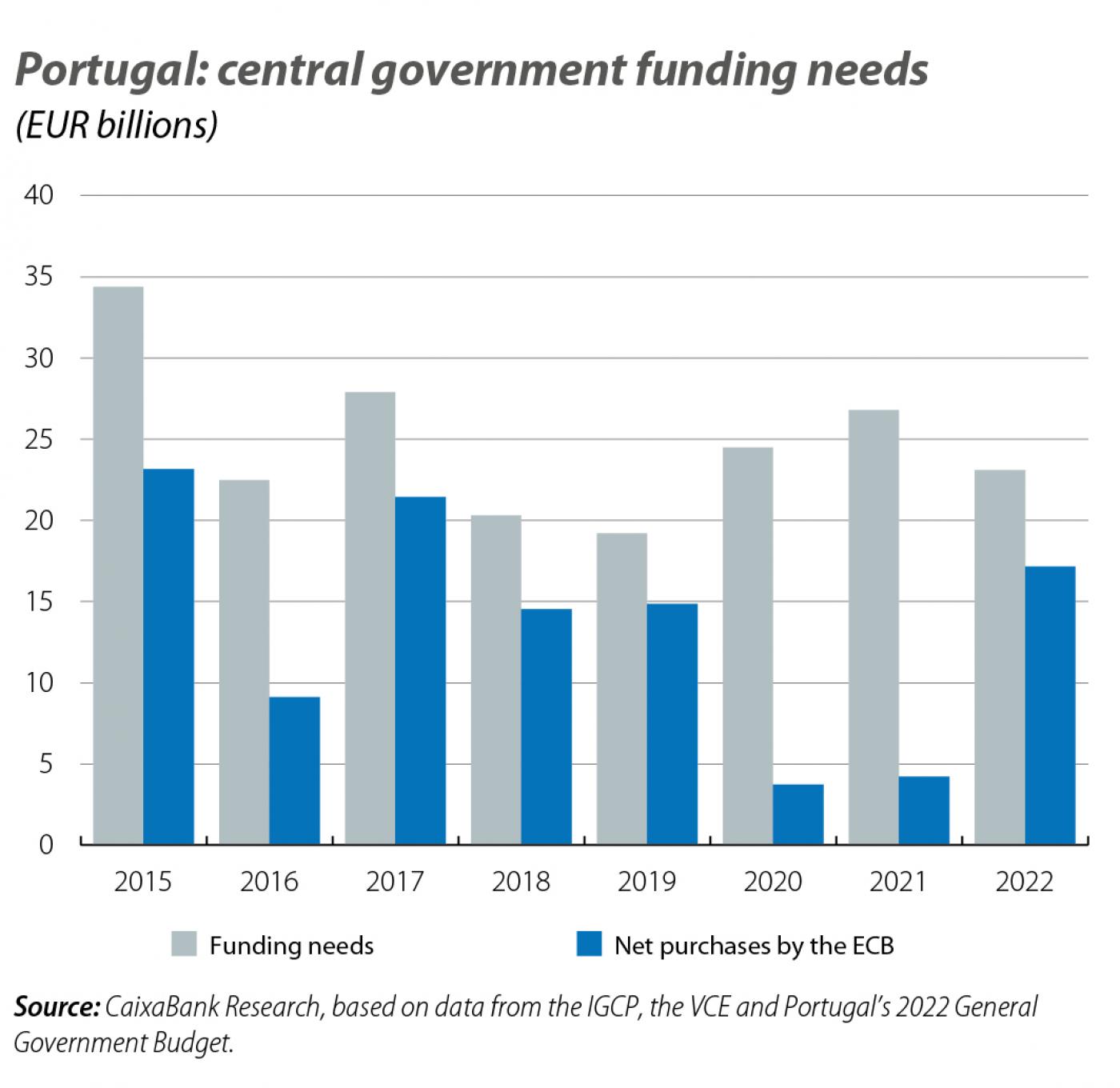 The war aggravates the imbalance in the current account

In the first two months of the year, the external deficit deteriorated by around 810 million euros compared to the same period in 2020, bringing it to 1,023 million euros. The deterioration of the deficit in the balance of goods is the main factor behind this trend, owing to the rise in import prices, especially in the case of energy goods. Although it is insufficient to offset the worsening of the deficit in the balance of goods, the recovery in tourism was reflected in an improvement in the surplus of the tourism balance, bringing it close to that recorded in the same period of 2019. Specifically, in January and February the tourism balance stood at 1,118 million euros, just 100 million less than in the first two months of 2019. For the year as a whole, we anticipate that the current account deficit will increase to 2.2% of GDP (see the Focus «In Portugal, the war in Ukraine (also) means a setback in the current account deficit» on our website). 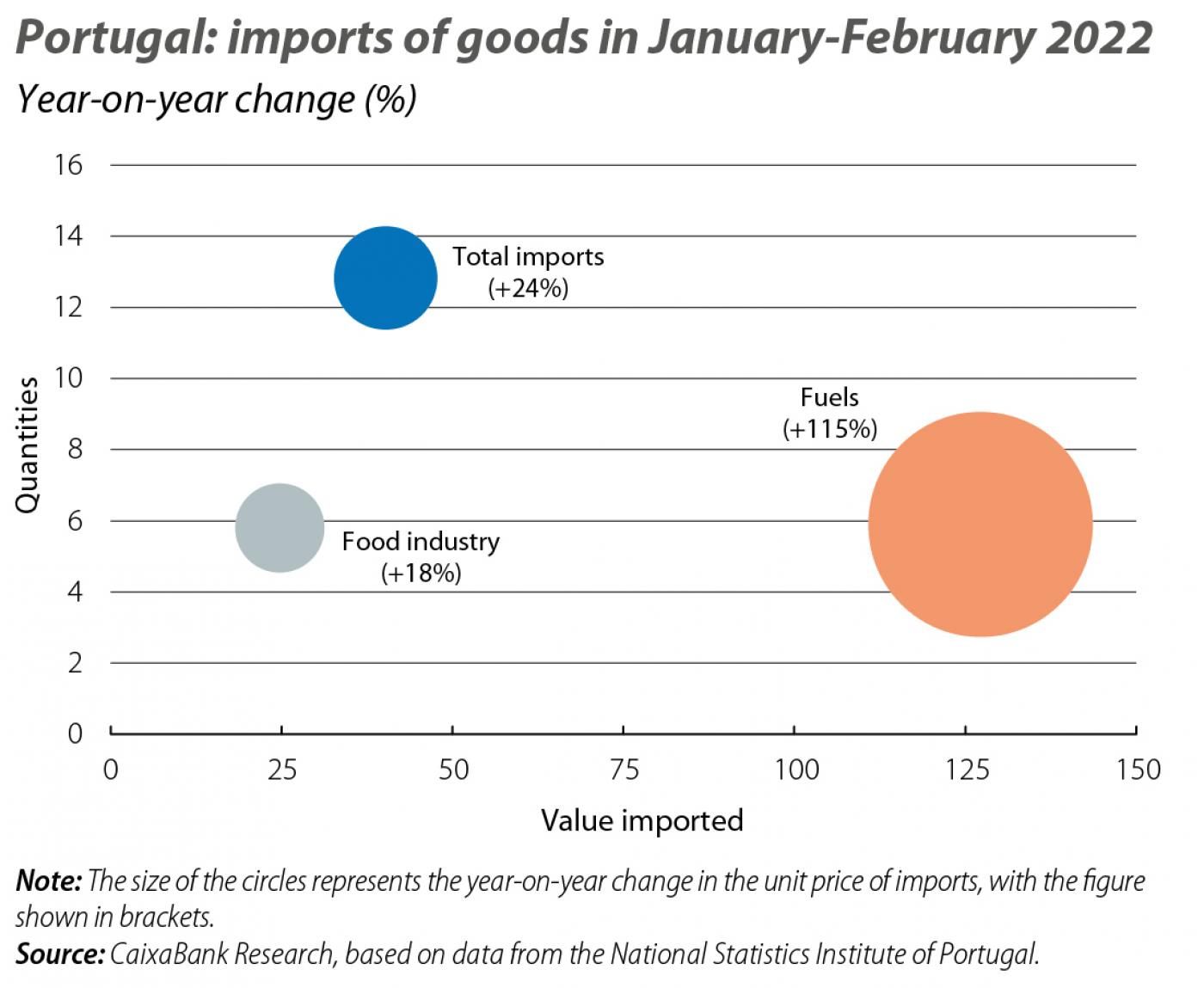 The banks forecast an increase in demand for credit in Q2

The banks have reported an increase in demand from SMEs and a reduction in the case of large corporations in Q1. In turn, demand from individuals has increased for both consumer credit and other purposes. For Q2, the banks anticipate an increase in demand from SMEs, especially in the case of short-term loans, as well as from individuals, both for home purchases and for consumption. With regard to the concession criteria, the banks have revealed slightly less restrictive criteria for consumer credit and other purposes, and stable criteria for the remaining credit segments in Q1 this year. For Q2, the banks anticipate slightly more restrictive criteria only for loans to SMEs. The results of this survey suggest that the level of indebtedness could continue to rise. In February, the debt of the non-financial private sector amounted to 428.6 million euros (280.3 million for non-financial companies and 148.3 million for individuals), 1.7 million more than at the end of 2021. 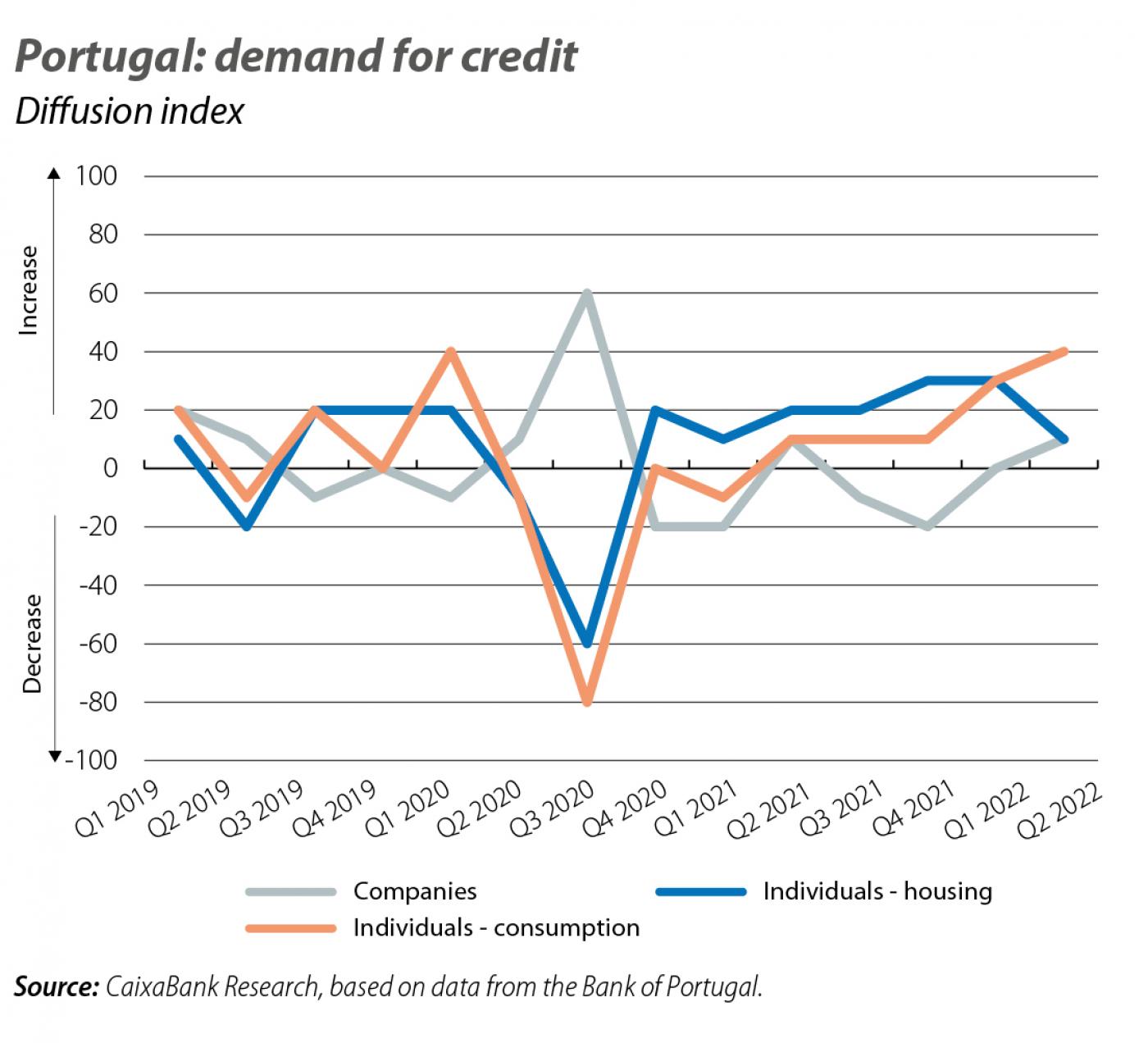 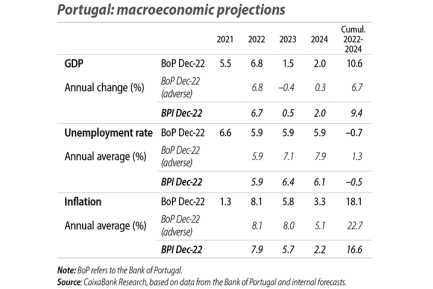 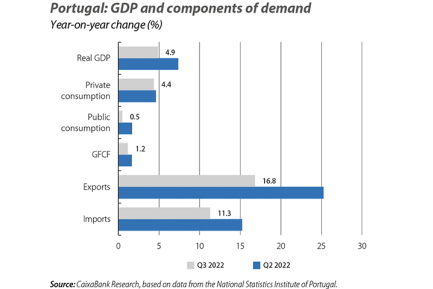