Portugal: strong resilience and the vaccine, key for 2021 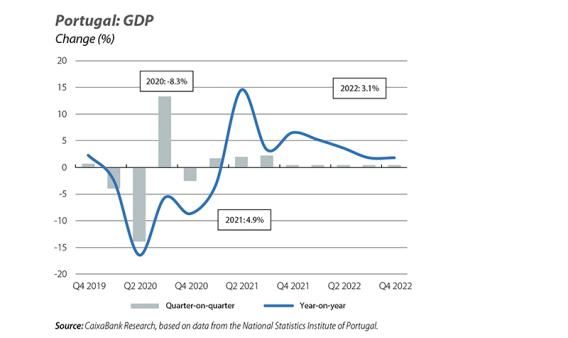 Temporary interruption of the recovery in Q4

Economic activity has shown a strong capacity to recover (GDP growth of +13.3% quarter-on-quarter in Q3, with a widespread revival of both domestic and foreign demand), but the second wave of infections is causing a temporary interruption of the recovery in Q4. Since October, there has been a reduction in the mobility indicators, although they remain well above the levels of April/May. Card payments also stabilised in October in year-on-year terms, while retail sales fell by 0.7% year-on-year and the growth of cement sales slowed significantly to 1.3% year-on-year. The data available for November are more scarce, but up until the 23rd, daily car sales had fallen by 36% month-on-month, while sentiment indicators for the month as whole also fell in all sectors. Overall, the data suggest a drop in GDP in the closing weeks of the year, but with a clearly more gradual and less significant decline than in the spring (we expect GDP to contract by 2.6% in Q4). Nevertheless, since the rebound in economic activity in Q3 was stronger than expected, we have improved our GDP forecast for 2020 as a whole to –8.3%. In addition, the economy is expected to settle into a more sustained growth path in 2021, supported by mass vaccination and testing, a certain revival of tourism activity and support from domestic and European economic policy. Thus, we project GDP growth of around 5% in 2021. However, the economic and health environment remains highly uncertain and, beyond the initial rebound, the economy will take time to recover to pre-pandemic levels. It will therefore be very important to ensure that the economic policy measures are fine-tuned and properly implemented, especially those included in the European Recovery and Resilience Plan, and that they are appropriate in order to boost underlying economic growth. 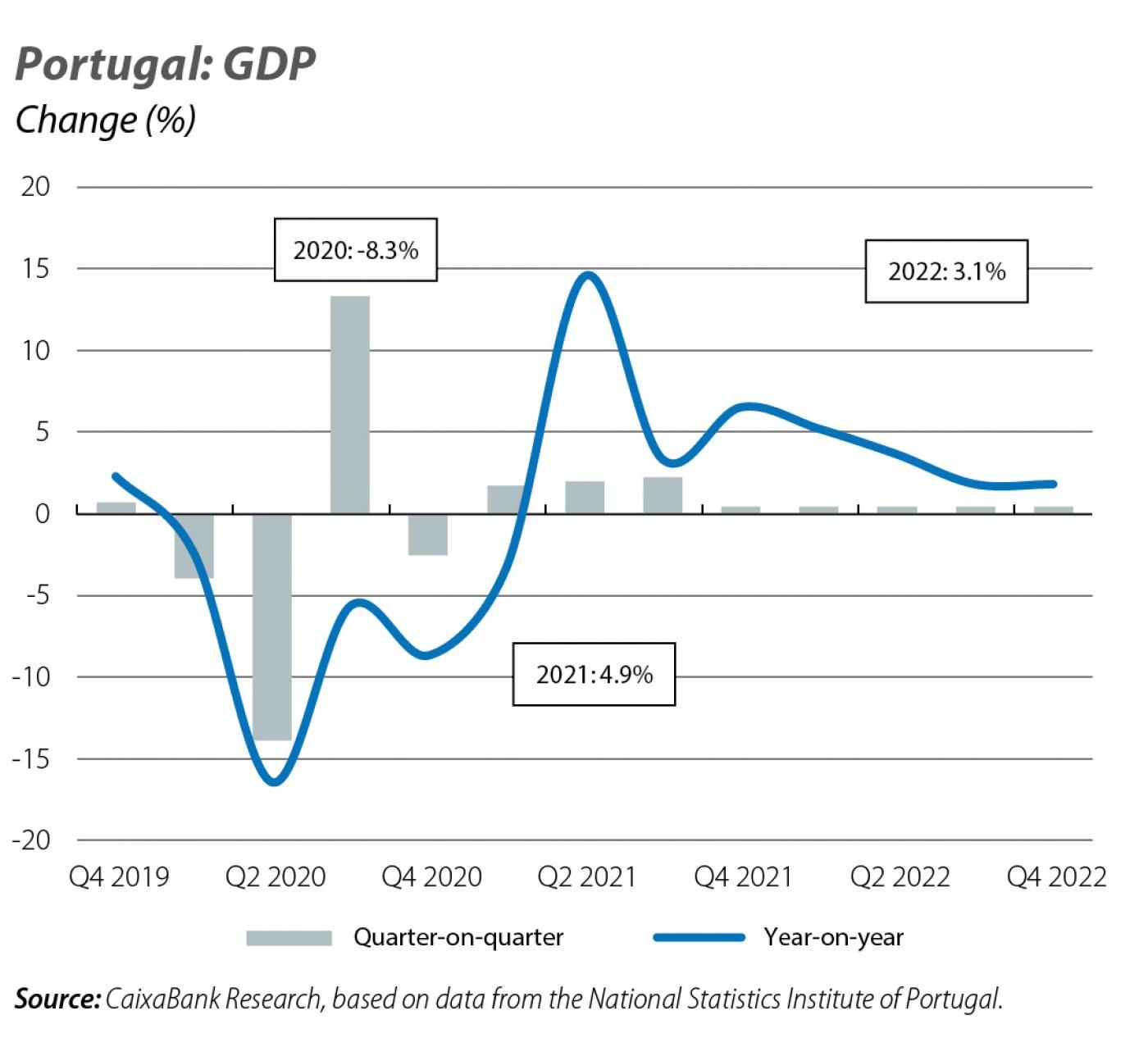 Employment remains below pre-pandemic levels, but in October the number of people in employment rose in month-on-month terms for the fifth consecutive month. Job offers have followed a similar trend, although the impact of the pandemic on the labour market continues to be felt, with the unemployment rate reaching 7.5% in October (+1.1 pps compared to February). Moreover, unemployment is likely to rise over the coming quarters as the restrictions on redundancies imposed in the wake of the COVID-19 emergency are relaxed and the economic scars of the pandemic begin to emerge. 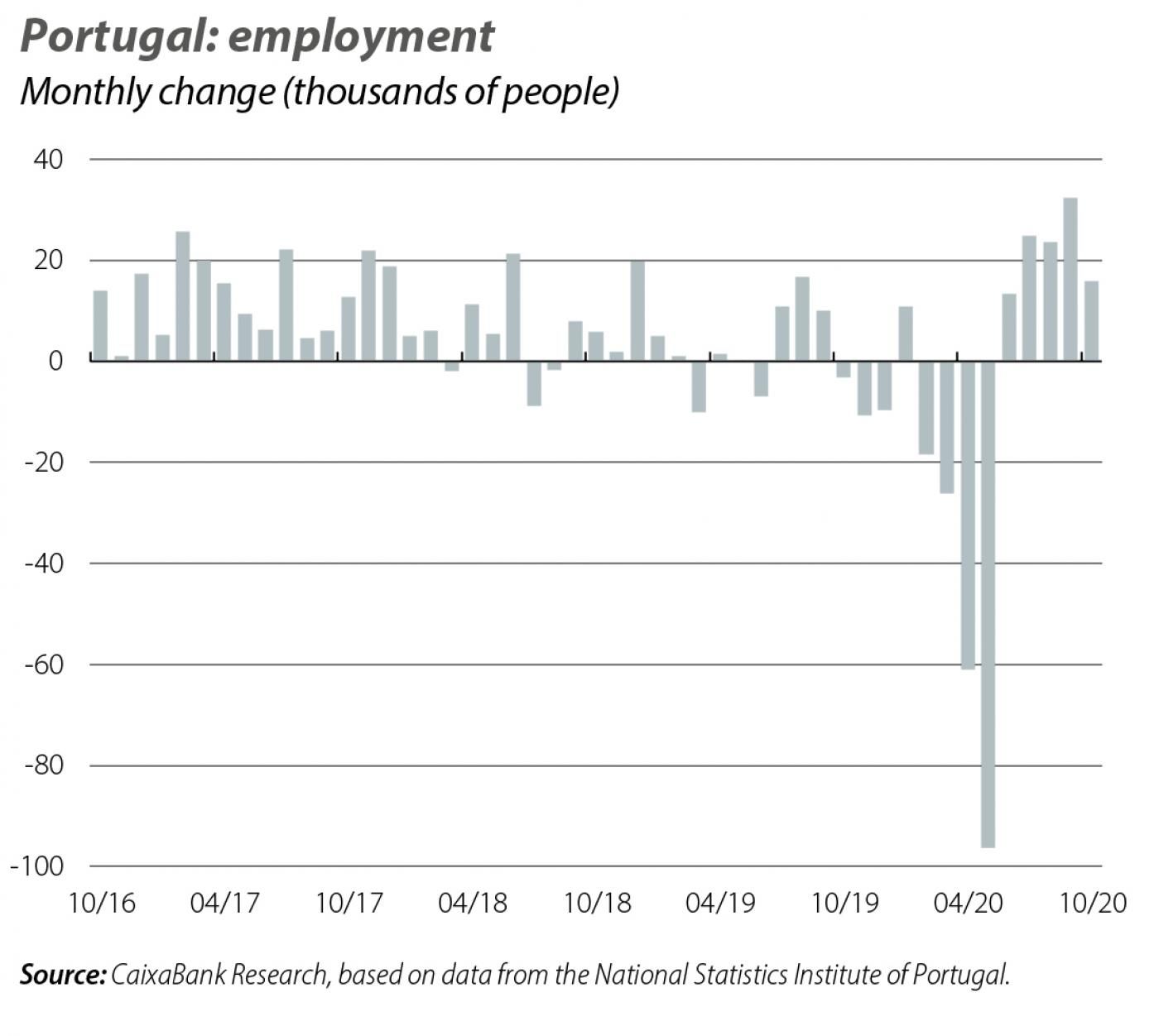 The pandemic deteriorates the public accounts

The public policy action taken to support households and businesses during the pandemic is taking a heavy toll on the public accounts. With data up to October, the expenditure-related measures had totalled 2,356 million euros, while the measures to postpone, suspend and provide exemptions for tax payments account for the reduction of around 1,508 million euros in revenue collection. In this context, the general government deficit for the first 10 months of the year as a whole stood at 4.3% of GDP, with a 6.4% decline in revenues and a 5.1% increase in expenditure. The pressure on the public accounts will continue through to the end of the year and we expect the deficit to reach around 7% of GDP for 2020 as a whole. In 2021, it should gradually reduce to slightly below 6% thanks to the economic revival, although uncertainty is high and the pandemic will continue to affect the public accounts. 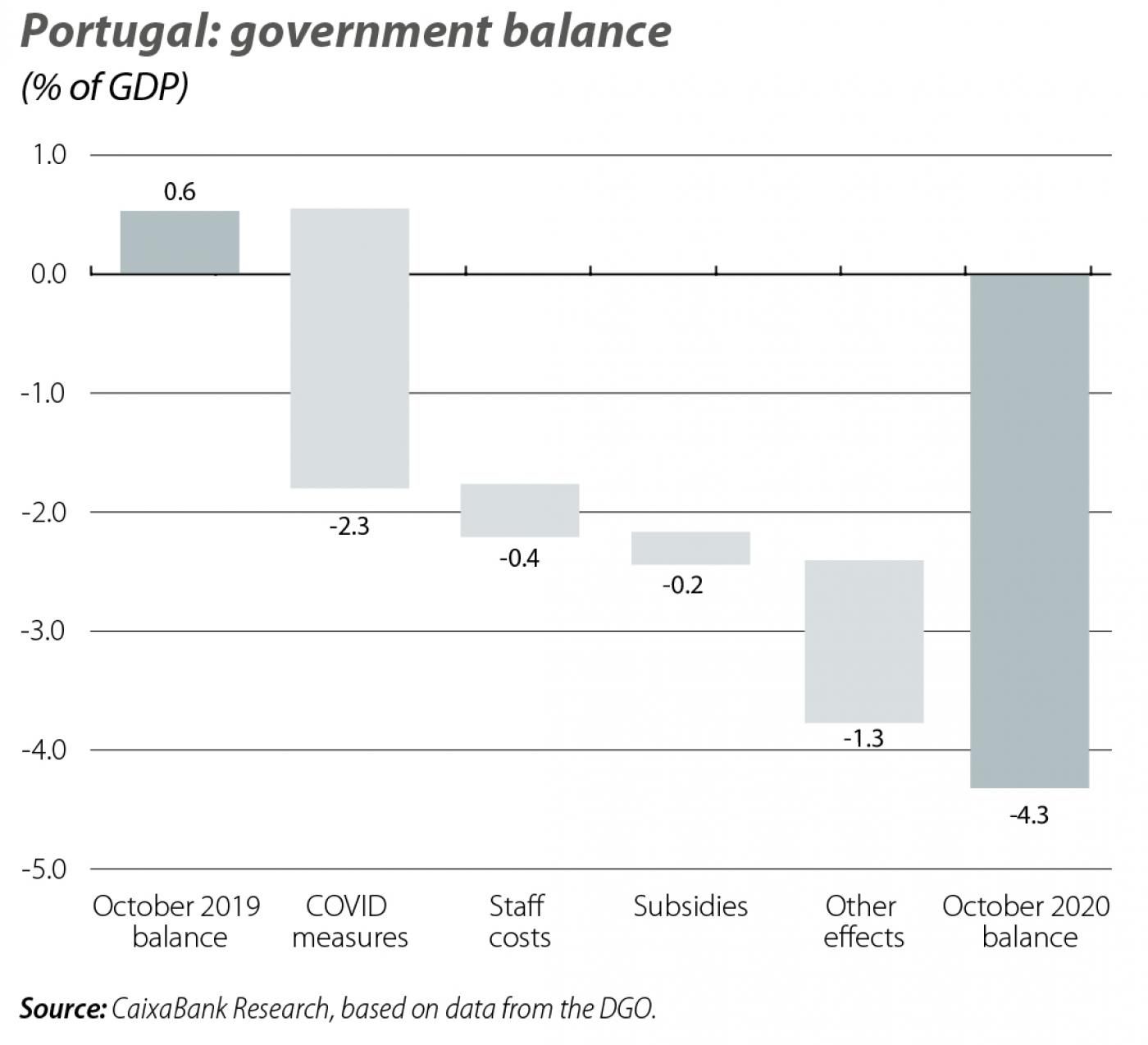 The current account deficit continued to rise in September

The current deficit stood at 2,434 million euros (12-month cumulative balance). In GDP terms, the balance stood at –1.2% of GDP, representing a 0.1-pp higher deficit than in August and 0.9 pps higher than a year earlier. Among other factors, this deterioration reflects the pandemic’s impact on international tourism. Specifically, the tourism surplus stood at +3.2% of GDP, compared to 6.1% a year earlier.

Whilst new lending for housing increased by 3.1% year-on-year in September, bringing it to around 9% above pre-pandemic levels, new lending to firms fell by 15.3% year-on-year (7% below the figure for February) and new consumer lending fell by 16.4% (around 18% below the pre-pandemic level). This reflects the lower confidence among households and the worsening outlook for unemployment over the next 12 months. However, thanks to debt moratoriums, the stock of credit has continued to grow in all segments. In fact, in September credit moratoriums reached a total of 751,725 contracts, particularly benefiting housing credit and other mortgage loans (which accounted for over 42% of the total). In addition, the period for accessing moratoriums was recently extended until March 2021. 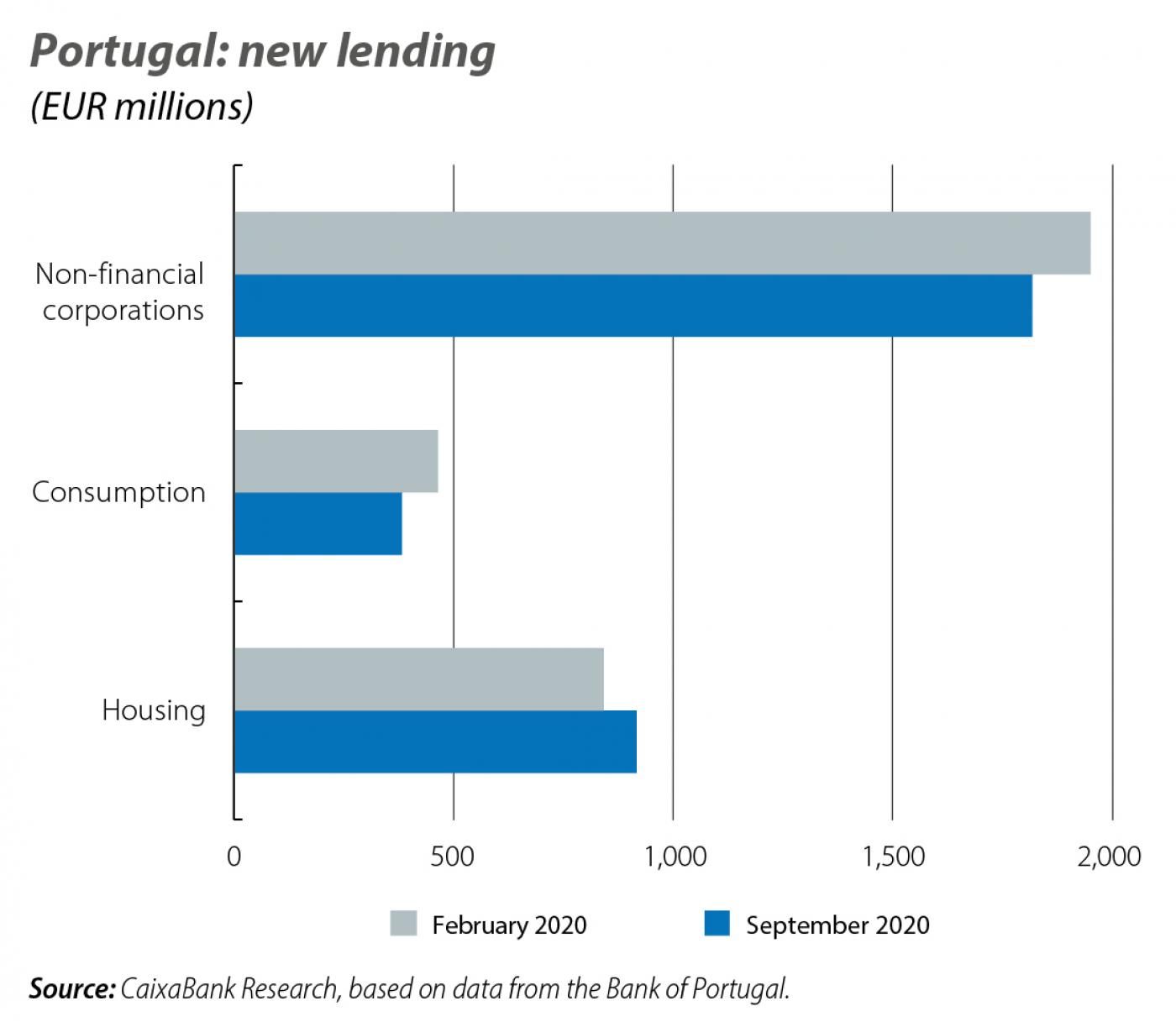 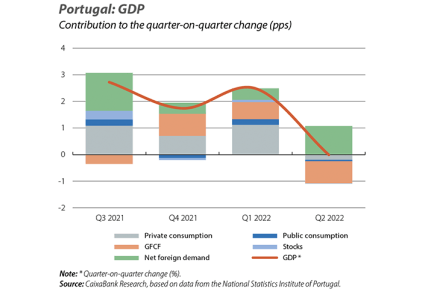 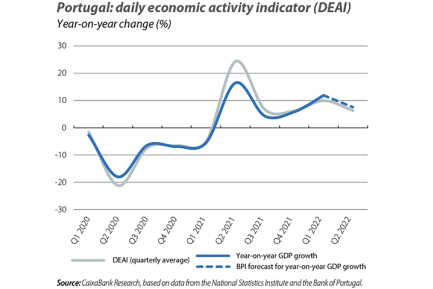