Positive outlook despite the slight slowdown in growth

A solid period in the cycle for the euro area economy. The macroeconomic environment of the euro area has improved substantially over the last few quarters and is now showing stronger and more even growth, with the main countries growing at a rate of over 2% (with the exception of Italy). Domestic demand remains buoyant, supported by the accommodative monetary policy of the ECB and the improvements in the labour market, while exports are benefiting from greater global growth. As such, the cyclical trend in the growth of the euro area continues, and no major supply restrictions (such as difficulties in expanding production or hiring workers) have yet arisen to hinder it. In view of this, the IMF has revised its growth forecast for the euro area in 2018 upwards to 2.4%, 2 decimal points higher than the estimate of three months ago. By country, the improvement has been widespread, with notable upward revisions in Germany (+0.2 pps to 2.5%), France (+0.2 pps to 2.1%), Spain (+0.4 pps to 2.8%) and Portugal (+0.4 pps to 2.4%). The short-term risks are also balanced, although in the medium term the threat of a possible trade war with the US has arisen, in addition to the existing geopolitical risks and the risk of a further tightening of financial conditions. In any case, we anticipate that the rate of growth of the euro area will reduce only gradually to below 2% in 2020, constrained by the relatively low growth in productivity and the ageing of the population.

Temporary slowdown in growth in Q1. Most of the economic indicators (such as PMI and ESI) available for the first three months of the year indicate a lower rate of growth in Q1 2018. Industrial production, for example, increased at a slower pace in the months of January and February (3.5% versus 4.0% in Q4 2017). In France, for which GDP data is already available for Q1, quarter-on-quarter growth reached 0.3%, lower than the 0.7% of Q4 last year. Following on from this, economists reduced their outlook due to temporary factors such as adverse weather conditions and the uncertainty surrounding a possible trade war with the US, as well as political uncertainty in relation to the formation of a government in Germany. Nevertheless, several of the economic indicators available for the month of April indicate that the slowdown in the first few months of the year has stopped in Q2. Specifically, the composite PMI for the whole of the euro area remained at 55.2 points, the same figure as in March and well within expansive territory (above 50 points). Furthermore, composite PMI was slightly higher than in the previous month both in Germany and in France (55.3 and 56.9 points, respectively). In addition, the economic sentiment indicator (ESI) developed by the European Commission stabilised at 112.7 points in April, the same level as in the previous month.

Private consumption in the euro area continues to rise. Retail sales rose by 1.8% in February year-on-year, a slightly higher rate than in January (1.5% year-on-year). Consumer confidence also remains high. Specifically, the consumer confidence index developed by the European Commission stood at 0.4 points in April, higher than in the previous two months (0.1) and than the average for 2017 (–2.5). This figure suggests that private consumption in Q2 2018 will continue to be one of the main drivers of growth in the euro area.

Inflation continues its steady rise in March. The harmonised index of consumer prices (HICP) for the euro area rose to 1.3% year-on-year in March, 2 decimal points higher than in the previous month. The increase is mainly due to the greater contribution from food prices, both among processed and non-processed foods. On the other hand, core inflation also stood at 1.3%, 1 decimal point higher than in February. Here at CaixaBank Research, we expect inflation to continue to follow an upward trend over the coming quarters, supported by the positive trends in the economy and the rise in oil prices, before gradually converging on the target inflation rate in 2019, albeit still below 2%.

Momentum in lending activity supports growth. The bank lending survey of the ECB shows that the demand for credit increased across all segments in Q1 2018. The survey also indicates that the conditions for access to credit improved significantly, particularly in terms of credit for companies and for home purchases. In this context, both companies and households are benefiting from greater access to credit, partly due to greater competition and a reduction in the perception of risk by banking institutions. The results of the survey also suggest that supply factors will not restrict the growth of lending in the short term.

The fiscal adjustment in the euro area continued in 2017, supported by the strong momentum of the economy and the reduced spending on interest charges. The budget deficit of the euro area reduced to 0.9% of GDP in 2017, 0.6 pps below the level registered in 2016 (1.5%) and close to the level of 2007 (0.6%). In addition, the public accounts of several countries in the euro area are already in surplus, and the countries that experienced the highest deficits during the financial crisis have reduced them considerably. France, for instance, has reached its lowest budget deficit in the last decade in 2017 (2.6% of GDP), and it expects to reduce it to 2% in 2018 and 2019. This represents a fiscal discipline not seen for years, supported by the growth of the economy. Public debt in the euro area as a whole, meanwhile, stood at 86.7% of GDP in 2017, a reduction of 2.3 pps compared to 2016 (89.0% of GDP). However, while the deficit has reduced to levels close to those recorded prior to the financial crisis, the level of debt remains 21.7 pps above that of 2007. It is, therefore, important that those countries with high levels of public debt commit to reducing them faster in order to bring them down to more sustainable levels before the next economic crisis hits.

Moderation in the pace of growth in Q1. Pending the GDP data for the first quarter of the year, the economic indicators point towards a slight slowdown in the pace of progress. In particular, the coincident indicators for economic activity and for private consumption in March rose by 1.8% and 1.9%, respectively, lower than in the preceding months. Despite this slowdown, the indicators are still high, suggesting that growth should remain buoyant in 2018. In addition, the good performance of the Portuguese economy, which is making a significant contribution to correcting the macroeconomic imbalances, has been ratified by a new upward revision of the country’s credit rating (by the Canadian rating agency DBRS).

The labour market continues to gradually improve. There is no better demonstration of the turnaround in the Portuguese economy in recent years than the progress of its labour market. Employment has increased by half a million people since 2013, reaching 4.7 million people in employment in 2017. The pace of job creation also remains high, and in February it increased by 3.0% year-on-year. The unemployment rate, meanwhile, fell to 7.4% in March, and is at its lowest level since 2004. With regards to the next few quarters, we expect the progress in the labour market to continue and the unemployment rate to fall below 7% in 2019.

The current account surplus has reduced slightly, reflecting the deterioration in the balance of goods and income. Specifically, in February, the deficit in the cumulative trade balance of goods reached 12,500 million euros for the 12-month period (+23.4% higher than the deficit recorded in the same period last year). This greater deficit is largely due to the strong increase in imports of transport equipment and capital goods, as a result of increased activity in the Portuguese economy. However, the surplus of the balance of services continues to grow. In February, it increased to 15,900 million euros, an improvement of 17.5% compared to the previous year. This improvement reflects the strengthening of the Portuguese tourism sector, although it was not enough to offset the deterioration in other balances. On the other hand, the balance of primary and secondary incomes registered a deficit of 2,900 million euros, as a result of lower incomes received from Portuguese investment abroad. 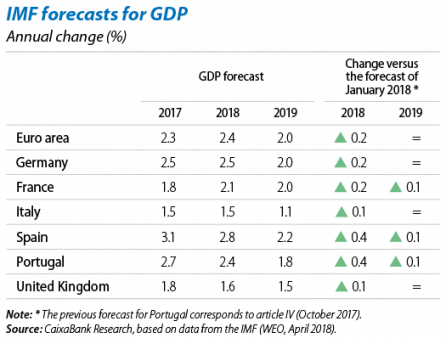 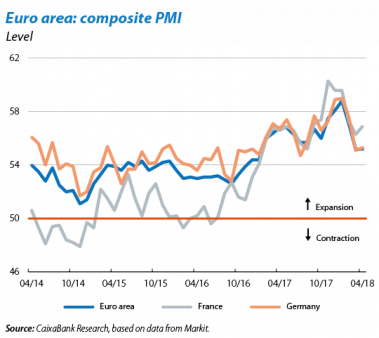 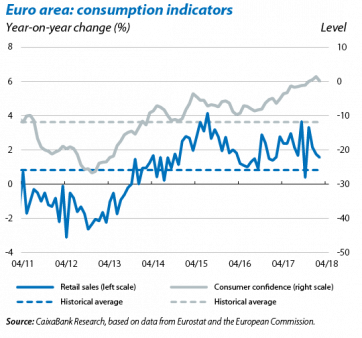 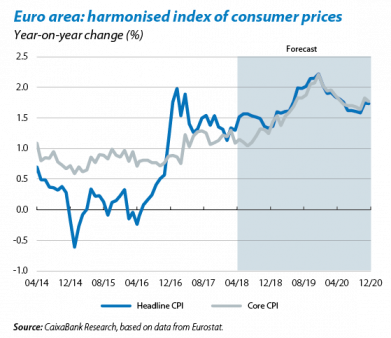 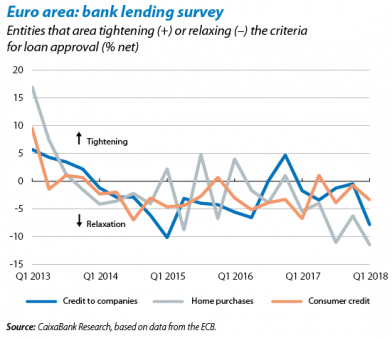 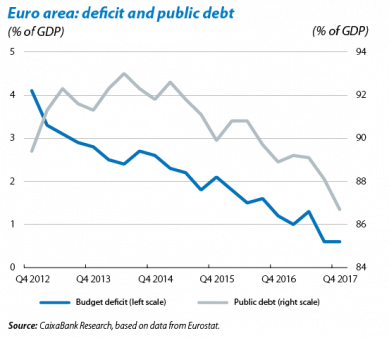 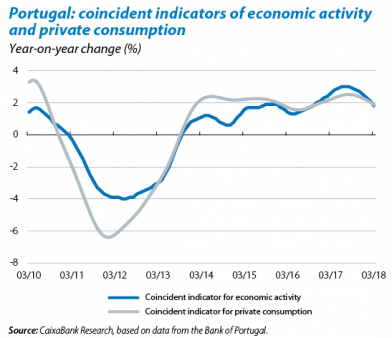 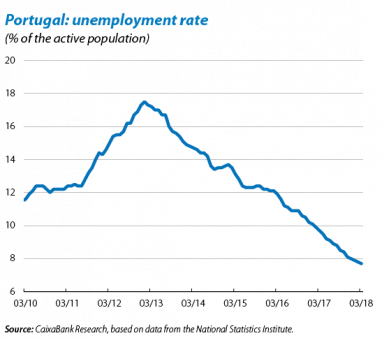 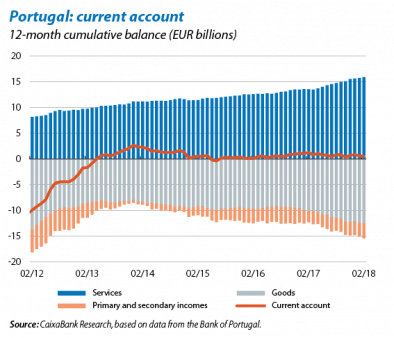