The euro area's recovery is advancing according to expectations: slowly and with differences between countries. The GDP figures for Q3 showed weak growth in the euro area of 0.2% quarter-on-quarter (0.1% in Q2). Of note is the progress being made by Spain of 0.5% quarter-on-quarter, far above the figure for the euro area as a whole, whereas the Italian economy continued to shrink. This time the figures came as a pleasant surprise for France, with higher growth than expected albeit thanks to public spending and the accumulation of stocks, difficult motors to sustain. Germany grew by 0.1%, allaying fears of a recession after its slight dip in Q2. Over the next few months we expect the euro area's recovery to continue, supported gradually by falling oil prices, the depreciation of the euro and the revival in credit (due to monetary policy measures and the publication of the results from the bank asset quality review, as well as the stress tests carried out by the ECB).

The European Commission revises its growth for the euro area downwards. Specifically it predicts that the euro area will grow by 0.8% in 2014 and 1.1% in 2015. Domestic demand, less vigorous than expected, and the materialisation of risks that existed in the first half of the year (a drop off in world trade, conflicts in the Ukraine and Middle East) have led to this revision. The EC expects a slow recovery in 2015 supported by domestic demand and in particular by investment given the situation of accommodative monetary policy, the improvement in financing costs and less need for deleveraging. The EC itself will boost this recovery via the Juncker plan whose measures aim to encourage private and public investment, within an environment of abundant liquidity that is nevertheless not resulting in funding for new projects. The plan creates the European Fund for Strategic Investments (EFSI) with an expected financial capacity of 315 billion euros to invest in long-term projects (strategic infrastructures, transport, R&D, etc.) as well as to support loans for SMEs. Nevertheless, the success of the EFSI will depend both on how the plan operates and selects projects as well as the capacity to absorb losses of any public capital invested, which is a priori limited. In its European Semester, the EC has warned seven countries that they may not meet their public deficit targets for 2015, while Belgium, France and Italy are also open to sanctions if they do not take additional measures to correct their deficit levels (see the Focus «Are France and Italy taking the right measures?»).

Moderate growth in euro area activity. In the EC's opinion surveys carried out on the manufacturing sector, companies have reported a slight slowdown in industrial orders although these are still in positive figures. The same conclusion of moderate growth can be drawn from the composite PMI for the euro area which is still in the expansionary zone but below its average for Q3. This stability hides different trends depending on the sector (growth in industry and retail activity, no change in services and deterioration in construction) and country (improvements in France and Spain, a decline in Germany and Italy).

Demand indicators stabilise. In September, retail sales moderated their rate of growth but remained in positive figures while the series' trend shows that sales have risen by close to 1% year-on-year since the start of the year. Nevertheless, the slowness of the euro area's recovery does not seem to producing more optimistic consumers, whose confidence indicator fell in November. This pessimism should dissipate as the recovery consolidates and the labour market improves. For the moment, however, the unemployment rate is falling very slowly. In October unemployment held steady at 11.5%, below the figure of 11.9% recorded a year ago but unchanged compared with the two previous months. Unemployment expectations are not pointing to any significant improvement over the coming months either.

Germany: private consumption is driving the recovery. Details of Germany's GDP growth in Q3 allow us to be optimistic. Although quarter-on-quarter growth was moderate, both private consumption and exports grew strongly. The negative contribution by investment and stock changes caused the country's exceedingly moderate growth rate in Q3. However, judging by the more favourable trend in November's higher frequency indicators, such as the IFO and ZEW, investment should pick up in the last quarter of the year. Moreover the breakdown of German GDP in Q3 shows more balanced growth (the contribution by domestic and foreign demand was 0.3 pps and 0.2 pps, respectively). The dynamism of private consumption should continue given the good performance by Germany's labour market with unemployment at an all-time low (4.9% in November) and low interest rates for new loans to households for housing and consumption (also rock bottom), dispelling concerns that German activity, the driving force of the euro area, might stagnate.

Robust growth in emerging Europe. In spite of the uncertainty caused by the Russia-Ukraine conflict and the relatively moderate economic tone of the euro area, the recovery being made by emerging Europe is surprisingly robust. One significant reason is the resistance of its domestic demand and particularly investment. The rise in Germany's private consumption may have also played its part in this good performance by emerging Europe due to their close ties. With a view to the coming year, we expect this group of countries to continue growing by about 3% as a whole, supported especially by Poland's dynamism, the largest of these economies.

Inflation remains weak. In November inflation fell by 0.1 pps to 0.3% due to the drop in energy prices. By country, the
data for October, the latest figures available, showed notable differences, this being lower in Italy and Spain (negative for the latter). In the short term the drop in oil prices is expected to continue pushing down inflation, especially given the lack of agreement to restrict production by the OPEC countries. Core inflation, not affected by the energy, remained low at 0.7%, reflecting the weak tone of economic activity. However, in spite of it pushing down inflation, cheaper oil is not bad news for the euro area which is a net imp importer of oil, as this considerably reduces production costs, improving its competitive position and households' purchasing power.

The foreign sector is picking up. The euro area's trade balance posted a surplus of 2.5% of GDP in September (cumulative over 12 months), continuing the improvement of August. This growth is partly due to the increase in the surplus of goods (thanks to improved exports) and, to a lesser extent, to services, bolstering the foreign sector's role as the driving force behind the recovery. Moreover the recent depreciation of the euro against the dollar should help to boost sales abroad, reducing the final price of the goods produced, especially in countries such as France and Italy (see the Focus «The sensitivity of the euro area's exports to exchange rate movements»). The foreign sector will therefore become more important again over the next few months. This more positive prospect can also be inferred from the latest EC opinion surveys. In general, companies are more optimistic about their export expectations, with indices above the historical average.

The improvement in credit capacity will support the recovery. The results of the survey on companies' access
to financing in the euro area suggests that their financial situation has improved over the last six months, partly as a result of the rise in the number of firms, up by 10%, that have increased their turnover. At the same time the ECB's more expansionary monetary policy has helped the cost of loans for companies and households to fall gradually (also narrowing the gap between countries). Although financial fragmentation is still notable, it is much less than a few months ago. For example, while German enterprises paid 2.6% interest on their loans below one million euros in September, Spanish firms paid 4.2%. One year ago the interest rates were higher and more disparate, namely 2.8% and 5.0% respectively. Over the next few months we expect the credit capacity of the banking sector to go on improving and the defragmentation process to continue. Improved credibility in the banking sector as a result of the favourable results from the stress tests carried out by the ECB on banks will help this to be the case. 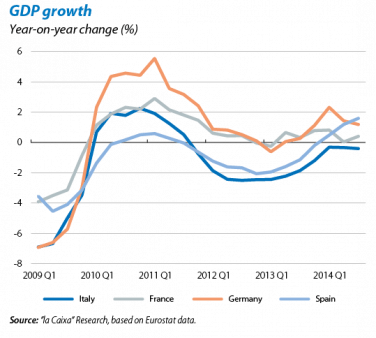 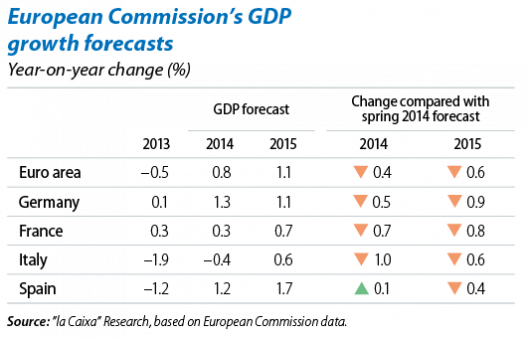 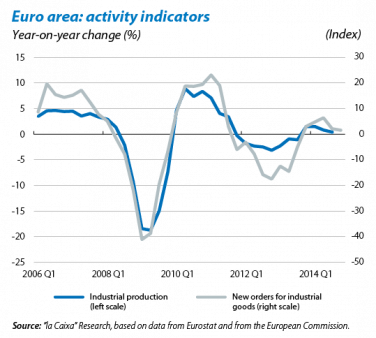 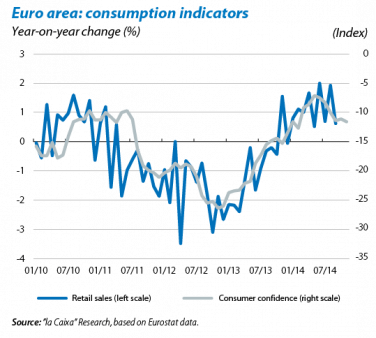 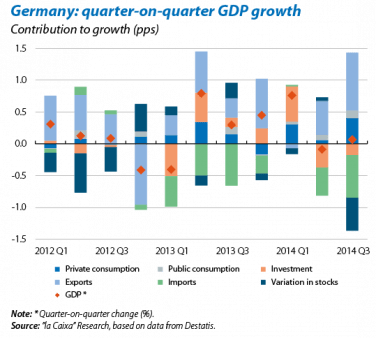 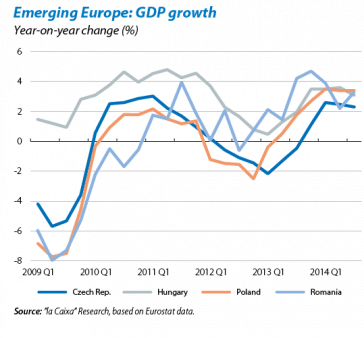 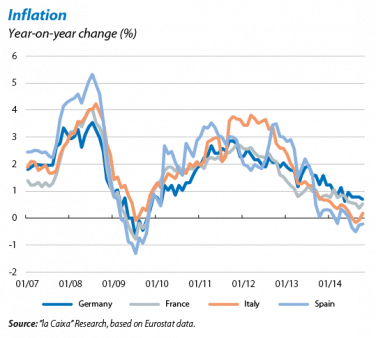 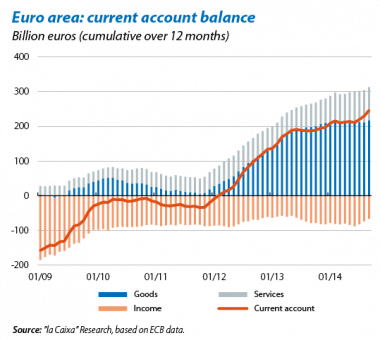 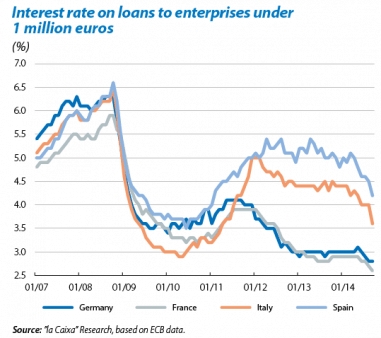