Spain: a difficult start to the year 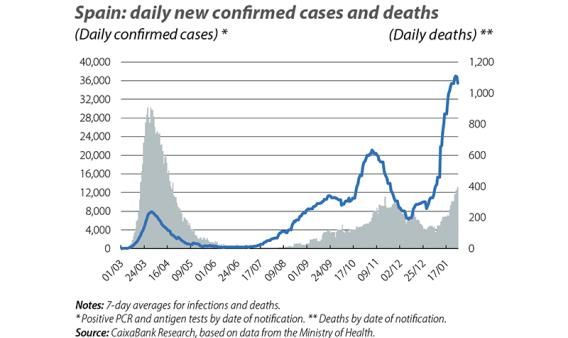 The third wave of infections dominates the beginning of the year

The return from the Christmas holidays has been accompanied by a new and significant surge in COVID-19 infections. This third wave, aggravated by the emergence of a new, more contagious strain of the virus (the British variant), has forced authorities to re-impose mobility restrictions similar to those implemented last November. The current incidence of the virus is greater than in the last quarter of 2020 (for instance, the number of new confirmed cases was approaching 36,000 a day at the time of writing, whilst the peak reached during the second wave was just over 20,000 at the beginning of November). However, the latest data show that the measures taken to curb the spread are beginning to take effect. Whereas in January the seven-day average of the percentage of positive coronavirus tests rose continuously until it reached 18% in the week of 16-22 January, this percentage has already begun to decline and stood at 16% in the week of 23-29 January. Meanwhile, the roll-out of the vaccine among risk groups continues, and although the main risk groups would not be immunised until early summer at the current rate of vaccination, we can expect to see a certain acceleration as the vaccines’ production and distribution rates increase. In addition, for the rest of the population, the reduced logistical complications should facilitate a quicker roll-out. Despite the restrictions imposed in Q4 2020 to curb the second wave of COVID-19, the economy managed to continue to recover at a modest rate in the closing stages of the year. Economic activity grew by 0.4% quarter-on-quarter, leaving GDP 9.1% below the level of Q4 2019. Moreover, unlike the previous quarter, in Q4 the Spanish economy performed better than other euro area countries, possibly because the measures imposed to contain the spread of the virus were less severe in Spain than in other countries. However, the breakdown by component shows some signs of fragility in the recovery. Whereas in Q3 the expansion was widespread across the various components, in Q4 there was growth in private and public consumption (2.5% and 4.0% quarter-on-quarter, respectively) but not in investment or exports, which fell by 3.1% and 1.4% quarter-on-quarter, respectively. With this first estimate of GDP in Q4 2020, the fall in GDP for 2020 as a whole compared to 2019 is 11.0%, an unprecedented figure which shows the severity of the pandemic’s impact on the economy. 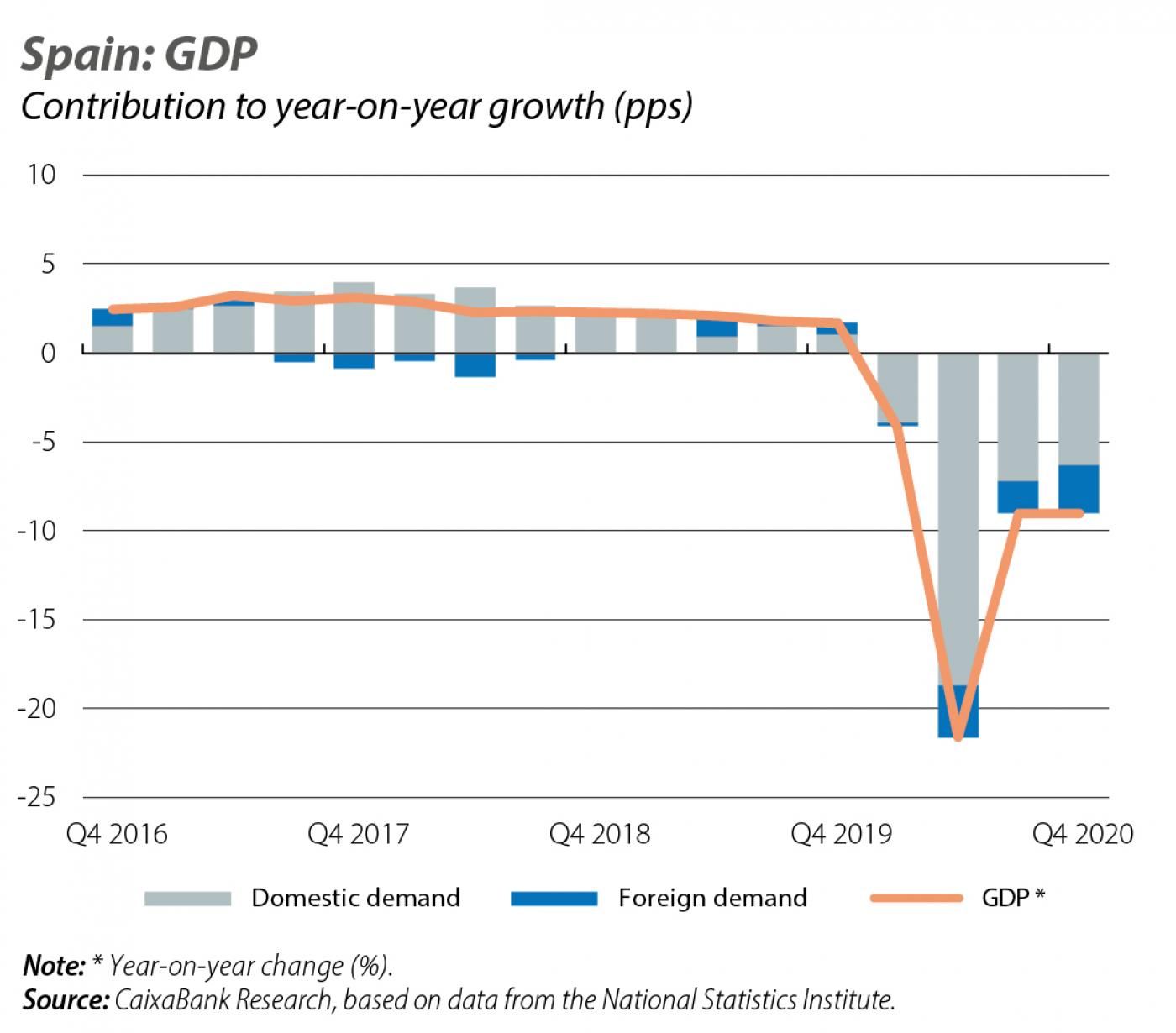 The recovery in economic activity stagnates in January

There are still few economic activity indicators available to shed light on the economy’s performance in the first quarter of the year. However, CaixaBank’s consumption indicator fell by 9% year-on-year on average in January, a figure equal to the average for the months of November and December. Also, between 7 and 26 January, Google’s indicator for mobility in shopping centres stood 47% below the baseline mobility level (mobility registered in the first two weeks of February 2020). This figure is worse than in November (–38%), reflecting the impact of the mobility restrictions. In addition, during the week of 20 to 26 January, mobility around workplaces was 28% below the baseline level, as well as below the figures for November (–21%). Thus, the set of indicators available so far suggests that economic activity could be around the levels of November. If the indicators continue to show the same picture throughout the quarter, GDP could remain flat, or even show a slight decline in Q1 2021. 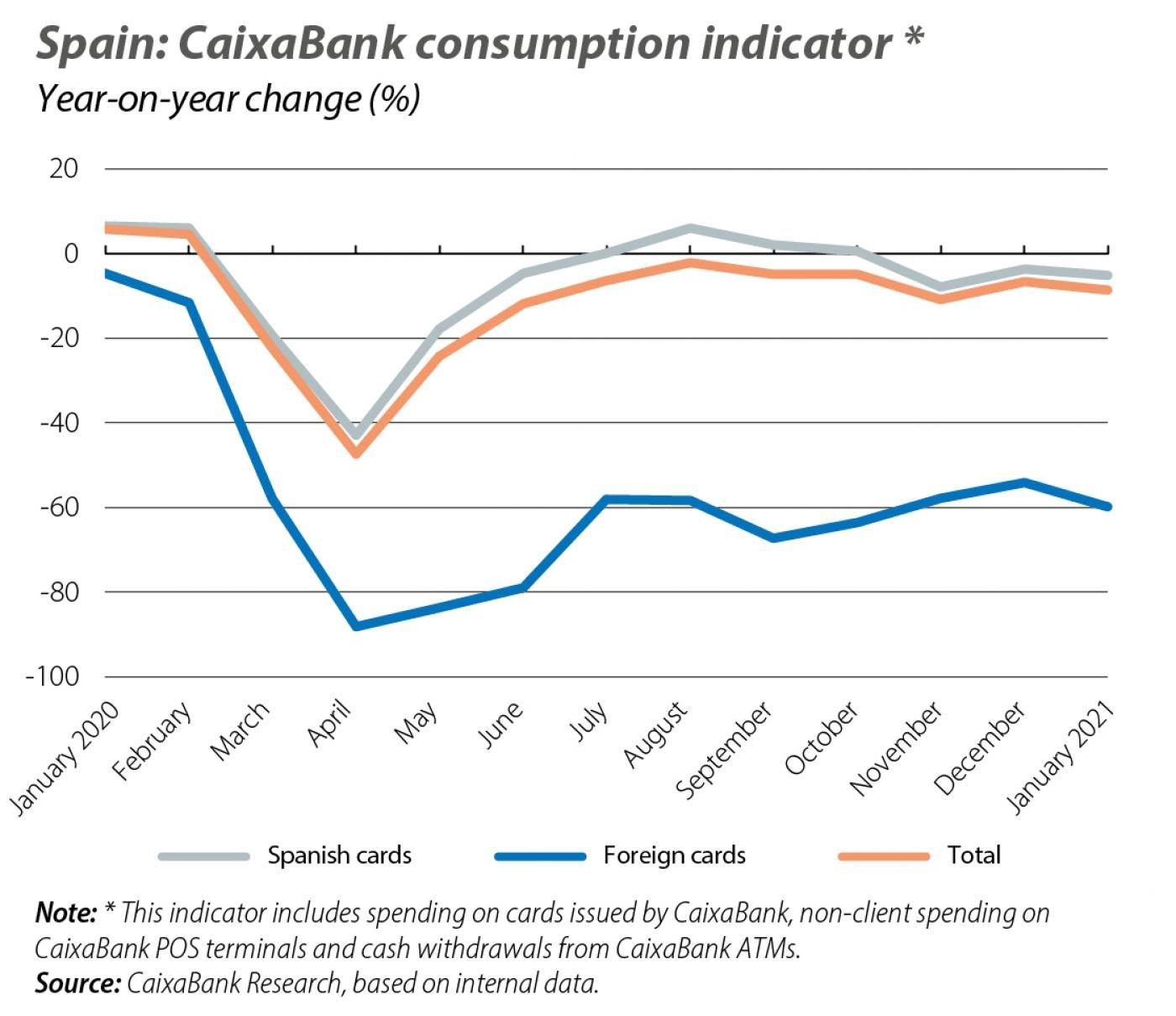 The labour market continues to be affected by the COVID-19 pandemic, although it showed encouraging performance in Q4 2020

According to the Labour Force Survey (LFS), employment increased by 167,000 people in Q4 (+0.9% quarter-on-quarter and –3.1% year-on-year) and offset part of the loss of employment in the first half of the year, moderating the reduction in employment compared to Q4 2019 down to 623,000 people. These figures provide only a partial view, since the National Statistics Institute (NSI) considers workers on furlough to be still employed (following recommendations from Eurostat and the ILO, since there is a guarantee of return to the job after the end of the suspension period). Thus, the actual number of hours worked, which provides a more reliable indicator of economic activity, fell by 6.1% year-on-year in Q4, down 1.1 pps from Q3, corroborating the good performance of the labour market in the closing stages of 2020. The number of unemployed people, meanwhile, remained virtually stable (–3,000 people) and the unemployment rate stood at 16.1%, slightly lower than in Q3 (–0.2 pps). For 2020 as a whole, the unemployment rate was 15.5%. While this represents a significant increase over 2019 (14.1%), it is much lower than expected by the consensus of analysts (17.8% last September, according to the Funcas consensus), indicating that the ERTE furlough schemes have worked well. The CPI registered a year-on-year change of 0.6% in January (–0.5% in December) driven by electricity and food prices, which have registered a bigger rise than a year ago. On the other hand, the NSI also published the leading indicator for core CPI for the first time, according to which core inflation stood at 0.6% year-on-year in January (+5 decimal points compared to December). With weak demand, inflation is expected to remain moderate over the coming months. 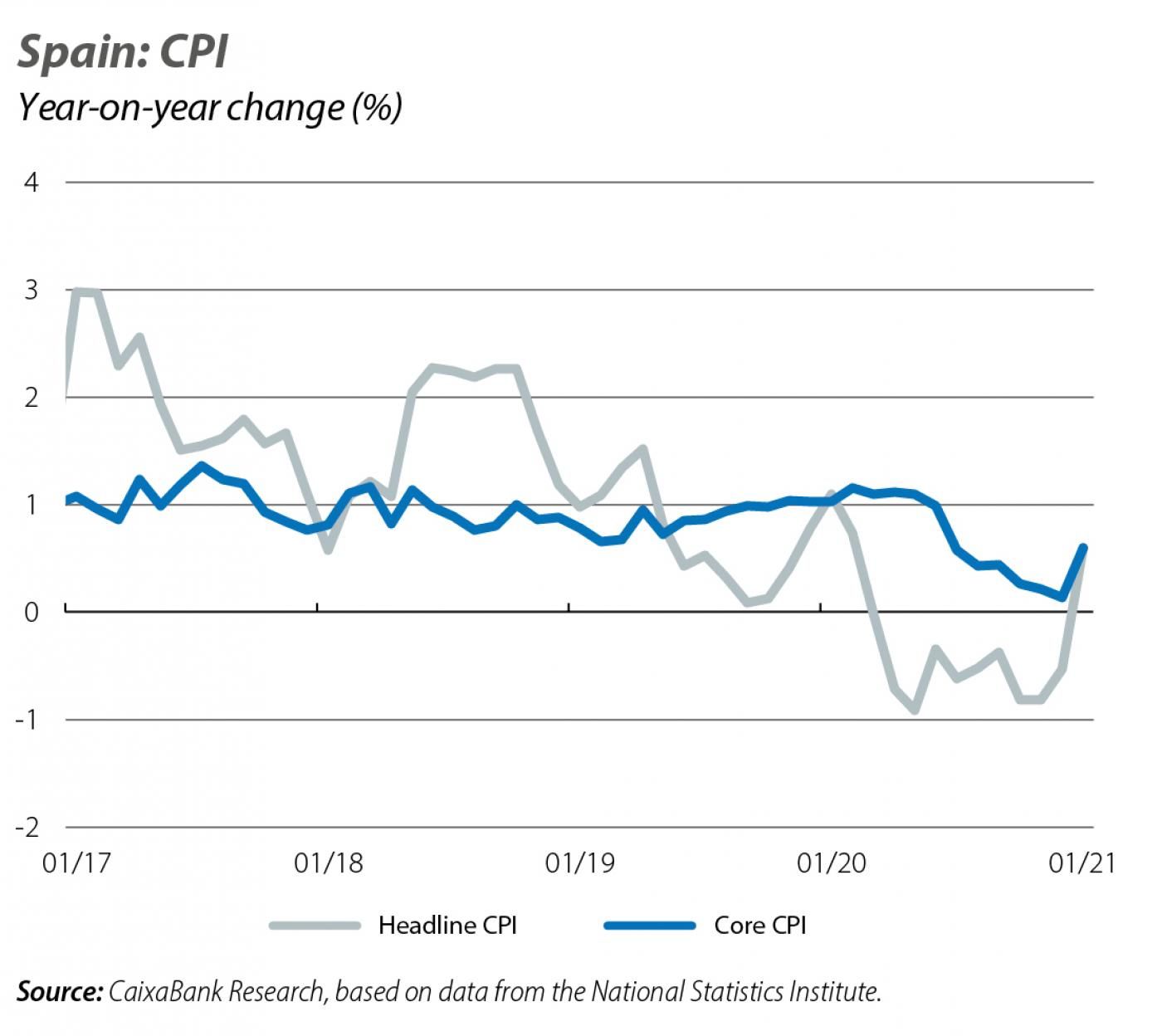 Slight improvement in the trade balance in November

The deficit in the balance of goods stood at –1.3% of GDP (12-month cumulative balance), an improvement of 1.4 pps compared to the figure a year earlier. Half of this improvement was due to the lower energy deficit, as a result of both lower energy demand and the oil price, which was still down in year-on-year terms. The other half was due to a greater decline in non-energy imports than that registered among non-energy exports (−11.0% compared to −8.1% year-on-year, respectively).