Economic activity ended 2019 on a good note. The growth of the Spanish economy stood at 2.0% in 2019, a lower rate than that of 2018 (2.4%) but nonetheless buoyant and higher than that of the euro area (1.2%). This result is slightly better than expected (1.9%), driven by the strong GDP figure for Q4 2019, which marked a rise of 0.5% quarter-on-quarter (1.8% year-on-year), 1 decimal point higher than the figure for the previous quarter. In year-on-year terms, domestic demand reduced its contribution to growth in Q4 2019 down to 1.2 pps, 0.6 pps less than in the previous quarter. On the one hand, this lower contribution was due to investment, which fell (–3.5% quarter-on-quarter) following a sharp rise in Q3. On the other hand, consumption remained stable at the levels of the previous quarter. However, given the good outlook for revenue growth (thanks to the strength of employment and the recovery of wages), coupled with the perspectives for the continuation of accommodative financial conditions, consumption is expected to gain traction over the coming quarters. Foreign demand, meanwhile, increased its contribution by 0.5 pps up to 0.6 pps, with a rebound in exports (+1.5% quarter-on-quarter) and a decline in imports (–1.2% quarter-on-quarter). For 2020, we expect the growth of the Spanish economy to continue to gradually decelerate towards levels more in line with its potential. Moreover, as it does so it will continue to correct many of the macroeconomic imbalances it was beset with prior to the financial crisis. In particular, the current account has gone into surplus (1.9% of GDP in November 2019), while household and non-financial corporate debt as a percentage of GDP now lies below the euro area average, and the government has a small primary surplus (although the fiscal deficit exceeds 2% of GDP).

The economic activity indicators suggest there is no let up in the pace of growth. The Purchasing Managers’ Index (PMI) for the services sector increased to 54.9 points in December (53.2 in November). This is the highest it has been in the past nine months and considerably above the threshold that separates expansive and contractionary territory (50 points). On the other hand, the manufacturing sector continues to feel the impact of uncertainties abroad (the PMI for the manufacturing sector has been in contractionary territory for several months now). That said, in November industrial production registered a 2.1% year-on-year growth (corrected for seasonal and calendar effects), an encouraging figure which stands above the average of the past few quarters. In addition, vehicle registrations rose for the third consecutive month in December (+6.6% year-on-year). The business confidence index for Q1 2020, meanwhile, yielded 0.5 points compared to the previous quarter, falling to 130.6 points. This is still a favourable level, albeit somewhat lower than the average for 2019 (132.9 points).

Inflation rises in January to 1.1%. In the absence of the breakdown by component, the increase compared to the 0.8% registered in December appears to reflect the price increases of non-core components (electricity, food and non-alcoholic beverages). In particular, electricity prices have risen in month-on-month terms, in contrast with the 0.3% reduction last year, although in year-on-year terms they remain below the level of January 2019. Thus, headline inflation appears to be closing the gap with core inflation, which remains at around a modest 1%.

The current account surplus recovers to 1.9% of GDP in November, a figure very similar to that of a year earlier, while the deficit in the balance of goods remained at 2.7% of GDP in November (12-month cumulative balance). This stability was possible thanks to the substantial improvement in the trade balance of energy, which offset the deterioration of the non-energy balance. The surplus in the balance of services, meanwhile, remained at 5.4%, propped up by tourism exports (+5.7% of GDP).

Activity in the real estate sector continued to moderate in 2019 in a context of economic slowdown. According to data from the National Statistics Institute, home sales fell by 3.6% year-on-year between January and November 2019. While this is due, in part, to the temporary impact of the implementation of the new mortgage law that came into force last June (sales fell 9.6% year-on-year between July and September), the slowdown is much more pronounced than expected a few months ago. In line with more contained demand, the rise in the price of housing has also slowed down in 2019. The appraisal price of housing rose 3.2% year-on-year in Q2 and Q3 2019, slightly below the 4.4% registered in the first quarter of the year. All in all, the factors supporting housing demand remain strong and there does not appear to be any surplus on the supply side. Furthermore, the slowdown in the growth of the price of housing, more in line with household income, should help the current cycle to be more sustainable. 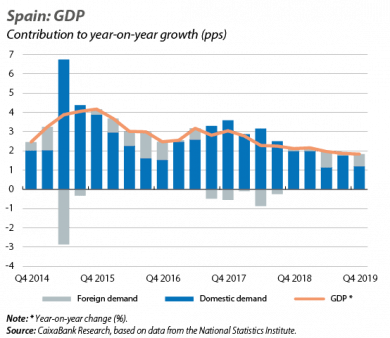 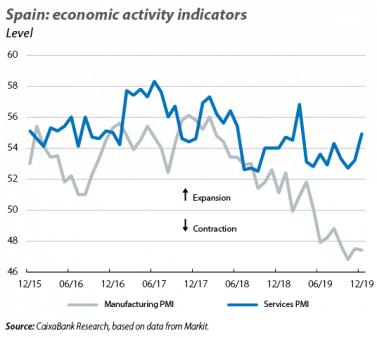 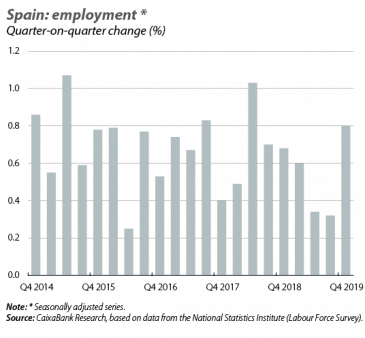 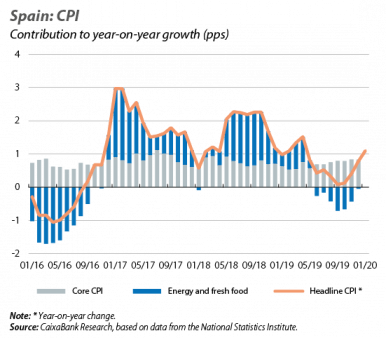 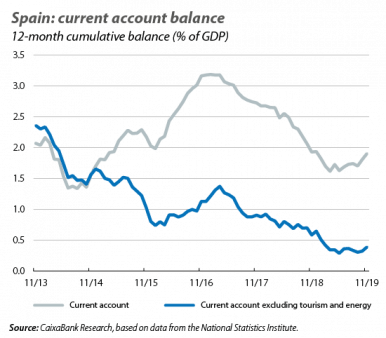 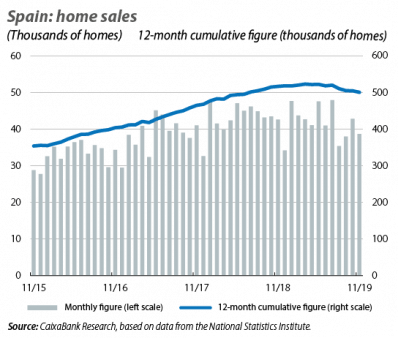