Spain fairs better than the euro area in the current slowdown

The Spanish economy’s GDP grew by 0.5% quarter-on-quarter in Q2 (2.3% year-on-year). Second quarter growth was 1 decimal point lower than that of Q1, but notably higher than that of the main European economies. In the breakdown by component, the biggest surprise was the positive contribution of the foreign sector (especially given the deterioration of the international environment seen in recent quarters). Private consumption, meanwhile, continued its gradual slowdown (0.3% quarter-on-quarter, 1.7% year-on-year), consistent with a scenario in which consumers are moderating their rate of spending following several years in which decisions postponed during the financial crisis finally materialised (fading of the dammed-up consumption effect). On the other hand, investment fell by 0.2% quarter-on-quarter and its year-on-year growth slowed significantly (1.2%, after registering 4.7% in Q1). This weakness was mostly due to the fall in investment in capital goods (–2.6% quarter-on-quarter, –1.5% year-on-year), given that investment in residential construction rose by 1.3% quarter-on-quarter. While this decline may in part reflect a natural moderation following the significant growth of Q1 (7.2% year-on-year), these investment figures are closely linked to the persistent weakness exhibited by the industrial sector and cast some uncertainty over the outlook for aggregate demand which, in general, remains positive.

Foreign demand was higher than expected in Q2. After a modest (and even negative) contribution in previous quarters, in Q2 foreign demand contributed +0.7 pps to year-on-year GDP growth. This improvement was not only supported by the weakness of imports, which grew by 1.0% quarter-on-quarter, but also by the recovery of exports, which increased by 1.8%. This figure was particularly encouraging given the current context of significant global trade tensions and the slowdown in the growth of the euro area. Looking ahead to the coming quarters, however, we expect the deterioration of the international environment to continue to weigh down on the foreign sector and external demand to provide more contained contributions to growth.

The economic activity indicators suggest a gentle slowdown. In July, the PMI services index stood at 52.9 points, following a gently decelerating trend (7 decimal points less than in June and 11 less than in December 2018) but still comfortably within expansive territory (above 50 points). This resilience in services, coupled with encouraging private consumption indicators (retail sales, +3.2% year-on-year in July), demonstrates the sector’s resilience in the face of the slowdown in global manufacturing that is also affecting the indicators for Spain. In particular, the manufacturing PMI shows a more marked slowdown than that of services, and in June and July it fell into clearly contractive territory (47.9 and 48.2 points, respectively). Industrial production, meanwhile, grew by 1.8% year-on-year in June (1.4% in May). While this is not enough to rescue the industrial sector from its current predicament, it does qualify the slowdown. Considering all the economic activity indicators available to date, GDP growth in Q3 should stand at levels similar to those of Q2 (0.5% quarter-on-quarter). However, the reduction of the outlook for the European and global economies set out in this very Monthly Report leads us to lower our forecasts for Spain’s GDP growth by between 0.1 and 0.2 pps (from 2.3% to 2.2% in 2019 and from 1.9% to 1.7% in 2020).

The labour market also indicates moderation. Following a first half of the year with a gentler-than-expected slowdown, the data for July point towards a more marked slowdown in employment, albeit still within a context of relative strength. The number of workers affiliated with Social Security increased by 4,334 between June and July (seasonally adjusted data), a far cry from the Q1 average of 40,253 people and the worst figure since July 2013. Nevertheless, besides the poor figure for July, it should be noted that 490,501 full-time jobs have been created in the last 12 months and that employment grew by 2.6% year-on-year in July (less than the 3.1% registered in December 2018, but by no means a sign of weakness). By sector, the dichotomy between the services sector and industry continues. On the one hand, affiliation in the services sector grew by 2.8% year-on-year (+409,842 people), a vigorous pace of growth similar to that of previous months (+2.9% year-on-year in June). On the other hand, affiliation in industry registered growth of 1.3% year-on-year (+29,425 people), while that of construction saw a moderation in its growth rate down to 4.7% year-on-year (+58,145 people), a healthy rate albeit somewhat lower than that of the previous month (5.2%).

The overall deficit of the general government stood at 1.4% of GDP in May. In aggregate terms, the data reflect a situation similar to that of last year, except that the increase in social contributions (8.8% year-on-year), which boosted the improvement in the Social Security surplus, was offset by a deterioration in the government accounts, with expenditure rising by 4.7% year-on-year up to May despite the reduction in interest payments.

Inflation remains low. In August, headline inflation fell to 0.3% (0.5% in July), accentuating the tone of moderation seen in recent months. Although we do not yet know the breakdown by component as of the date of this report, the lower inflation is most likely due to non-core components, particularly electricity (prices of which registered a cumulative decline of 7.1% year-on-year in July).

The deterioration of the foreign sector is put on hold. In June, the current account balance registered a surplus of 0.7% of GDP (cumulative 12-month balance), which represents a deterioration of 0.9 pps of GDP compared to the same period last year. While there can be no talk of a recovery and export growth remains modest (1.6% year-on-year versus 2.0% in December 2018), what is clear is that the declining trend that had dominated since early 2017 (and which had intensified since mid-2018) has been put on hold. In services, meanwhile, we see a gentle slowdown in tourism coexisting with a more marked slowdown in exports of non-tourist services. In this context, 8.8 million international tourists entered the country in June, 3.2% more than in 2018, and they spent 3.5% more thanks to an increase in daily expenditure per person. 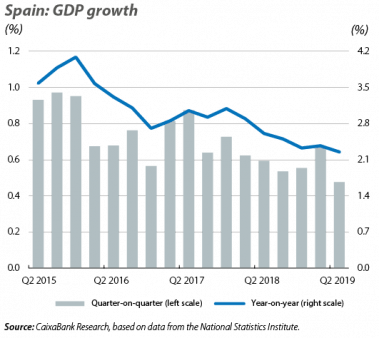 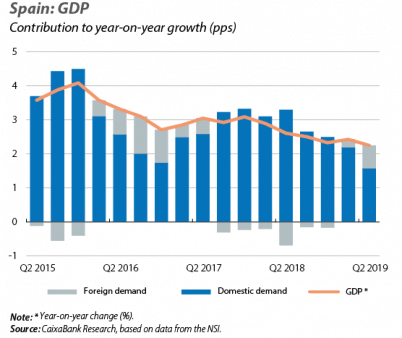 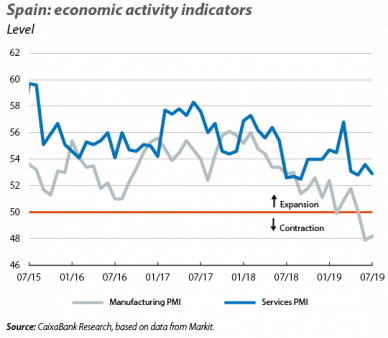 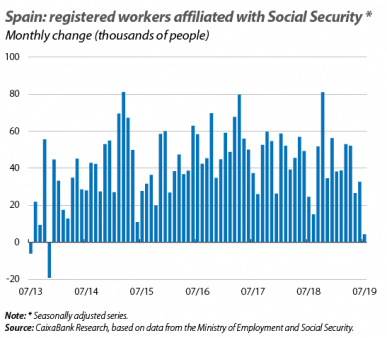 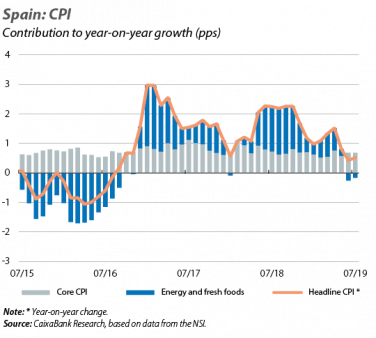