Spain: slight moderation of growth, in anticipation of the coronavirus

An orderly slowdown pending new developments. The Spanish economy ended 2019 giving continuity to a gradual and expected slowdown (annual GDP for 2019 of +2.0%, following the 2.4% of 2018), with growth rates significantly higher than in other major euro area economies (Germany +0.6%, France +1.2% and Italy +0.2%). In 2020, the reduced push from cyclical factors and the modest growth of the country’s main trading partners (especially in the euro area) will give continuity to this slowdown. However, the emergence of the COVID-19 coronavirus and its spread to a number of OECD countries could erode economic activity indicators over the coming months. The impact of the coronavirus can be seen in lower trade flows, not only with China but also with other trading partners that have been affected by the COVID-19 outbreak. Furthermore, a context once again marked by uncertainty could hinder domestic demand. That said, the impact of the coronavirus is expected to be limited to a relatively short period. Therefore, after the temporary blip in the economic activity indicators, we can expect a rebound effect in growth in the quarters that follow. In addition, in this demanding global environment, the Spanish economy will continue to enjoy the benefit of having corrected many of the imbalances it suffered prior to the last financial crisis, as well as the continuity of accommodative financial conditions that are well supported by the ECB’s monetary policy.

The latest indicators suggest slightly slower growth, but could be dampened by the coronavirus. In particular, in January, the services PMI index stood at 52.3 points. This is comfortably above the 50-point threshold (which separates expansive from recessive territory), but it is also the lowest figure of the past six years. In contrast, the counterpart indicator for the industrial sector rose 0.9 points, although in this case the figure remains below 50 points (48.5). The growth of turnover in the industrial sector, meanwhile, returned to positive territory in December 2019 (+0.1% year-on-year, based on the three-month moving average) with a 1.5-pp rebound compared to November, following five consecutive months of negative growth. In addition, the counterpart indicator of the services sector registered a lower rate of deceleration, growing by 3.2% year-on-year (three-month moving average). However, indicators that capture the change of sentiment described in the previous pages of this Monthly Report and resulting from the outbreak of the coronavirus medical emergency in multiple economies are not yet available.

The labour market began the year with modest performance. For seasonal reasons, January is traditionally a bad month for labour market data as it marks the end of the Christmas campaign. In this regard, the decline in Social Security affiliation (–244,044 people in seasonally adjusted terms) was not unusual. However, in seasonally adjusted terms, the number of registered workers rose by just 5,324 people in January, well below the increase observed in January 2019 and 2018 (+42,415 and +58,487 people, respectively). This reflects the continuity of the gradual moderation in the pace of job creation (1.8% year-on-year in January, following 2.0% in December and 2.6% on average in 2019). Furthermore, the slowdown is occurring across all sectors: there was a moderation in the growth rate of registered workers affiliated with Social Security in the construction sector (2.3% year-on-year), in industry (0.9%) and in services (2.4%). The rate of decline in registered unemployment, meanwhile, fell to 1.0% year-on-year in January (–1.3% in December). This could, in part, be due to the increase in the overall labour force (as we explained last month, the labour force grew by 1.3% year-on-year in Q4 2019).

The government relaxes the deficit targets. Pending the publication of the figure for the year end, all the indicators suggest that Spain will have ended 2019 with a budget deficit of –2.3%. For the next few years, the government has proposed raising the fiscal deficit target in 2020 from –1.1% of GDP to –1.8% and, for 2021, from –0.4% to –1.5%. These figures are more in line with our existing projections here at CaixaBank Research, but they imply a slowdown in the reduction of public debt, which remains very high (estimated to be slightly above 95% in 2019). Thus, the new targets maintain a commitment to reducing the deficit, but at a much more gradual rate.

The foreign sector ends 2019 with a good tone. The current account balance stood at +1.9% of GDP in 2019 (23,943 million euros), a similar figure to that of 2018 but with a different composition. In particular, 2019 saw a 0.4-pp improvement in the deficit in the balance of energy goods, which was offset by the greater deficit of non-energy goods (–0.1 pp) and the lower surplus in the balance of services (–0.2 pps). Delving into the detail, the energy deficit benefited from a lower oil price, while the deterioration of the deficit in non-energy goods was driven by the slowdown in exports. The surplus in services, meanwhile, deteriorated due to the effect of imports, including both tourism imports (Spanish tourists travelling abroad) and non-tourism imports. Finally, the income balance had a minimal negative contribution.

Activity in the real estate sector ends the year with a more moderate performance. Sales of residential housing fell by 3.3% in 2019 as a whole, affected by the negative impact of the introduction of the real estate credit act (known as the LCI) in June. That said, the figure for December began to show a slight rebound following the effects of this act. The price of housing according to appraisals, meanwhile, regained some momentum in Q4 2019 (+0.9% quarter-on-quarter, after a modest 0.1% quarter-on-quarter growth in both Q2 and Q3). With this figure, in 2019 as a whole the price of housing grew by 3.2%, slightly below the figure for the previous year (3.4% in 2018). The indicators thus reflect a slowdown, in line with the slower pace of growth of the economy. However, this should not be interpreted as a sign of weakness in the sector, but rather as a normalisation towards more sustainable growth rates following the significant rebound experienced during the recovery. 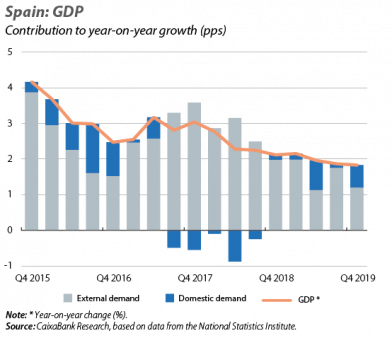 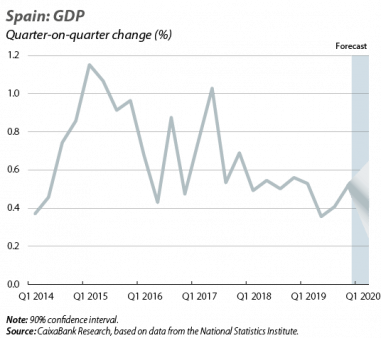 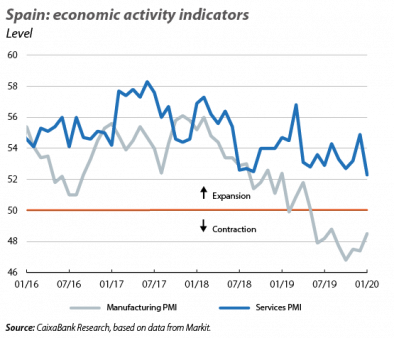 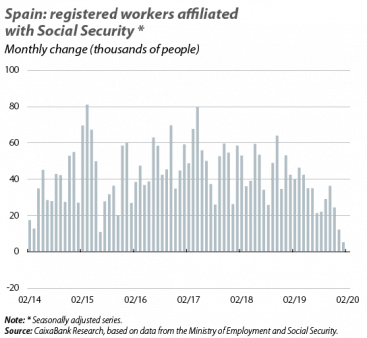 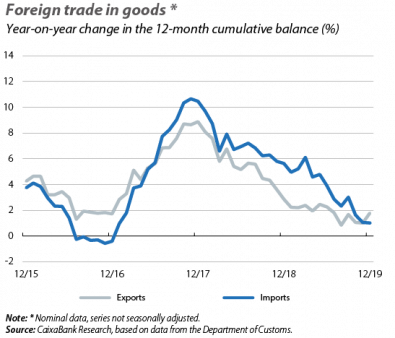 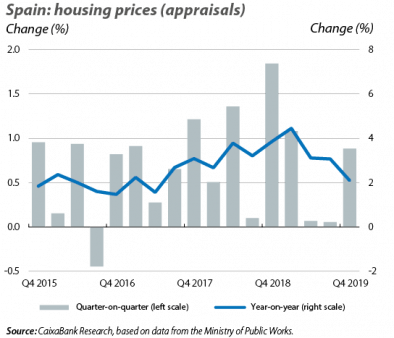