The Spanish economy in 2017: growing with fewer tailwinds

The Spanish economy’s growth was very strong in the two-year period of 2015-2016: more than 3% both years and outperforming the forecasts of most analysts. This extraordinary achievement is due to the convergence of temporary support factors, both external (low oil prices and the ECB’s incredibly accommodative monetary policy) and also internal (fiscal impulse) in addition to the economy’s cyclical recovery. In the second half of 2016 these tailwinds started to abate, reflected in the slight slowdown in the rate of GDP growth. With a view to 2017, the trend in these support factors will largely determine the rate at which the Spanish economy will advance next year.

Let us begin by going back a little in time, to when a barrel of crude oil cost around 100 dollars, one euro was worth 1.33 dollars and the yield on Spanish 10-year bonds was 2.7%. Although these figures may seem very far from the current economic situation1 they come from the averages for 2014, just two years ago. GDP growth that year was 1.4%, a little above the growth rate for trend GDP,2 thanks especially to the lower financing costs the Spanish economy was starting to benefit from after the ECB’s expansionary measures and, to a lesser degree, to the slight reduction in the price of oil (see the first graph). These support factors intensified in 2015: oil prices slumped to 35 dollars in December and financing costs continued to fall as the ECB intervened more decisively, eventually beginning its sovereign bond purchases. This slump in oil prices and interest rates continued in 2016 but the drop was less than in the previous year and, consequently, also its impact on growth. On the whole these two factors, oil and interest rates, explain about 1 pp of the GDP growth in 2015 and 0.5 pps in 2016.3 CaixaBank Research forecasts predict a moderate increase in both oil prices and interest rates in 2017, so these factors are likely to stop supporting GDP growth next year.

Another external element that has boosted the Spanish economy is the exchange rate. The ECB’s expansionary monetary policy, together with the start of monetary normalisation in the US, resulted in the euro depreciating sharply, falling to an average of 1.11 dollars in 2015. Compared with a larger basket of currencies, it can be seen that the fall in the real effective exchange rate for Spain compared with its main trading partners started in 2014 (–2.9%) and continued in 2015 (–2.8%) and 2016 (–1.0% between January and October, the latest figure available). Given that the exchange rate’s impact on the trend in exports is not immediate but its maximum effect tends to be felt after approximately one and a half years, we estimate that the effect on GDP growth in 2015 was relatively small, in the order of 0.2 pps.4 However, the impact in 2016 is more substantial (around 0.5 pps) and will still be very significant in 2017.

Lastly, on the internal front, another factor that has provided a considerable boost to GDP growth over the last two years has been expansionary fiscal policy. In 2015 the public deficit fell by 0.8 pps to 5.0% of GDP (not including losses due to bank bail-outs). The fiscal adjustment in 2016, if the new target of 4.6% of GDP is met, will have been less, namely 0.4 pps. In both years the improvement in the macroeconomic environment would have brought about a larger reduction in the deficit had fiscal policy been neutral; in other words, the reduction in the deficit was less in relative terms because expansionary fiscal measures were taken, such as cutting income tax. Specifically, we estimate that this fiscal impulse contributed 0.5 and 0.6 pps to GDP growth in each of the two years in question. With a view to 2017, if the deficit falls at a slightly higher rate than in the last two years and comes close to the target agreed with Brussels, fiscal policy would be almost neutral.

The impact of the aforementioned shocks has not affected the different GDP components equally but it has certainly been widespread. As can be seen in the second graph, investment is the component benefitting the most from the different temporary support factors although private consumption and public consumption have also been helped by these factors. Regarding the foreign sector, the euro’s depreciation has boosted growth in exports by 3 pps, accounting for almost one third of the cumulative increase in the period 2015-2016.

In summary, a detailed analysis of the main temporary support factors suggests that these lie behind approximately half the exceptional growth observed in the Spanish economy in the two-year period of 2015-2016. Without any doubt these elements helped to regain confidence in the economy’s growth capacity and thereby to consolidate its good momentum. Without them, growth would have been smaller and the confidence effect, which is more difficult to quantify, would also have been weaker.

As has already been mentioned, CaixaBank Research forecasts for 2017 suggest these tailwinds will stop blowing and that some may even become headwinds. In such a scenario, the Spanish economy’s growth rate will slow down to a still notable 2.6%. However, the uncertainty surrounding this forecast is high as it depends on variables such as oil prices, interest rates and the exchange rate, whose trends are very unclear given the current international context. To illustrate this uncertainty, all we need to do is to look at the huge difference between the most optimistic and the most pessimistic forecasts provided by various analysts. For example, the forecast for the average oil price next year ranges from 41 to 60 dollars while the yield on Spain’s 10-year bond ranges from 1.0% to 2.2%. In spite of this broad range of forecasts, the estimated impact on GDP growth is relatively modest (between –0.2 and +0.1 pps). It is also important to note that, in both cases, CaixaBank Research forecasts are on the more conservative side, which means that the risks would be upwards (see the third and fourth graph). Lastly, we must also point out that the opinions regarding the course that will be taken by Spain’s public deficit in 2017 diverge substantially: this figure ranged from –3.1% to –4.0% of GDP in November’s Funcas think tank. In this case the direct impact on GDP growth is considerable, illustrating the importance of credible measures being developed.

In summary, although the bulk of the evidence available suggests that growth will still be strong in 2017, uncertainty will also remain high, particularly due to the complex international situation. Given this environment, in which the economy’s tailwinds may stop supporting the country’s growth, it is vital to continue promoting an ambitious agenda of structural reforms that guarantees sustained and balanced growth in the medium term.

2. Trend GDP is calculated based on an estimated autoregressive model for the period 1995-2013. This estimates the growth in GDP that would have occurred without any shocks.

4. The impact of the real effective exchange rate on GDP is estimated based on the historical elasticity of exports and the exchange rate. 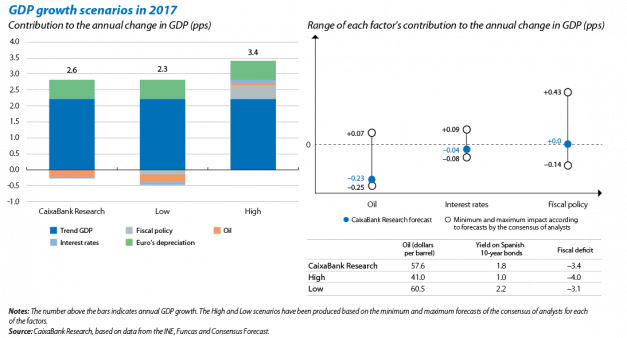