The Spanish economy in 2020: things are not looking so bad

The end of the year is drawing near, and with it comes our usual exercise of reviewing the outlook for the economy over the next year. As we shall see, we anticipate that growth will moderate in 2020, but this moderation will be nothing else than a transition towards a phase of more gentle growth following a long cycle of economic recovery.

In the past six years, the Spanish economy has gone through a spell of strong economic growth which has enabled it to recover – and, in the case of some indicators, exceed – the levels of economic activity seen prior to the financial crisis.1 However, as early as in 2018 the economic recovery began to lose some steam and this trend has continued throughout 2019. GDP growth went from 2.9% in 2017 to 2.4% in 2018 and a variety of indicators suggest that the economy will end 2019 with growth of around 1.9%-2.0%. This moderation has materialised through two channels: the smaller boost from the foreign sector and the moderation in household spending. Let us look briefly at each of these channels, since they will prove useful for helping us to understand the outlook for 2020.

The key factors for 2020: the foreign sector and consumption

With regard to the foreign sector, in the first chart we show the year-on-year growth of Spanish exports and its breakdown between foreign demand2 and a residual term.3

At first glance, we see how the slowdown in foreign demand explains much of the slowdown in export growth. What factors lie behind this decline in foreign demand? There are at least two such factors: firstly, in March 2018, the trade tensions between the US and China began to escalate, and secondly, 2018 also marked the beginning of a gradual slowdown of growth in the euro area.4

The second factor that has contributed to the slowdown in the growth rate has been the moderation in private consumption: whereas in 2017 consumption was growing at a rate of 3.0% per annum, the latest forecasts (which incorporate data for the first three quarters of the year) place growth for 2019 at 1.2% per annum. While the slowdown was initially caused by a lower contribution from non-durable goods in its first phase (between Q4 2017 and Q3 2018),5 in recent quarters the moderation of growth in consumption has been driven by durable goods, which are currently generating a negative contribution. This is likely to be due to a slowdown in household spending on vehicles:6 faced with an increase in regulatory uncertainty and the challenge of technological change (the replacement of combustion by electric engines), consumers may have chosen to postpone their spending plans until these unknowns have cleared.7 If this is the case, spending on vehicles could experience a rebound effect as these unknowns dissipate, due to the pent-up demand that is currently accumulating.

So, what can we expect for 2020? All the indicators suggest that next year will be defined by the same key elements. As we can see in the first chart, to the extent that global growth, and that of the euro area in particular, remains contained, we do not expect to see a significant surge in exports. Therefore, the foreign sector will continue to provide very modest contributions to growth. Moreover, the global environment will remain a source of risk. Brexit, the trade negotiations between the US and China, and the difficulties experienced by the automotive sector at the European level are factors that are still far from being resolved.

Furthermore, we anticipate a moderation in the growth rate of domestic demand, though it will remain the main driver of the economy. Household incomes will continue to grow at notable rates,8 thanks to the rise in wage growth, which will offset the slowdown in job growth. This growth in incomes will allow consumption to rise slightly above the figures for 2019. All in all, as can be seen in the second chart, this upswing will be limited and we anticipate that households will continue to rebuild their savings buffers in response to a somewhat more modest macroeconomic outlook. While this increase in savings will weigh down on the economy’s growth rate in the short term, it will give it greater resilience for the future. Finally, we anticipate that investment will continue to grow thanks to the reasonably good prospects for domestic demand and the accommodative financial environment, albeit at more moderate rates due to the difficulties of the manufacturing sector.9

Taking all the factors set out above into account, we anticipate that the economy will grow by 1.5% in 2020, a modest rate compared to the average growth rate of 2.7% between 2014 and 2018, but higher than the growth forecast for the euro area (around 1.0%).

Will there be a recession?

Over these past few months, a climate of concern has formed among public opinion over the possibility that a new recession could grip the Spanish economy in the coming quarters.10 In view of this, it is worth reflecting on whether this concern is justified.

In order to shed some light on this dilemma, we use a macroeconomic model that we have developed here at CaixaBank Research.11 The third chart shows the evolution of GDP growth that we expect to see up until Q4 2020, as well as the deviations from our forecasts that we could see if shocks that alter the expected growth trajectory occur. We estimate that the probability of a negative shock materialising in 2020 that is significant enough to plunge the Spanish economy into a new recession is 15%.12,13 This probability, together with the trend of GDP we expect for 2020 with a growth of 1.5%, tells us that Spain is in a period of deceleration consistent with a more mature phase of the expansionary cycle and with a low risk of recession, which should reassure us a little. As is sometimes said: things are not looking so bad, after all!

2. Built as a weighted average of the imports from Spain’s main trading partners.

3. This component includes everything not captured by the foreign demand component. This may include changes in the relative competitiveness of Spanish exports compared to its main competitors.

5. We analysed the causes of this behaviour in the article «Quo Vadis, consumption?» from the MR11/2019.

6. One indicator that suggests this possibility is that of vehicle registrations, which in year-on-year terms have fallen by an average of 7.0% between October 2018 and July 2019.

7. The regulatory uncertainty is due to both doubts surrounding the mix of taxes that governments will impose on vehicles and possible restrictions on the movement of combustion-engine vehicles.

9. The sector is feeling the impact of greater protectionism at the international level, the decline in foreign demand and the idiosyncratic difficulties being experienced by the automotive sector itself.

10. Proof of this is the fact that the word «recession» is currently as popular in Google searches as it was during the euro crisis.

11. This is a general equilibrium semi-structural model of the Spanish economy, where the short term is determined by aggregate demand while, in the long term, aggregate supply and demand are equal.

12. Probability of there being at least two consecutive quarters with negative quarter-on-quarter growth between Q4 2019 and Q4 2020.

13. A probability of 15% implies an event that occurs, on average, once in every 7 years. In this regard, it is more similar to an episode like the dotcom crisis (between 2000 and 2002), which caused a marked slowdown in the US economy but had a moderate global impact, than it is to an episode like the financial crisis, which has a much lower probability of occurence (less than 5%). 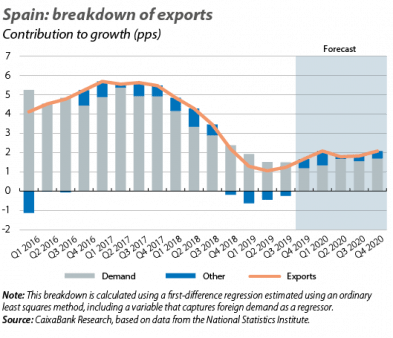 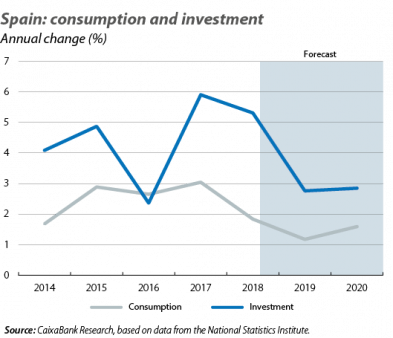 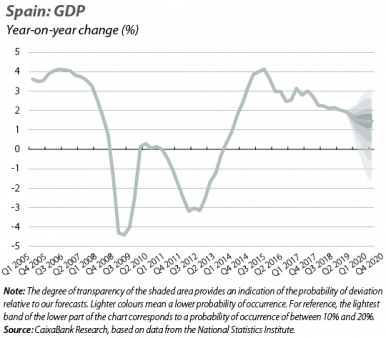