Global outlook: the momentum remains strong. With Q1 now over, the available indicators suggest that this period will have closed with growth as high as around 4%, somewhat above that registered in the second half of 2017. As has been pointed out earlier in these pages, a hallmark of the current cyclical phase is the high degree of synchronisation, such that both advanced and emerging economies are accelerating. The latter are showing higher rates of economic growth, as would be expected, with growth of around the 5% mark in Q1. Despite some qualitative indicators tilting downwards towards the end of the quarter (a possible reflection of the deterioration in the balance of risks, which we will return at in a moment), the global economy is expected to end up recording similar growth figures in 2018 to those of 2017, since the global drivers remain in place. This is a similar diagnosis to the one recently published by the IMF.

Nevertheless, the balance of risks remains biased towards an eventual reduction in growth. Despite the good start to the year, the outlook is not free of risks. In the macro-financial field, two risks are particularly significant: the growing level of global debt and the sensitivity of the financial markets (and of certain emerging markets) to a potential greater-than-expected tightening of the international financial conditions. The pockets of political uncertainty also remain a threat (protectionism, populism and geopolitical risks). In this category, perhaps the most notorious risk is the first one, that of a possible protectionist shift. As is well known, the US decision to apply tariffs on various imported products, and the likely response from China, have increased fears of an escalation of trade tensions. However, we must not forget that there are grounds for the US complaints, as China’s trade practices do not conform to the standards of free trade applied by most countries. Therefore, even if it involves disruptive methods which generate instability in the short term, this course of action might end up leading the international trading system to function better in the medium term.

GDP grew at a solid 0.6% quarter-on-quarter in Q1 2018. Although this is a slightly lower rate of growth than the previous quarter (0.6% quarter-on-quarter compared to 0.7% in Q4 2017) it has been a positive surprise. In year-on-year terms, the increase was 2.9%. By components of demand, the slight deceleration of growth was largely down to the slowdown in the rise of private consumption, public consumption and investment in housing. This, however, was partially offset by the positive contribution of the stock component, the slower growth in imports and the strength of non-housing investment. This slight slowdown in the economy is not a surprise, as some economic indicators had already shown signs of losing momentum at the end of the quarter, as has also happened at the global level. In addition to this is the idiosyncratic factor of the US national accounts. As acknowledged by the country’s Bureau of Economic Analysis (BEA), there is a seasonality problem in the GDP trend line which causes it to be repeatedly lower in Q1 and higher in the following two quarters.

The slight slowdown in Q1 does not change the underlying dynamics. Despite the slowdown in growth in Q1, these atypical effects are expected to no longer apply in the following quarters. In particular, CaixaBank Research expects growth to accelerate in the remainder of this year, thanks to the combination of fiscal expansion, monetary conditions which remain accommodative despite the gradual increase
in the reference rate by the Fed, and the strength of domestic demand, which will continue to be supported by a favourable labour market.

A labour market typical of mature phases. In this regard, it is worth recalling that despite the fact that only 103,000 jobs were created in March, which was fewer than expected, this figure is logical in view of the very high figure for the previous month (326,000 jobs). The figure for Q1 as a whole, however, shows more consistency than the high volatility of the monthly figures: over 600,000 jobs were created during the quarter, slightly below the figure for Q4 2017 (660,000). In addition, the unemployment rate stood at just 4.1% in March, while wages rose by 2.7% year-on-year. Finally, it should be noted that the rate of economic activity was maintained without any excessive changes during Q1 (60.3%, similar to that of 2017 as a whole).

Consumer prices, on the verge of entering an upward phase. Inflation rose by 2 decimal points in March to 2.4% year-on-year. Similarly, core inflation (which does not include energy and food prices, usually subject to greater volatility) stood at 2.1%, 3 decimal points higher than in February. Despite the slowdown in the CPI on a month-on-month basis, due to the sharp drop in the energy component, both headline and core inflation stood above the figures for the past few months. This trend can be expected to continue as there is going to be a significant rise, given that last year’s sharp fall in wireless telephony prices which occurred during these months will not be repeated this year. In this context, the minutes of the Fed showed greater confidence in the outlook for growth and inflation, which affirms the four interest rate rises predicted by CaixaBank Research for 2018.

Capital inflows fall slightly, but remain high. The underlying trend of the flow of capital (equities and debt) into the emerging economies is one of deceleration. However, the current pace of inflows is by no means low, particularly if we take into account the fact that these economies are especially sensitive to the current environment, with a gradual tightening of global financial conditions (see the Focus «Growth in the emerging economies and global financial conditions: a close relationship» in this very Monthly Report) and the ever-present geopolitical and political uncertainty. In line with its high growth, emerging Asia remains the major receiver of financial capital.

China, undergoing a slight deceleration. In China, growth in Q1 was relatively high: GDP grew by a considerable 6.8% year-on-year, the same rate as in the previous two quarters. This progress was supported by temporary factors, such as greater levels of industrial activity (the low temperatures in January and February stimulated energy demand and reduced pollution levels, which in turn momentarily reduced the government’s regulatory pressure in its anti-pollution campaign) and a rebound in investment in housing. The economic data for March, which was published at the same time as GDP for Q1, showed a positive tone in line with the figure for growth. Industrial production rose by a considerable 6.0% year-on-year and retail sales grew by an impressive 10.1%. All in all, these short-term dynamics do not change the diagnosis that China will move into a phase of lower growth in 2018 due to the gradual withdrawal of economic stimuli.

Good growth in many emerging economies. The rest of the main emerging markets are registering reasonably positive growth. Although each of these economies is subject to factors that both support and restrict growth, most of them are benefiting from the combination of global financing, which is still cheap and widely available, the synchronised acceleration of global growth and the upward trend in raw materials. In this context, it is perhaps the major emerging countries in Asia that are making the most of these positive factors, since they have comfortably achieved high levels of growth (year-on-year growth rates close to 6%). Others, however, continue to see their growth hampered by uncertainty, mainly of a political and geopolitical nature, such as in the case of Russia and Mexico. In Russia’s case, in the fourth quarter of 2017, GDP grew by 0.9% year-on-year, lower than expected and also lower than the 2.2% recorded in the previous quarter, bringing growth for 2017 as a whole to 1.5%. This weak end to the year, together with the imposition of new international sanctions, reaffirms the forecast for moderate growth in 2018 (2.0%). Mexico, meanwhile, grew by 1.2% according to the initial data for the quarter (compared to 1.5% in Q4 2017), well below the economy’s growth potential as a result of the political uncertainty (NAFTA negotiations and the presidential elections). 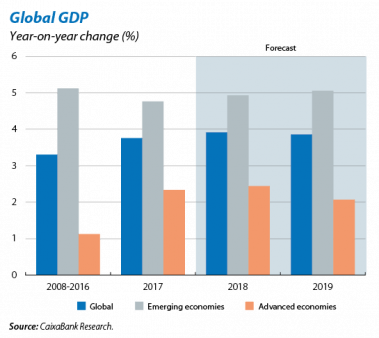 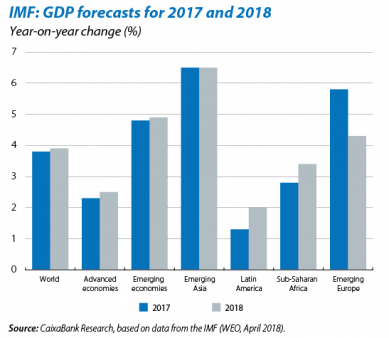 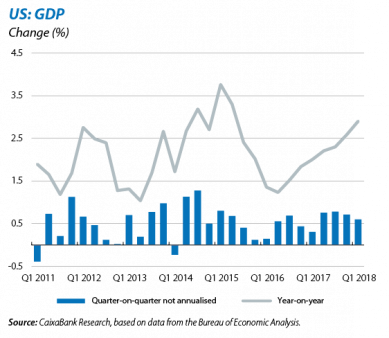 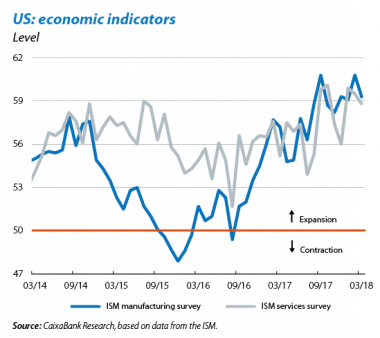 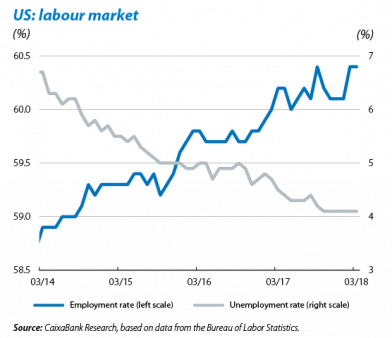 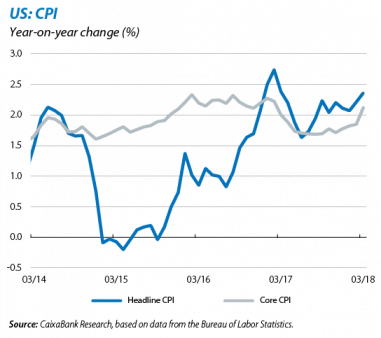 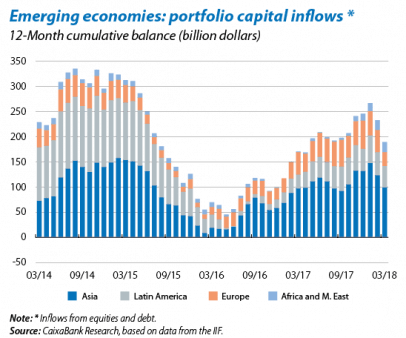 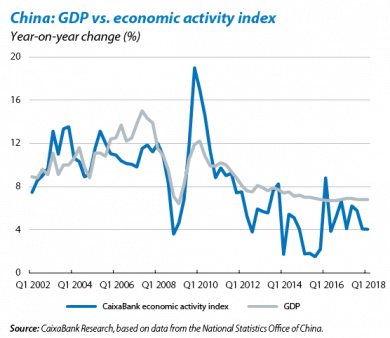 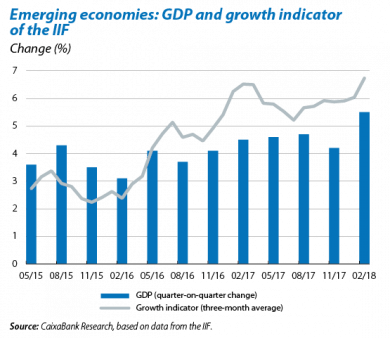