Growth moderates in the second half of 2019. This is reflected in indicators such as the global composite Purchasing Managers’ Index (PMI), which has been in decline for the past few months and stood at a rather modest level in September (51.2 points). This is largely due to the weakening of global trade and the widespread cooling of the manufacturing sector (the manufacturing PMI index remains below the 50-point threshold that separates expansive and contractionary territory). However, the services sector remains resilient (the services PMI index remains well above the 50-point threshold), at least for now, which mitigates the slowdown in economic activity growth. This less buoyant environment is also reflected in the latest update of the IMF’s macroeconomic projections, in which the institution once again reduced its growth forecasts for the global economy in 2019 (from the 3.2% published in July down to 3.0%), for both advanced and emerging economies, and maintained the balance of risks skewed to the downside. The IMF’s downward revision largely reflects the negative impact of the protectionist measures implemented by the US and China to date, as well as the indirect negative consequences of the trade tensions between the two countries. Despite this revision, the IMF expects a slight upturn in global growth in 2020 up to 3.4% (reasonably in line with CaixaBank Research’s forecast of 3.2%), supported by the improvement in economic activity in several emerging economies.

The trade tensions remain the primary source of risk for the global economy. On the one hand, the US and China announced an agreement (as part of a first phase of negotiations), which suspended the tariff increase on Chinese imports due to be introduced on 15 October, although the details of the deal are yet to be defined. However, despite this agreement and both parties’ intention to continue the negotiations in a second phase, uncertainty will continue to weigh down on economic growth over the coming quarters (given that the negotiations have waned on more than one occasion in recent quarters, and business and consumer confidence will be restored only very gradually). On the other hand, the trade tensions between the US and the EU escalated after the World Trade Organization (WTO) ruled that the EU had given illegal aid to Airbus and, as compensation, authorized the US to introduce tariffs valued at 7.5 billion euros on a range of European products (mostly agri-food products). Despite the possibility for these tariffs to be removed at any time, their introduction (effective from 18 October) could contribute to the deterioration of economic sentiment.

In Europe, the Brexit saga continues to drag on. In particular, the British prime minister Boris Johnson and the EU reached a new agreement for the United Kingdom’s withdrawal. However, the House of Commons suspended the ratification of this agreement, insisting on the necessary legislation to make it effective being approved first. Furthermore, since no agreement was ratified by 19 October, Johnson was forced by law to ask the EU for a new Brexit extension (the third such extension), this time until the end of January 2020, albeit with the option to leave earlier if the withdrawal agreement is ratified in the coming weeks. Although this extension allays fears of a disorderly Brexit in the short term, a no deal withdrawal further down the line cannot be entirely ruled out. For instance, this could occur if the pro-Brexit parties were to win sufficient support in the forthcoming general election (which has been called early, on 12 December) so as to put the option of a hard Brexit back on the table.

Meanwhile, economic activity in the euro area holds steady. In particular, GDP growth for the euro area remained stable at 0.2% quarter-on-quarter (1.1% year-on-year) in Q3 2019, slightly above our forecasts and analysts’ consensus (0.1% quarter-on-quarter). All in all, growth remains at modest levels. This is particularly due to the weakness of industry and the foreign sector (both penalised by the slowdown in the global economy and the environment of global uncertainty brought about by the trade tensions between the US and China and the unknowns surrounding Brexit, among other factors), in addition to other idiosyncratic restrictions such as the sectoral shock in the automotive industry. All these elements are affecting Germany the most, a country for which the Q3 GDP figure has not been published yet. Among the countries for which we do have data, France performed particularly well, with growth remaining at 0.3% quarter-on-quarter in Q3 (1.3% year-on-year), as did Spain (0.4% quarter-on-quarter). In contrast, the Italian economy continued to muddle through (with growth of 0.1% quarter-on-quarter and 0.3% year-on-year).

Domestic demand continues to support economic activity in the euro area. In particular, consumers continue to benefit from a highly accommodative monetary policy stance and a healthy labour market. This is a labour market that continues to generate jobs (+1.4 million in the last year, according to data from the labour force survey for Q2 2019, reaching 147 million people in work and exceeding the peak of 2008 by almost 3 million), while the unemployment rate is at its lowest in the past 11 years (7.5% in September). In addition, the buoyancy of the labour market is gradually translating into wage growth (which reached 2.2% year-on-year in Q2 2019). In this context, consumption indicators such as retail sales continue to perform well (+2.1% year-on-year in August). However, some demand-side sentiment indicators have also begun to decline (the consumer confidence indicator developed by the European Commission fell in October down to –7.6 points, its lowest level since the beginning of 2017).

The US economy remains strong. In Q3, GDP grew by 0.5% quarter-on-quarter (1.9% in annualised quarter-on-quarter terms) and by 2.0% year-on-year. This is a rate similar to that observed in Q2 2019 and slightly above CaixaBank Research’s forecasts and analysts’ consensus. This is a solid growth rate, especially given the context of trade tensions surrounding the North American country for the past few months and the protectionist measures already in place. All in all, over the coming quarters US growth is expected to gradually moderate, partly because of the restriction of the trade conflict but also due to the inherent maturity of the business cycle. In this regard, some of the economic activity indicators published in recent months, such as the ISM manufacturing and services sentiment indicators, have registered a substantial decline (47.8 and 52.6 points in September, respectively, levels not seen since 2016). On the other hand, potential fiscal stimulus measures in 2020 (especially in the field of infrastructure) and the accommodative monetary policy of the Fed could act as a counterweight and mitigate the slowdown in growth.

Despite the impact of the trade conflict on investment, the tone of the labour market and consumption remains upbeat. On the one hand, business investment contracted again for the second consecutive quarter in Q3 (–0.8% quarter-on-quarter), weighed down by the decline in capital goods. On the other hand, 136,000 jobs were created in September, a particularly high figure for an economy that has been in full employment since 2018. The unemployment rate, meanwhile, fell to 3.5%, its lowest level since December 1969, and wages rose by 2.9% year-on-year. Thus, the positive dynamics of the labour market continue to support private consumption (which grew by 0.7% quarter-on-quarter in Q3), a key component of growth and one with high inertia.

No signs of inflationary pressures. In September, headline inflation remained stable at 1.7%. On the other hand, core inflation, which is more closely correlated to fluctuations in economic activity, stood at higher levels (2.4%) but with no signs of upward pressure. In this context, the absence of pressures on prices and the presence of pockets of uncertainty led the Fed to cut interest rates once again (for the third time this year), this time by 25 bps down to the 1.50%-1.75% target range (but remaining cautious with regard to future cuts).

In China, the slowdown of the economy continues. In particular, China’s GDP grew by 6.0% in Q3 2019, which represents a slowdown of 2 decimal points compared to the figure for Q2 and the lowest growth since the country began to publish quarterly GDP data (in 1993). This slowdown partly reflects China’s structural transition towards a more tertiary economy, which entails lower growth rates. However, part of the slowdown seen in recent quarters is also caused by the reduced buoyancy of the industrial sector and the high uncertainty associated with the trade war with the US, which has penalised Chinese exports. Over the coming quarters, we expect the Chinese economy to continue to slow down gradually. However, the authorities still have scope to further stimulate the economy, especially through monetary policy, and thus to avoid a sudden slowdown. 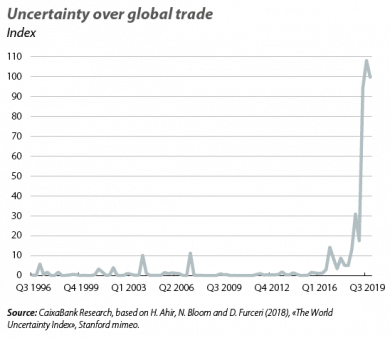 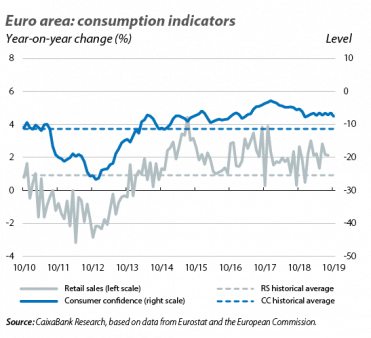 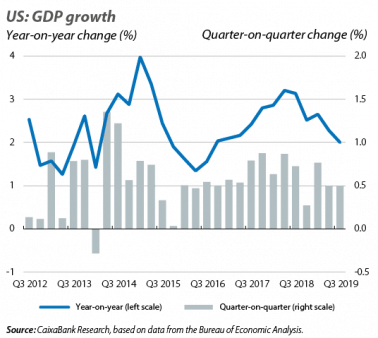 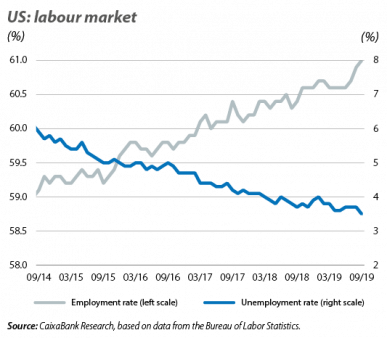 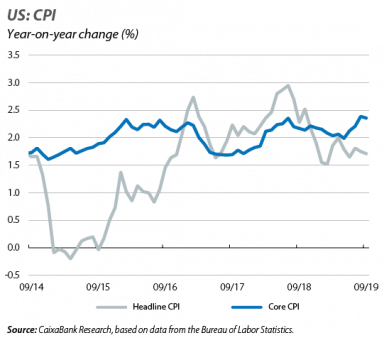