The United States and China lead the recovery

The IMF has slightly lowered its forecasts for world growth. In its autumn World Economic Outlook, the international organisation predicts 3.3% growth for the world's economy in 2014 and 3.8% in 2015, 0.1 and 0.2 pps below its July forecasts, respectively. In spite of this downward revision, the IMF still predicts a scenario of gradual acceleration and its slight alteration is due to deteriorating prospects for the euro area, Japan and Brazil. Neither the improved outlook for the United States and Japan nor the still significant GDP growth predicted for China is enough to offset this downturn. The IMF also highlighted the increasing disparity between countries and warned that downside risks had intensified, such as the threat of deflation in the euro area, geopolitical tensions, the repercussions of possible financial excesses and the effects of monetary normalisation in the US.

Strong Q3 GDP supported the IMF's forecasts for the country. GDP grew by a considerable 0.9% quarter-on-quarter (2.3% year-on-year) and, although this might seem like a slowdown compared with Q2 (1.1% quarter-on-quarter), we should note that a large part of the strong spring was simply due to a rebound effect after the drop in GDP in Q1 (in turn caused by winter storms). The summer's good figure is no longer a rebound but indicates that the US economy is approaching cruising speed. Expansion is in line with our scenario and we have therefore maintained our forecast of 2.2% growth for 2014. Nonetheless it should be noted that private consumption and investment, in spite of still being key elements for growth, have slowed down compared with the previous quarter. On the other hand, the sharp rise in public spending and positive contribution from the foreign sector have come as a welcome surprise.

Other activity indicators confirm the US economy is performing well. According to the field study regularly produced by the Federal Reserve (Beige Book), economic activity is still growing at a good rate and business and consumer sentiment continues to improve, auguring significant economic progress. In September the ISM for manufacturing stood at 56.6 points, a little below August's figure but clearly above the threshold of 50 points (the boundary between expansion and recession). The index for services also fell moderately to 58.6 points but is also still in the expansionary zone. For its part the Conference Board Consumer Confidence index climbed to 94.5 points in October, its highest for the last seven years, backed by improved expectations. Lastly, September's industrial production index also posted a surprising increase, accelerating to 4.3% year-on-year from the 4.0% posted in August.

The labour market still looks dynamic while real estate fails to take off as expected. Specifically 248,000 jobs were created in September, once again above the threshold of 200,000 that is indicative of a strong market. The unemployment rate fell by 0.2 percentage points to 5.9% while the participation rate remained almost flat at 62.7%. This stagnant participation rate slightly tones down the good unemployment figures since a part of the improvement is due to the increase in discouraged workers during the crisis. On the other hand, the latest figures from the real estate market continue to show that, although the sector is continuing to recover, its performance is still far from what was forecast, namely that this improvement would be a key support for US expansion. The Case-Shiller index of prices for 20 metropolitan areas slowed down once again in August to 5.6% year-on-year (6.7% in July) while, on the positive side, sales of both new and second-hand residential properties rose in September compared with August (0.2% and 2.4%, respectively).

The Fed ends its asset purchase programme within an environment of stable prices. In spite of the strong trend for US activity, inflation is still contained with September's CPI increasing by just 1.7% year-on-year, equalling August's figure. A further fall in fuel prices was offset by a rise in food prices and rent. For its part the core index (without foods or energy) also repeated its figure of 1.7%. Given this situation of below-target inflation, the Fed announced the end of its asset purchase programme but has repeated its intention to keep interest rates low for a «considerable time».

Downside risks encourage Japan's central bank to extend its programme of monetary stimuli. The recovery of the Japanese economy seems to be at a standstill given weak private consumption that is still suffering from the VAT hike carried out on 1 April this year (from 5% to 8%). Consumer confidence fell again in September down to 39.9 points, its lowest figure since May. Prices failed to be as dynamic as expected, remaining flat in September compared with August's figures (3.3% year-on-year, 1.3% discounting the VAT effect). Because of this, Japan's central bank surprised most analysts by deciding to increase its purchases of financial assets, a programme underway since April 2013.

The positive side of the coin is provided by industry. In September industrial production made up what it had lost in August, although the index is still below its level at the beginning of the year. Along the same lines, in Q3 the Tankan business sentiment index posted an improvement for manufacturing, machinery sales grew in September for the third consecutive month and exports picked up in the same month after looking lethargic in August. This contrast between one type of indicator and others illustrates just how difficult it is for Abenomics to set in motion a complete and sustainable expansion of the Japanese economy, especially when the determination seen on the monetary front is not accompanied by the same drive from the fiscal front or structural reforms.

China's GDP figure for Q3 allays fears of a hard landing. The Asian giant's GDP rose by a significant 7.3% year-on-year in 2014 Q3, in line with our forecasts but a positive surprise for the consensus of analysts. The good tone of the latest activity indicators points to growth still being solid in Q4. October's PMI, produced by Markit, rose slightly to 50.4 points (50.2 in September) while the industrial production index advanced to 8.0% year-on-year in September from a modest 6.9% in August. We have therefore kept our forecast for 2014 as a whole at 7.5%, in line with the IMF's estimate (7.4%). Nonetheless, in the short term some of the risks hovering over the country are far from disappearing. In real estate, 69 of the 70 cities analysed by China's National Bureau of Statistics reported falling house prices in September, a situation that contrasts with the 65 cities reporting increases at the end of 2013. In the long term the challenge consists of implementing reforms towards a «more market-driven» economy that enables a smooth transition towards a new model of growth. In this respect the fourth Communist Party Central Committee Plenum, meeting at the end of October, tackled questions regarding improvements to the rule of law in the country.

Disparity is still rife in the rest of the emerging economies. India, with considerable growth figures and significant improvements in correcting its imbalances, contrasts with Brazil and Turkey whose GDP growth in Q2 was disappointing and whose margin for expansionary policies is limited due to inflationary tensions (among other problems). India's wholesale prices grew by 2.4% year-on-year in September, far below the 6.4% at the end of 2013 while the worrying trend in Brazil's inflation, together with a weak real, has pushed Brazil's central bank to raise the official interest rate by 25 bps to 11.25%. This gives a clear warning signal to the government of re-elected President, Dilma Rouseff, on the need to tackle, decisively and without delay, the correction of imbalances and to implement the structural reforms the country needs. 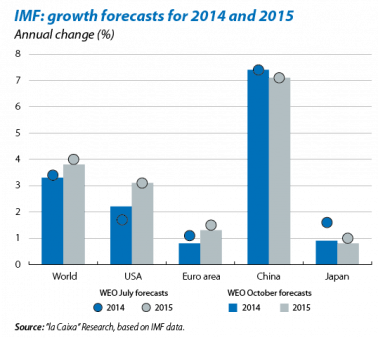 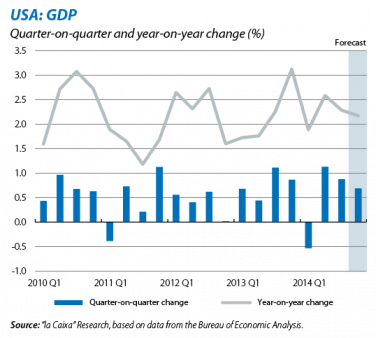 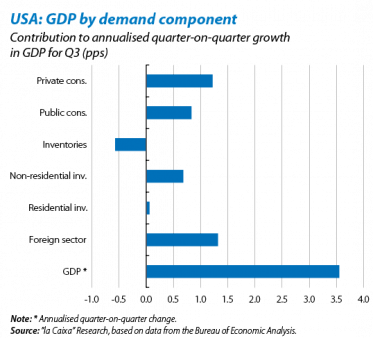 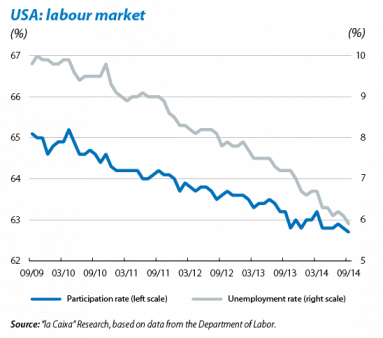 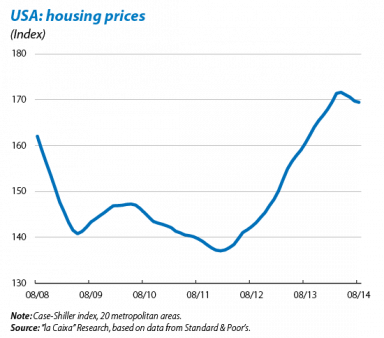 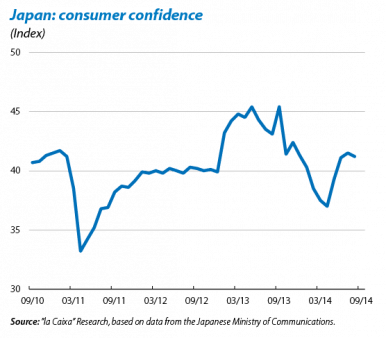 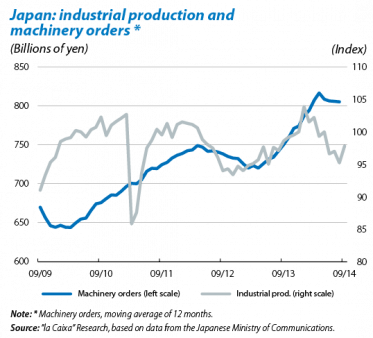 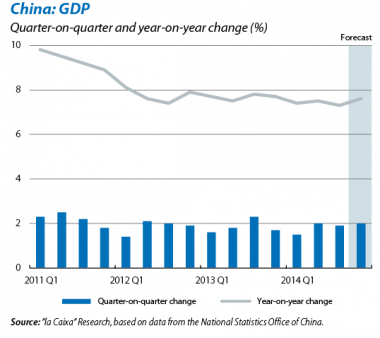 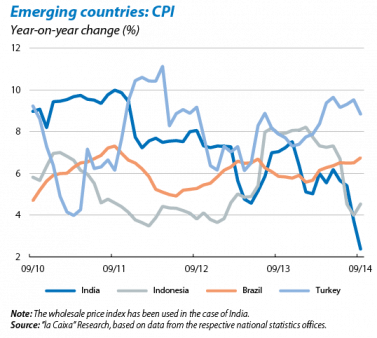