Volatility spikes in the financial markets

Financial volatility comes back on the scene in February. In January, investors were encouraged by the positive growth outlook, helping to push up the sovereign interest rates of the advanced economies and boosting stock markets. In February, however, this upswing in interest rates only continued in the US, with an additional rise of almost +20 bp in 10-year US sovereign yields. This movement reflected increased inflation fears for the US economy and, hence, greater investor confidence in the Federal Reserve (Fed) tightening its monetary policy stance. As a result, there were corrections in the US stock market which, in the first two weeks of February, spread to almost all international equity markets, leading to cumulative losses of around 10%. After this volatile episode, stock markets started to recover in the second half of the month, both in the advanced and the emerging economies. Nevertheless, they are still at a lower level than the end of January and even the beginning of the year. This episode was largely restricted to equity, however. Unlike previous stock market corrections, it did not seem to affect other financial markets to such a great extent.

Stock market corrections highlight some latent risk factors. Over the past few years, financial markets have enjoyed an environment of extraordinarily low volatility, supported by a scenario of good growth prospects and contained inflation. These tow elements are key conditions for monetary normalisation to be carried out gradually. However, such an environment could encourage complacency and lead to overvalued financial assets. As the stock market corrections early in February have reminded us, inflation shocks and changes in expectations regarding the Fed’s monetary policy stance may lead to further sharp readjustments in investment portfolios and more episodes of financial instability. Nor should we forget the latent threat of international geopolitical conflicts. These are a significant source of risk to which financial markets have been sensitive in the past.

The main international stock markets reported losses during the first half of the month. After considerable gains at the start of the year, the main international stock markets posted losses as from the last week in January, and corrections continued over the first 10 days of February. This correction, which began in the US with the publication of higher inflation and wage growth figures than expected by investors, spread rapidly to the rest of the international stock markets, both advanced and emerging. The end result was cumulative losses of around –10%. In particular, the US S&P 500 was down –10.2%, the Japanese Nikkei –12.3% and the UK FTSE 100 –8.8%, while the euro area’s main indices also posted widespread losses in the first fortnight of February (Eurostoxx 50 –9.4%, Germany’s DAX –10.7%, France’s CAC –8.4%, Italy’s MIB –8.8%, Spain’s Ibex 35 –9.1% and Portugal’s PSI20 –7.6%). Losses were also considerable among the emerging economies (the MSCI Emerging Markets Index was down –10.2%) and widespread across all regions. In Latin America, the episode resulted in losses of –11.1% in Brazil, –14.2% in Argentina, –7% in Colombia, –6.4% in Mexico and –5.9% in Chile, while in China the stock market was down by –12.1% and in Russia it lost –10.7%.

Stocks recovered during the last two weeks of the month, albeit unevenly. After the initial period of instability, international stock markets began to make up for their losses in the second half of February. Gains were made at different speeds, however. US and emerging stocks quickly returned to gains in the cumulative YTD figure while European equity lagged behind. Nevertheless, with the exception of some emerging indices, the stock markets were still down overall for February as a whole. The factors explaining this episode of stock market volatility are still present: doubts regarding the sustainability of high stock prices in the US, greater investor confidence in the gradual tightening of global financial conditions through Fed interest rate hikes and the withdrawal of QE by the European Central Bank (ECB), as well as technical factors that amplify movements such as automated trading, activated automatically when volatility spikes. Consequently, further corrections cannot be ruled out.

Advanced central banks follow their game plan. In a month without monetary policy meetings, neither by the Fed nor the ECB, attention turned to the details offered by the minutes of the meetings held in January. These were particularly important in the case of the Fed as, unlike the ECB, no press conference had been held after its meeting. The Fed’s minutes conveyed greater confidence in the outlook for the US economy, due partly to the bigger fiscal stimulus provided by the Trump administration. The minutes also suggested that the members of the Federal Open Market Committee (FOMC) may also upgrade their projections and carry out four hikes for the year as a whole (with the next one possibly taking place in March). The minutes from the ECB meeting in January did not provide any more clues than the information already given by President Draghi in the post-meeting press release and conference. The minutes repeated the Governing Council’s greater confidence in the macroeconomic scenario, reinforcing expectations of its forward guidance being adjusted in the coming months to prepare investors for the withdrawal of net asset purchases towards the end of 2018.

US Treasury yields continue to rise while European rates remain stable. As a result of the readjustment in investor expectations regarding the Fed’s monetary policy stance, and as market valuations projected an expected path of three interest rate hikes in 2018 for the first time since the Fed began normalizing it policy rates, the yield on US Treasury notes continued the upward trend observed in January. The cumulative increase for February as a whole was around 12 bp (2-year yield) and 20 bp (10-year yield). Europe’s sovereign interest rates, however, remained stable and risk premia contained, in the absence of any big news regarding the ECB’s monetary policy and with investors expecting monetary stimulus to be withdrawn very gradually.

The euro reacts indecisively against the dollar while emerging currencies remain stable. After starting February above USD 1.25, the euro ended the month at around USD 1.22 and looked rather volatile. Specifically, the euro had depreciated to USD 1.22 during the episode of stock market corrections, then appreciated again once stocks started to recover, breaking through the barrier of USD 1.25. Finally, in the last week of February, the euro calmed down again to around USD 1.23. Beyond this short-term volatility, the euro is likely to appreciate gradually over the coming months given the ECB’s preparations to withdraw its QE program and greater investor optimism regarding euro area economic activity. The emerging currencies remained relatively stable against the dollar over the month as a whole in spite of the depreciation suffered by the Brazilian real, Turkish lira and South African rand during the episode of stock market corrections. The Mexican peso and Turkish lira depreciated slightly (both by around 1%), as well as the Brazilian real and the Indian rupee (close to 2%), while the South African rand appreciated very slightly and the Russian rouble remained almost stable.

Volatile stock markets affect oil prices. After several weeks of fluctuating around USD 70, stock market corrections pushed down the price of Brent oil to USD 62 per barrel. This was further reinforced by the publication of data pointing to higher crude oil production in the US. However, as the financial markets recovered from the stock market losses, oil prices regained some of the ground lost and ended the month at around USD 66 per barrel. 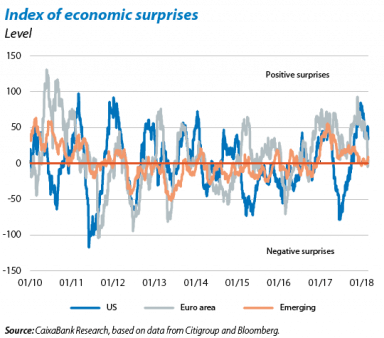 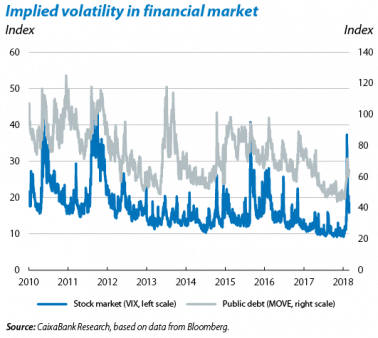 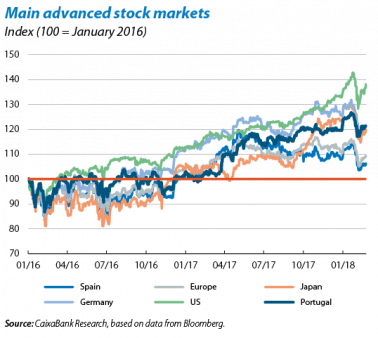 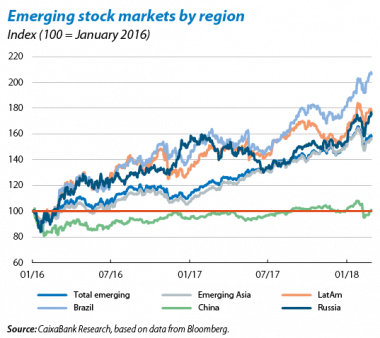 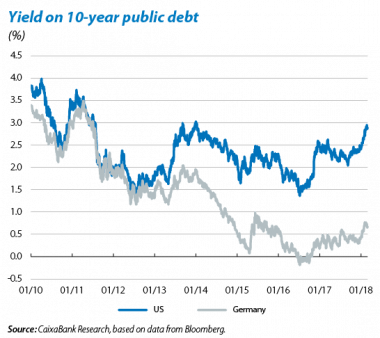 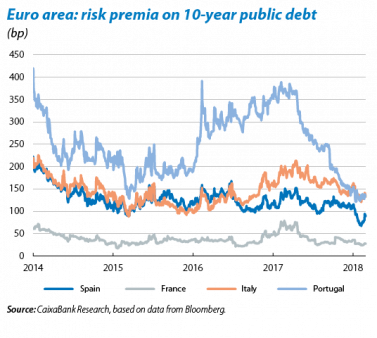 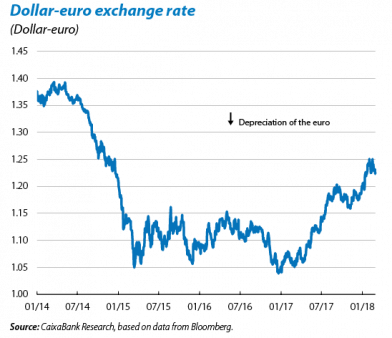 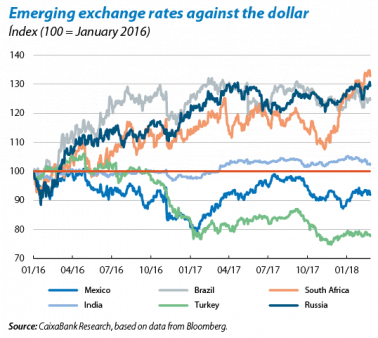 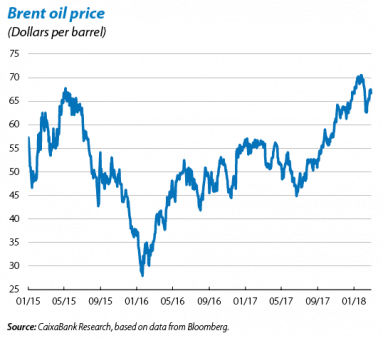