The world economy is taking its foot off the accelerator (but not slowing down too much). A slightly weaker end to 2015 than expected in many advanced and emerging economies and financial uncertainty being passed on to the real economy to some extent (reflected, for the time being, in sentiment indicators) have led to expectations of less expansionary growth in the world in 2016 than initially forecast. In particular, as a result of the downward revision in growth for this year in the US, Japan, the euro area and some emerging countries (such as Mexico and Indonesia) and of the intensification in the recession expected in Brazil, we predict that world growth will reach 3.4% in 2016 compared with the original forecast of 3.5%. In this scenario, the emerging economies as a whole will grow by 4.4% in 2016 while the advanced economies will grow by 1.9%. Global expansion will accelerate in 2017 thanks to the improved tone of the emerging countries and, to a lesser extent, the advanced group.

This downward revision of the main scenario has not reduced the likelihood of more adverse scenarios occurring. Although global growth will be lower than expected, the probability of a scenario occurring in which the high downside risks that still exist actually come about (including a hypothetical worsening of financial uncertainty, difficulties in ensuring a soft landing for the Chinese economy and further deterioration in the situation of fragile emerging economies such as Brazil, Russia, South Africa and Turkey) has not changed compared with our forecasts last month.

The US ends the year below par. According to the latest revised GDP figures from the Bureau of Economic Analysis, the US economy grew by 0.3% quarter-on-quarter in 2015 Q4, a disappointing figure both because it is lower than the growth in Q3 (0.5% quarter-on-quarter) and also because of its composition with repeated weakness in non-residential investment and exports. In spite of this downward end to 2015, however, growth for the whole of the year stood at 2.4%, the same figure as the one recorded in 2014.

The data from the beginning of 2016 do not suggest any immediate upswing in the economy. January's business indicators point to the economic pulse in Q1 being only slightly better than in 2015 Q4, even in the best of cases. In January the ISM indicator for manufacturing, although managing to stabilise its December level, remained at levels indicative of contraction in industrial production while the ISM indicator for services saw its third consecutive month of falls in January. Although this indicator was still above 50 points, suggesting expansion in the tertiary sector, other similar indicators such as the flash PMI for services produced by Markit placed this below the 50-point threshold. Changes in business sentiment are reflected particularly quickly by sentiment indicators for the construction industry and it is therefore logical for them to be capturing the financial uncertainty prevalent at present. A more nuanced interpretation is given by the US economic outlook obtained from demand indicators and particularly consumption, where an improvement has been observed in retail and consumer goods.

A scenario of a moderate slowdown is the most likely outlook for 2016. A disappointing end to 2015 and an only slightly better start to 2016 have partly affected our growth forecasts. Although the US economy will pick up speed as the year progresses, average growth, at 2.1%, will be below the figure posted the two previous years (2.4%). This slowdown is limited in its intensity as private consumption is holding firm, public consumption is speeding up and residential investment has maintained its rate of growth. However, the outlook for non-residential investment is more contained as it will no longer be supported by healthy corporate earnings. Given this situation, we believe the Federal Reserve will spread out its normalisation of the benchmark interest rate: whereas we had previously expected another hike from 0.50% to 0.75% in June, we now believe it will happen in September. This is merely a pause, however, since the conditions of inflation, which will continue to recover over the coming months, and the labour market (in January unemployment stood at 4.9%, the lowest since February 2008) justify monetary normalisation.

A stumble in Q4. Just when low but positive growth was expected, Japan's GDP fell by 0.4 pps in Q4, taking the average for 2015 to 0.5%. This economic decline was essentially due to the bad performance by private consumption and, to a lesser degree, exports. On the other hand investment looked dynamic and is, by far, the most positive aspect of GDP's composition. For its part inflation continued to reflect the feeble tone in domestic demand. In January the CPI without food but with energy (the Bank of Japan's benchmark) stood at 0.0% year-on-year, very far from its target of 2%.

Relative improvement in 2016. Based on these trends, we expect the economy to speed up this year but only at a moderate rate (0.9%, 0.1 pp less than we thought before knowing the GDP figure for Q4). Japan's recovery is facing three obstacles: perennially weak private consumption, lethargic exports (affected by a drop in purchases by US and China) and inventory adjustments. Given this situation, speculation is that economic policy will continue to support growth: in Q1 a new fiscal package will be implemented equivalent to 0.3% of GDP which is quite likely to be enlarged even further this same year, and the Bank of Japan will also probably adopt further measures of monetary expansion. However, the effectiveness of the monetary policy may be limited given the little effect recorded by previous similar measures.

China: no news from the front. The publication of macroeconomic data slows down during the festivities for the Chinese New Year and the few data published do not provide a very clear picture of the country's immediate outlook. The (official) PMI indicator for activity in January fell below the threshold of 50 points both for manufacturing and services while the Markit-Caixin PMI indicator points to a minimally expansionary tone in the tertiary sector. On the other hand exports and imports declined more in January than expected. Compared with these indicators for the real economy, the financial trend seems to be steadier than in the first few weeks of the year. After closing to celebrate the New Lunar Year, Shanghai stock market opened with gains at the same time as the yuan recovered part of the ground lost since the beginning of 2016. Given this uncertain situation, we have maintained our scenario of a gradual slowdown in GDP in 2016 and 2017, albeit with downside risks.

India, the exception of emerging Asia. As the soft landing for the Chinese economy gradually materialises and the acceleration in the advanced economies slows down, the rest of emerging Asia is reflecting such changes in the external environment by moderating its rate of growth. Prospects are especially more contained for Hong Kong, Singapore, Malaysia and Indonesia, justifying a certain downward revision of the GDP growth forecast for these economies in 2016. Given this situation, India's growth stands out favourably, both because of its rate (7.3% year-on-year growth in 2015 Q4) and its composition (in particular thanks to surprisingly vigorous manufacturing, traditionally one of the country's shortcomings).

Mexico and Brazil, two different ways of weathering the storm. Year-end data indicate that the recession in Brazil is becoming deeper which, added to a lack of improvement in the political arena and the intensification of imbalances such as inflation, represents a further deterioration it its prospects. Mexico, however, grew by 2.5% year-on-year in Q4 and its annual figure was the same. The data confirm a certain slowdown compared with the previous quarter which will continue in the coming quarters according to available indicators, the fiscal adjustment announced (0.7% of GDP) and the hike in the benchmark interest rate (from 3.00% to 3.75% between December and February). Nonetheless we believe that this country is applying the right economic policy, distancing it from Brazil's situation.

Oil: few changes, high volatility. The price of oil fluctuated appreciably in February, finally ending the month around 35 dollars per barrel of Brent crude, almost unchanged from its price at the beginning of the period. The underlying trends point to a moderate recovery in the price in 2016. However, taking a short-term view, what has dominated the trend in the oil price is the credibility of a possible agreement between the large producers to stabilise production, pushing up prices when this pact appeared solid and pushing them down when commitment seemed weak. 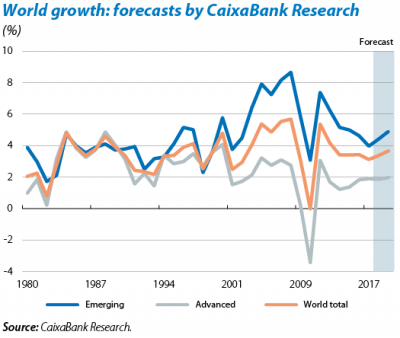 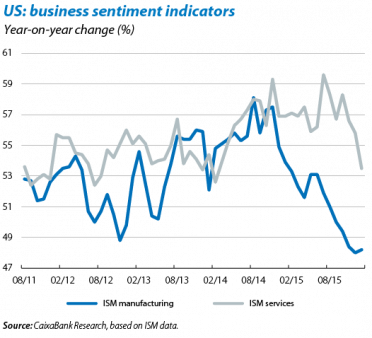 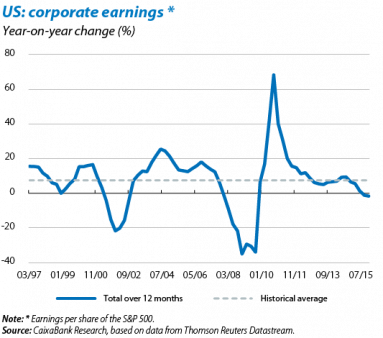 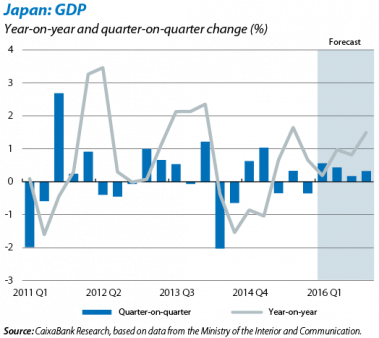 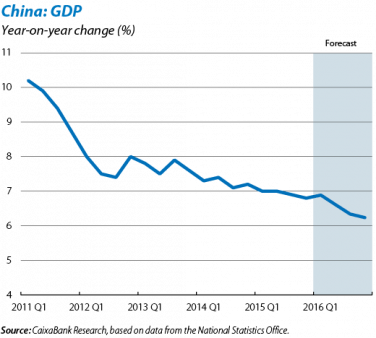 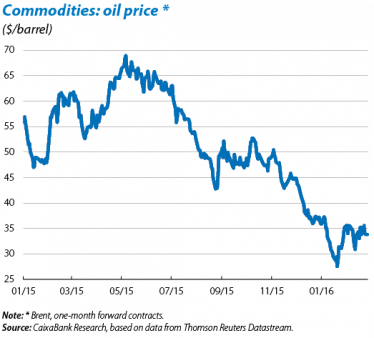