Good global economic data support a positive growth outlook for 2018. February’s composite global business sentiment index (PMI) rose to 54.8 points, its highest level in almost three and a half years. This improvement was relatively widespread, both across sectors and regions. The latest global indicators support the CaixaBank Research scenario of a slight acceleration in world growth this year, to 3.9% from 3.7% in 2017. This acceleration should continue due to broadly accommodative financial conditions, reasonable oil prices both for exporters and importers, and the recovery of large emerging economies such as Brazil and Russia, as well as continued good economic growth in emerging Asia. Additionally, business and consumer confidence indicators are still at relatively high levels.

Risks are still high, especially related to trade. Trump has raised customs tariffs on imports of steel (25%) and aluminium (10%) and is threatening further tariff hikes on a large number of imports from China, after a US investigation accused the Asian giant of misappropriating intellectual property, among other rather unorthodox trade practices. Internally, these measures led to the resignation of Gary Cohn, the President’s top economic advisor. Externally, such actions open the door to retaliations, especially by China, increasing fears of tenser trade relations and a detrimental protectionist shift. For the moment we believe this risk is appreciable but contained. One gesture by the US that encourages a more optimistic view is the fact that, in the end, the White House exempted the EU and other allies from its metal tariffs. We should also remember that imports of both products represent a relatively small share of all US imports (around 2%).

Geopolitical, political and macrofinancial risks still loom large. The geopolitical and political sphere has provided both good and bad news. While the restoration of diplomatic relations between the US and North Korea has lessened fears of a worsening conflict, the US, UK, Germany and France, among others, have all announced they are expelling Russian diplomats. The Americans because of cyber attacks and meddling in the US presidential elections at the end of 2016, and the Europeans in response to the attack against a former Russian spy and his daughter on British soil. Regarding European politics, the repetition of the Grand Coalition in Germany should boost the European agenda over the coming quarters but this might be hindered by the outcome of Italy’s elections, with an increase in populist support. Lastly, in the macrofinancial area, although the worst of the correction at the end of January and early February appears to be behind us, the main stock market are still erratic with significant risk factors.

Apart from the mire in which US trade policy now seems immersed, the economy is still strong in macroeconomic terms. Most US economic sentiment indicators continue to point to solid growth and slight acceleration in the first few months of 2018. In particular, the University of Michigan Consumer Sentiment Index reached a record high for the current business cycle in March. Along the same lines, the (ISM) Manufacturing Index rose to 60.8 points in February, also setting a new record for the cycle, while the Services Index remained comfortably in the expansionary zone (59.5, almost the same level as in January). Nevertheless, we should remember that Q1 GDP growth in the US often differs from the economic indicators (both soft and hard), due largely to seasonality problems with the GDP series produced by the country’s statistics institute. Moreover, some hard indicators such as the latest figures for retail sales and some real estate market indicators have been a bit weaker than expected.

A close eye needs to be kept on overheating as US economic activity is accelerating precisely at a time when the economy is in a mature phase of its business cycle. Markedly expansionary fiscal policies are also being implemented (tax cuts and greater spending in 2018 and 2019). Within such an environment, US growth is likely to remain high in 2018 (at 2.7%), above the country’s potential. In this mature phase, the risk is that growth will end up being lower than predicted while inflation could recover more strongly.

Watch out for inflation. Although inflation was in line with expectations in February, it will get stronger over the coming months and may even be higher than expected. Specifically, the CPI rose by 2.2% year-on-year in February, 0.1 pp more than the previous month’s figure. Core inflation, which excludes both energy and food, remained at 1.8%. In spite of February’s stability, we expect core inflation to accelerate over the coming months. This will partly be due to the acceleration in economic activity but also to a significant upward base effect (the sharp fall in wireless telephony prices observed the previous year will not be repeated this year). Given expectations of a stronger economy, the Fed decided to raise the fed funds rate again by 25 bp up to 1.50%-1.75%. The institution also presented its latest macroeconomic projections, which are somewhat more optimistic than the previous ones.

The Japanese economy ended 2017 with a higher growth rate than previously estimated, namely 1.7% (previously 1.6%). Positive growth in Q4 2017 was broadly supported by private consumption and non-residential investment (including public). The upward revision of the Q4 figure has also affected the CaixaBank Research scenario for 2018 and the growth rate has been raised to 1.5% (+0.2 pp). Core inflation continued to rise although still at a low level (0.5% in February). The wage rises predicted for 2018 could help to push up this inflation figure. At least this is suggested by the preliminary figures taken from the wage negotiations in spring: +2.16% annually, higher than 2017’s figure of 1.98%.

The National Congress of the Communist Party of China has set its 2018 growth target at 6.5%, a considerable figure but nonetheless a lower rate of growth for the country. The latest appointments to senior government positions, such as the economic advisor Liu He being made the new Vice Premier, have led to politics in favour of greater control and management of macrofinancial risks. In any case, economic activity indicators for the beginning of the year were generally positive, at least in the short term. As an aggregate for January and February, industrial production posted higher growth than expected, up year-on-year by 7.2% (6.2% in December). The January-February aggregate figure for retail sales also rose by a solid 9.7% year-on-year (9.4% in December). Nevertheless, business sentiment was slightly weaker. However, it should be noted that celebrations for the Chinese New Year, which can fall either in January or February, often cause distortions to indicators which are difficult to adjust for.

Brazil ends 2017 with positive growth (1.0%) for the first time since 2014. But its growth rate is still weak. In particular, in Q4, quarter-on-quarter GDP growth was just 0.1 pp (2.1% year-on-year), a minimal rate due essentially to a decline in exports and slightly weaker consumption. Growth in economic activity is expected to remain contained in 2018 and 2019 as consumption will recover slowly, political uncertainty will remain high and fiscal adjustments will continue.

Concerns increase in Turkey in spite of higher than expected GDP growth in 2017. In Q4 2017, Turkish GDP grew by a solid 7.3% year-on-year, bringing the annual figure to 7.4%, the highest since 2013. Nevertheless, Turkey’s economy has significant macroeconomic imbalances. Inflation stood at 10.3% in February, the country’s current account deficit was close to 5% in Q3 2017 and credit increased by more than 20% in year-on-year terms in Q4. Given this situation, Moody’s downgraded Turkey’s sovereign rating (from Ba1 to Ba2). In addition to the aforementioned macroeconomic weaknesses, which increase risk in the event of an external economic shock, the ratings agency also highlighted the deterioration in the country’s institutional quality. In fact, neither of these two aspects is new but this downgrade could aggravate doubts regarding the emerging economy. For instance, the Turkish lira depreciated substantially after Moody’s decision while the yield on its 10-year bond rose sharply. Taking all these factors into consideration, we expect Turkey’s growth rate to slow down considerably by the end of 2018. 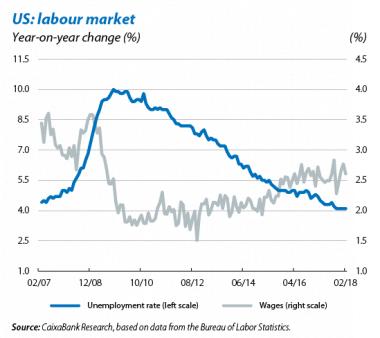 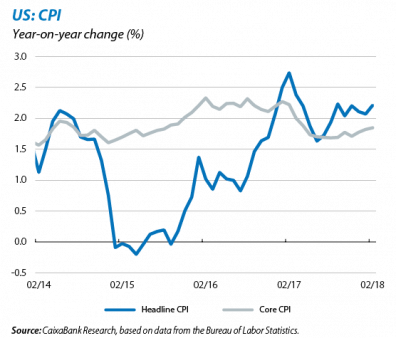 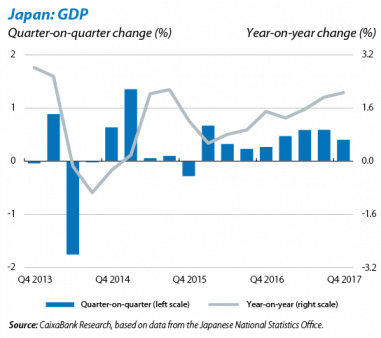 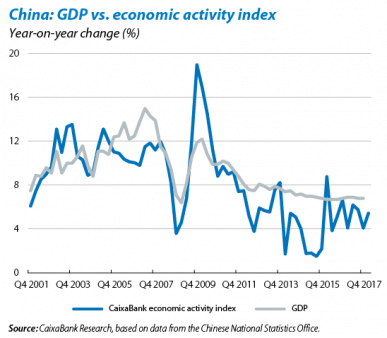