The world's economic cycle is improving and downside risks decline

The International Monetary Fund (IMF) has outlined a positive scenario for the next few years. In its recent report on the World Economic Outlook (WEO), the IMF has made few changes to the figures for its macroeconomic forecasts. World growth will be 3.6% in 2014 and 3.9% in 2015, in both cases 0.1 p.p. below its prediction in January but significantly higher than the figure from 2013 (3.0%). This notable acceleration is the result of the economic recovery in the US and Europe, helping to offset the decline experienced by some emerging economies (Brazil and Russia being the case in point). Japan's forecast has been reduced by 0.3 p.p. due to the effect of its VAT hike and is now slightly below its figure for 2013. Our scenario does not differ too much from the one proposed by the IMF (see the Focus «The IMF points to a definitive recovery in the world economy»). The report also states that downside risks are now less serious than a few months ago although still significant, particularly the likelihood of deflation in the euro area and potential financial and geopolitical tensions in some emerging countries.

The economy's 2.3% year-on-year growth in 2014 Q1 reflects the effects of the bad weather, a phenomenon that should not be repeated in the rest of the year. GDP hardly grew compared with the previous quarter: 0.1% in annualized quarter-on-quarter terms (2.6% in 2013 Q4), far below the consensus forecasts and our own estimates. Of note was the negative contribution by investment (both residential and non-residential) and exports, as well as the lower rate of growth in stock accumulation. Consumption stood its ground although mostly thanks to people's higher healthcare spending due to Obamacare (as they had to take out medical insurance during this first quarter). Nonetheless we estimate that, after this weak first quarter, the US will pick up again and see growth rates above its potential for the next two years (2.6% in 2014 and 3.0% in 2015).

The latest business indicators confirm the good performance of the US economy. According to the field study carried out regularly by the Federal Reserve (Beige Book), the US economy's expansion has not weakened after the winter setback. March's business confidence indices improved both in manufacturing (up to 53.7 points from 53.2 in February) and services (up to 53.1 points from 51.6 in February). The industrial production index also picked up considerably in March (+0.7% month-on-month) and February's figure was revised upwards. Concerning demand, the Conference Board consumer confidence index reached 82.3 points in April. Although still below its latest historical average (around 100 points), this indicator is notably higher than its average for 2013 (73.2 points). Retail sales, growing strongly in March by 1.1% month-on-month, confirm consumption's positive tone. The real estate market also remained steady although its improvement in 2014 is expected to be somewhat less than in 2013. Specifically the Case-Shiller price index, which covers 10 metropolitan areas, rose by 13.1% year-on-year in February compared with 13.7% year-on-year in 2013 Q4.

The labour market continues to recover and inflationary pressures are still at bay. March's good job creation figures and the upward revisions of figures from the first two months of the year suggest a significant improvement in the labour market. The US economy created 192,000 jobs in March, higher than the average for the three previous months (142,000). Although the unemployment rate held steady at 6.7%, the participation rate improved slightly to 63.2% from February's figure of 63.0%, without wages posing any kind of serious threat (remaining flat in March). Consumer prices have also remained moderate; the general CPI increased by 1.5% year-on-year in March (0.2% month-on-month) while underlying inflation (excluding foods and energy) rose by 1.6%.

It's complicated to interpret Japan's data due to the distortions produced by the VAT hike. The country's economy posted a record trade deficit in March. The sharp increase in imports (17.6% year-on-year), much higher than export's growth of 4%, resulted in a trade deficit of 2.8% of GDP (cumulative over 12 months). In addition to the energy bill, a large part of March's jump in imports can be put down to consumers bringing purchases forward to avoid the 3 p.p. effective hike in VAT April (from 5% to 8%). Retail sales therefore grew by a vigorous 11.0% year-on-year in March compared with 3.6% in February. This effect is bound to reverse over the coming months.

Given this situation, prices continue to rise in Japan but deflationary risks cannot be ruled out as yet. March's CPI accumulated an increase of 1.6% year-on-year (1.5% in February) while the core CPI (excluding foods andenergy) slipped back to 0.6% (0.7% in February). There is still no sustained rise in wages, a key condition for domestic demand to recover.

China starts the year with slower growth. China's GDP grew by 7.4% year-on-year in Q1 (1.4% quarter-on-quarter), lower than 2013's figure of 7.7%. This more limited growth has led us to slightly revise downwards our annual forecast for the next two years, namely 7.5% in 2014 (previously 7.7%) and 7.4% in 2015 (previously 7.5%). Nevertheless China's government believes that these figures are within a «reasonable range» and due to the rebalancing of the economy from an investor-exporter based model to one based more on consumption. Along the same lines, our main scenario still rules out any extreme scenarios (hard landing, financial crisis) as, in spite of the Asian giant facing significant risks (high government and private debt, the complexity of shadow banking and overheating in the residential sector), the government has a range of levers available. In fact, in mid-April it announced a mini package of fiscal stimuli including further railway investment, the construction of low cost housing and tax cuts for small firms. These new measures are similar to those applied last summer when growth also seemed to flag.

The latest business indicators rule out any sustained deterioration in the economy. In March, industrial production and retail sales grew slightly more than in January and February (8.8% and 12.2% year-on-year, respectively), while investment in urban fixed capital increased by 17.4% year-on-year (cumulative from January to March), only a little below the spectacular figure of 19.6% posted at the end of 2013. In April the flash Manufacturing Purchasing Managers' Index (produced by Markit) was higher than March's figure, indicating a slightly more dynamic economy.

Russia and Turkey ended the year in good health but 2014 looks complicated. Russia grew by 2.0% year-on-year in 2013 Q4 (1.3% on average in 2013) while Turkey saw 4.4% growth in GDP in the same quarter (4% annual growth in 2013). However, growth in 2014 is expected to be smaller for both countries: 0.8% in Russia due to its situation with the Ukraine and 2.0% in Turkey due to the need to carry out adjustments to control its imbalances (especially current account and inflation). In fact, price pressures are an endemic problem in many of the large emerging economies. In addition to Turkey and Russia, of note are the tensions in Indonesia, India (currently immersed in a long election process) and Brazil. Precisely in this last country and in Russia, their respective central banks have once again raised interest rates (to 11% and 7.5%, respectively) given an inflation rate in excess of 6%. The weakness of the latest activity indicators for Brazil also confirms the slowdown affecting Latin America's leading economy (2.0% forecast in 2014 with downside risks). India, in spite of also having considerable external and internal imbalances, is managing to distance itself from this group of weaker emerging economies thanks to a stricter monetary policy and the recent correction in its current account imbalance (5.6% forecast in 2014). 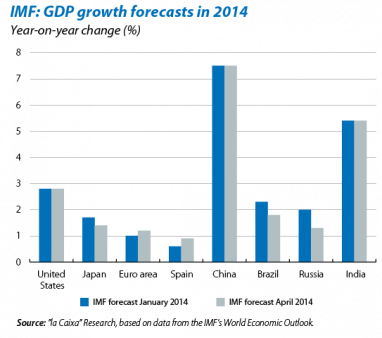 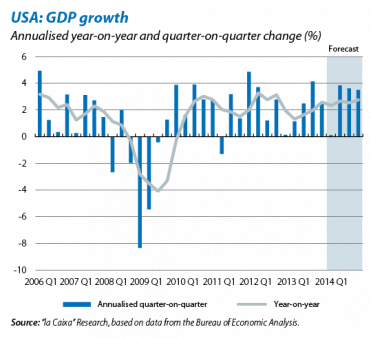 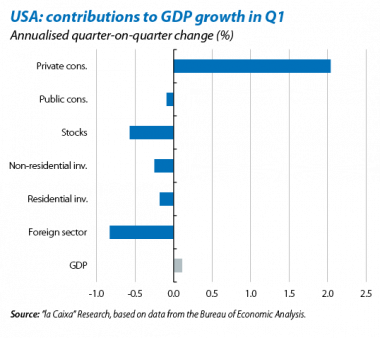 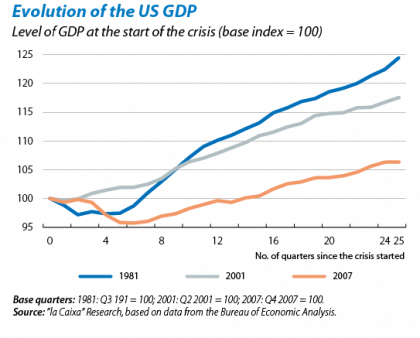 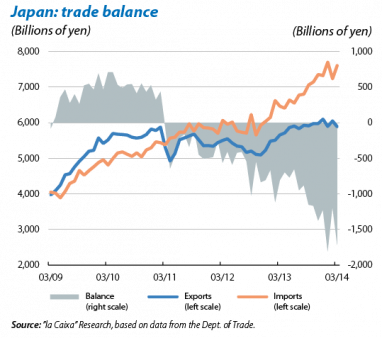 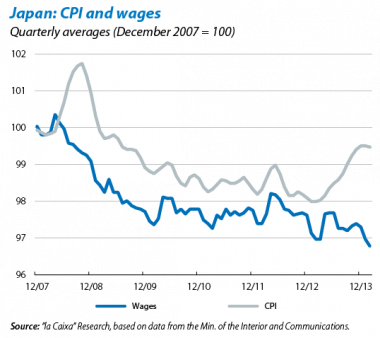 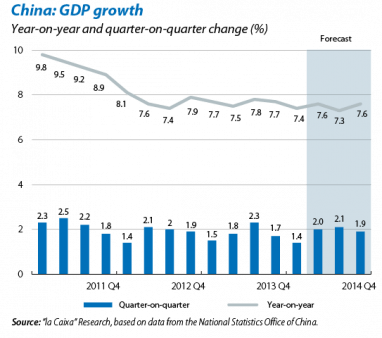 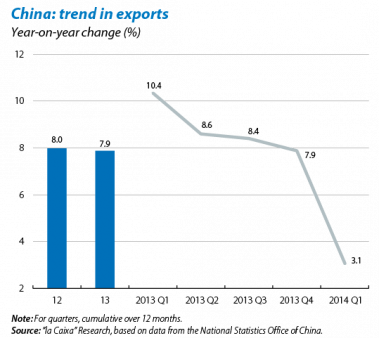 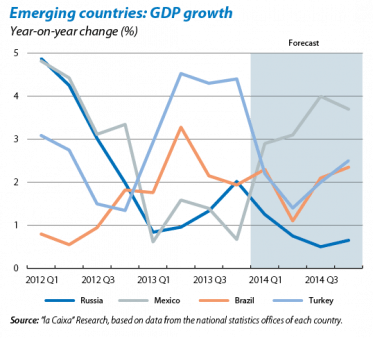