The euro area retains its tone in spite of global risks

The recovery continues in the euro area, where new factors of support come to the fore. In 2015 the euro area will have consolidated a slow recovery thanks to several favourable tail winds: the ECB's monetary policy, low oil prices and the euro's devaluation. The region is therefore managing to deal with its external risks such as the slowdown of the emerging economies which accentuated in 2015 but whose impact seems to be limited. As these temporary supports disappear, and in an environment of accommodative monetary policy and neutral fiscal policy, other factors will support growth in 2016: the recovery in global activity, the results of structural reforms already implemented and higher public spending as a consequence of the inflow of asylum seekers. The European Commission estimates that GDP will grow by 1.6% in 2015, 1.8% in 2016 and 1.9% in 2017. By country, of note is the slight worsening of growth forecasts for the core countries (Germany and France) and the improvement in the periphery (Italy and Spain).

The euro area's GDP grew by 1.6% year-on-year in 2015 Q3 (1.5% in Q2). The region's recovery still appears to be sustained with the largest economies improving their year-on-year growth rates: Spain (3.4%), Germany (1.7%), France (1.2%) and Italy (0.9%). The rate is slow, however: quarter-on-quarter growth was 0.1 or 0.2 pps less in Q3 than in the previous quarter, with the exception of France which has once again returned to positive growth. The German economy is growing solidly by 0.3% quarter-on-quarter thanks to strong domestic demand which contributed 0.5 pps to growth. However, exports deducted 0.4 pps from this growth due to a slowdown in exports and acceleration in imports (the change in inventories contributed 0.2 pps). The French economy also advanced by 0.3% quarter-on-quarter but the composition of its growth was more fragile: domestic demand contributed 0.3 pps and change in inventories 0.7 pps, entirely offsetting the negative contribution made by foreign demand (–0.7 pps). Although the breakdown of GDP growth by demand component has yet to be published for the rest of the euro area countries, the data point to a similar pattern: domestic demand adding to growth and foreign demand deducting due to a larger increase in imports than in exports.

Economic activity speeds up in Q4. The data available for Q4 point to a slight improvement in economic activity. The composite PMI has reached its highest level since May 2011, clearly in an expansionary phase (above 50 points) and the increases in the manufacturing and services indices suggest this is a generalised recovery. The economic sentiment index for the euro area also remained stable in November at 106.1 points. By country, of note is Germany posting PMI and IFO activity indices that are compatible with faster growth in Q4 while the increases were more modest in France, particularly in November. Nevertheless the impact of the terrorist attacks on the rate of activity is expected to be slight and concentrated in the services sector.

Consumption is also making good progress at the end of the year. The consumer confidence indicator reached –5.9 points in November (compared with –7.5 in October), above the figures posted in the last four months and indicating a good trend in private consumption in the euro area. There are no signs of the terrorist attacks affecting consumption although we cannot rule out a slowdown for France, albeit limited in scope and time, as happened in Madrid and London after their attacks a decade ago.

The improvement in activity is being reflected in inflation. General inflation rose by 0.2 pps in October up to 0.1% in spite of the continued slump in the energy component while core inflation reached an annual peak of 1.0%. The improvement recorded that month was the result of the firm progress seen by prices of industrial goods and services, as shown in the upward path of core inflation. In 2016 we expect general inflation to quickly align with core inflation once the effects of falling oil prices disappear and especially when they start to pick up again. Our forecasts also reflect improved activity via a continual rise in inflation for 2016 and 2017, which should reach 1.6% by the end of 2017, a figure in line with the European Central Bank's target (which is below but close to 2%).

Europe's banking sector is better prepared to support economic activity. The EBA's transparency exercise has analysed the capital, risk exposure and asset quality of 105 European banks, the results indicating an improvement in bank solvency thanks to retained earnings and the capital increases carried out. The capital ratio under the current criteria of Basel III (CET1 phase-in) reached 12.8% in June 2015 while the fully-loaded ratio (if all the Basel requirements were in force) would be 11.8%. Banks have also reduced their non-performing loan rate albeit with great disparity between countries and banks of differing sizes. The improved solvency of Europe's banks is enabling more loans to be granted, which is supporting the economic recovery.

Members of the euro area must continue working on economic convergence between countries to consolidate the recovery. The European Commission has started the European Semester by publishing its Annual Growth Survey 2016, rightly pointing out the importance of correcting imbalances between countries. Member States must implement measures that increase their productivity and competitiveness, especially those with a high level of private and external debt. However, the implementation of ambitious agendas of structural reforms looks complicated, in particular regarding the construction of the single market, in a Union where national interests seem to prevail over those of the group. Another aspect which the Commission is keeping a particularly close eye on is fiscal policy, which will be neutral in the euro area as a whole in 2016 and will not represent an obstacle to the recovery's consolidation. The public deficit of the euro area will fall from 1.9% in 2015 to 1.7% in 2016 and public debt will drop from 91% of GDP in 2015 to 90% in 2016, according to the European Commission. It should be noted that the Commission, on analysing the budgets of member States, has urged Spain to update its budgets due to the high risk of the country not meeting its targets, while it has asked Portugal's new government to present a public budget as soon as possible.

The refugee crisis adds an element of risk to the macroeconomic scenario for the coming year. The European Union is seeing unprecedented numbers of asylum seekers coming to Europe. UNHCR predicts that almost one million refugees entered in 2015 and that a further million will do so in 2016. It is too early to produce a reliable estimate of the economic impacts entailed by this migration as the final number of refugees is very uncertain. Moreover, the impact on each country will differ not only depending on the number of refugees it ends up receiving but also on their skillset, whether the country in question is a transit country or for settlement, access to the labour market, etc. However, the European Commission has provided a tentative estimate of their economic impact which is highly revealing. Firstly, the influence of all refugees on the level of activity will be positive, increasing the level of aggregate GDP by several tenths of a percentage point, especially by increasing public expenditure. Some of the refugees will also join the labour market which will raise the level of aggregate employment and may offset part of the effects of Europe's ageing population in the medium term. In any case the impact will largely depend on how successfully the refugees are handled and integrated. European countries certainly have a difficult task ahead of them.

Emerging Europe's recovery is becoming stronger. GDP figures for Q3 show that the region's countries are maintaining a high level of growth in line with their long-term potential, albeit somewhat lower than the rate in Q2. It is worth noting the positive surprise provided by the growth figures for the Czech Republic, Slovakia and, to a lesser degree, Romania while Hungary disappointed with lower growth than expected. In line with the scenario of moderate but continued acceleration in growth for the euro area, the outlook for activity in emerging Europe over the coming months is positive and most of the region's countries will see growth in excess of 3% in 2015 and 2016. 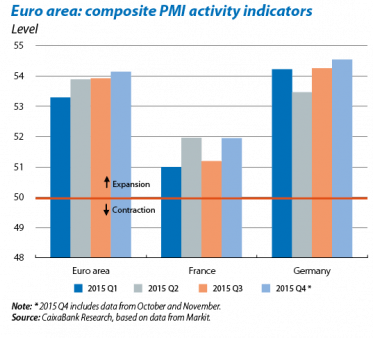 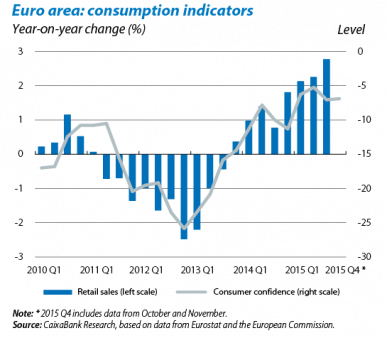 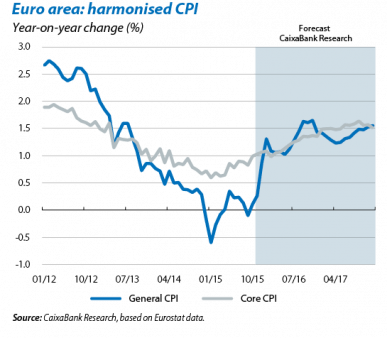 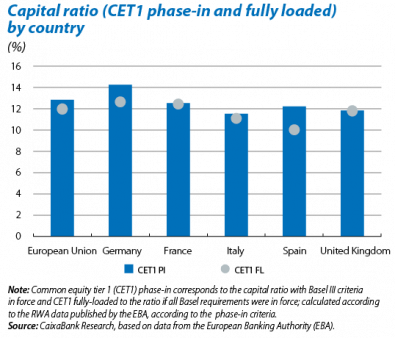 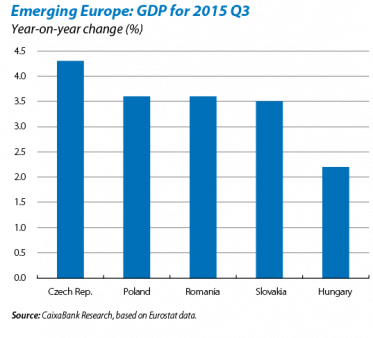