Exactly one year has passed since, in this same publication, we advocated that the origin of the European debt crisis be diagnosed properly, distinguishing the deep fundamental causes from the immediate ones, and for them to be remedied rather than just patched up. A lot of water has passed under the bridge since then, for better and for worse. For better, euro institutions and member state governments have made it very clear, through their actions, that they're irrevocably committed to the single currency; that they have identified the root of their problems; and realize that, in order to fix these problems, the very foundations of the union will have to be strengthened. The next step is obvious: determining the dose and starting to take the remedy. So why the delay?

Well, no matter how obvious the remedy may be, it's also highly complex. Strengthening the union's foundations is no mean feat: this entails institutional changes and national sovereignty concessions, both highly costly in political terms. As might be expected, such concessions involve a negotiation process that, given its nature, looks like being long, gradual and bumpy. Even more so when there's no clear agreement as to the model of union we should aim for. Consequently, the first thing that needs to be agreed is which foundations need reinforcing and to what extent.

Since it was devised, it has been common knowledge that the EMU is far from what economic theory had defined as an «optimal currency area». In particular, it suffers from an incomplete economic integration, especially in terms of the labour market; rigid prices, wages and structures that complicate adjustment to external shocks, affecting different member states unevenly; and the lack of an integrated budget system or mutualization of fiscal and/or financial risks, which would help to offset the previous two limitations. The persistently high tension and doubts regarding the viability of the single currency required actions to be taken along these three lines.

For cultural and language reasons, the margin for improvement in job mobility is limited and will take decades. This is why efforts are focusing on the other two fronts: reforming the institutional system at the level of country and perfecting the EMU's foundations. On the one hand, Europe's periphery countries are immersed in adjustments and structural reforms that aim to make their economies more flexible and improve macroeconomic discipline. On the other, the latest European Councils have started to outline a route map to reinforce monetary union; first via banking union and, later on, by progressing towards fiscal union.

Although unfinished, this route map is already being implemented: at October's summit, it was agreed to implement the first leg of banking union; a single supervisory mechanism for Europe's banking sector that aims to be in operation by 1 January 2013 and which should help to short circuit the vicious link between sovereign risk and bank risk via the direct recapitalization of banks. On the other hand, in December a report is expected from the four presidents (EC, Eurogroup, ECB, European Council), detailing the next steps to be taken towards greater fiscal integration.

Up to this point, there is consensus and everyone has started to do their homework, albeit compelled by the sense of urgency imposed by acute financial tensions and contagion between countries. Differences appear, however, in the exact dose and priorities, essentially resulting from a clash between the German and French visions for the future EMU. The former is focusing on the long term and is more ambitious in terms of the degree of integration (economic and political) it is pursuing. It's therefore demanding greater discipline and coordination in the economic policies of member states in exchange for supporting the mutualization of fiscal and financial risks. The French standpoint, however, devises a more modest model of union, principally because it's reluctant to give up too much sovereignty. From this point of view, the mutualization of financial risks via banking union would be enough to make the EMU more robust, considering fiscal union to be unnecessary or even redundant.

These disagreements, obvious and public, which have often led to opinion reversals (such as concerning the direct recapitalization of Spanish banks, agreed at June's summit and questioned at October's summit), have raised doubts regarding the implementation of the roadmap and damage the credibility of European authorities. These U-turns tend to destroy any signs of trust. In fact, such vacillation (and some reservations regarding the success of austerity policies) partly explains the reticence by the Spanish government in requesting a precautionary credit line from the ESM.

And there's certainly no room for doubts. At stake is not only a currency but also a project that has been years in the making. In which huge economic and political capital has been invested. At stake is the standard of living of several generations of Europeans. At stake is the geopolitical relevance of Europe in the future. All euro countries must be aware that breaking up the euro, whether traumatic or not, would have dire consequences for each and every one of them: centre and periphery. Judging by their actions during this crisis, they do seem to be aware of this: whenever tensions have forced them to make a move, everyone has done so in the right direction; more Europe, more robustness. The first ingredient for the euro's viability is therefore present: a common interest.

Nonetheless, negative thinking is not the route that offers the most guarantees to get the euro area out of the hole it's in – and which it dug for itself. As in any relationship that's hoping to be long-lasting, the best recipe for success combines three elements: a common interest, trust and empathy. The first thing is therefore to reconcile differences in points of view and create a project for the future that everyone can be enthusiastic about. Nonetheless, this is not enough on its own. In addition to generating enthusiasm, the project must also be credible, because it will take some time to achieve it; and it will entail sacrifices. These sacrifices only make sense if the goal is worth the effort and is plausible.

Making this project plausible will require mutual trust and empathy. Trust by the periphery in that the strategy being promoted to resolve the crisis is the best one and in that, in any case, if they commit to it, their partners will continue to support them throughout the adjustment process. Trust by the centre in the will of the periphery to correct their imbalances and in the fact that they won't backtrack once the situation stabilizes. Trust in the fact that the sovereign concessions and shared risks taken on will be equally distributed and fair. A firm commitment will be required to this common project in order to forge such trust but, most of all, this will particularly require empathy; that marvellous word that means being able to put yourself in another's shoes. The governments and citizens of the centre must understand that macroeconomic imbalances in the periphery are not entirely attributable to the extravagance of their governments and citizens, that the adjustments being demanded of them are painful and the fact that they are being taken on already denotes commitment. Those on the periphery must also understand that fiscal consolidation and competitiveness is a strategy for stability and future wellbeing and not a German obsession; that its fellow citizens in the centre are already helping them, investing part of their taxes in the European project; that what they want are assurances that it's worth investing and that the periphery isn't just taking advantage of their solidarity. This empathy is crucial to glue Europeans together, to speed up the negotiation process and, ultimately, to resolve the crisis.

The EMU has been compared to a marriage that's going through its first crisis and, as with any partnership, the outcome depends purely on the solidity of its foundations. The euro countries have demonstrated their belief that the future is more and not less union; by just adding trust and a good dose of empathy to the mix, the future of the euro area will be assured. 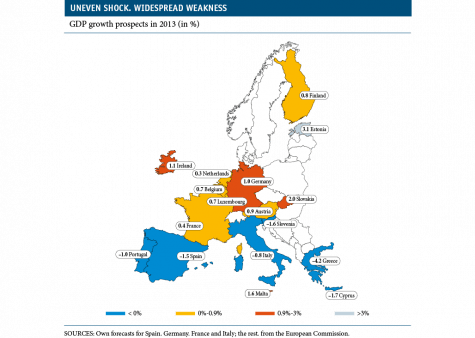