The European economy is still advancing after an episode of uncertainty. The International Monetary Fund (IMF) has revised its growth forecasts for the euro area slightly downwards after the turbulent episode registered by markets in 2016 Q1. However, this instability does not seem to have significantly affected the scenario for the euro area as a whole and the IMF's revisions are minimal. The institution expects the European economy to continue growing in 2016 almost at the same rate as in 2015 and also that this situation will continue in 2017. Nonetheless, although favourable forces (accommodative monetary policy, low commodity prices and a depreciated euro) and adverse forces (the slowdown in some emerging countries and financial and political uncertainty) balance out in the short term, the IMF has also noted that it is necessary to complement the expansionary measures of the European Central Bank (ECB) with structural reforms to boost long-term growth. The cases of Italy and France, the two main European economies for which the IMF expects lower growth and whose forecasts it has reduced the most, exemplify the possible consequences of a deadlock in structural reforms.

After eight years the euro area's GDP is back to its pre- crisis level. Both the US and the UK had already reached their pre-crisis levels six and three year ago, respectively. The preliminary GDP estimate also shows that the euro area speeded up its growth rate in 2016 Q1 with a quarter-on-quarter percentage change of 0.6%, higher than the figure for the previous quarter (0.3%) and the forecast (0.4%). In Q1 the European economy continued to benefit from the aforementioned temporary support factors. Of particular note is the case of France, which surprised analysts with 0.5% growth quarter-on-quarter, 0.3 pps more than the previous quarter. The French economy was supported by an increase in private consumption (+1.2%) and investment (+0.9%) although it is not certain whether this velocity will continue.

Activity is growing at a constant pace. Both the initial indicators published for 2016 Q2 and those that are still being announced for 2016 Q1 point to a moderate but stable expansion without any signs of negative impact from the recent episode of financial uncertainty. In this respect, February's industrial production, although falling by 0.8% in month-on-month terms due to January's exceptionally good figure, maintained a positive year-on-year growth rate (0.8%). The PMI indicators for April, stable and in the zone compatible with economic expansion (above 50), suggest that the recovery should continue to perform the same from now on, helped in the short term by the ECB's accommodative environment, low commodity prices and a depreciated euro. The negative note comes from France where the PMI indicators continue to flirt with stagnation.

Domestic demand is still driving the recovery. Indicators suggest that the financial uncertainty observed in the first quarter of the year has not damaged the euro area's domestic demand. Retail sales in February kept their year-on-year growth above 2% and were clearly higher than their average figure for the last six years. By country, the performance was particularly good by Spain (4.2%) and France (3.5%) while in Germany growth was somewhat more moderate (1.6%). Where financial instability does seem to have had an effect is on confidence indicators. In any case, although it has followed a downward trend in 2016 Q1, consumer confidence is still above its average level for the last few years and April's figure has improved on March. Along the same lines, and after three consecutive months of falls, the economic sentiment indicator also picked up in April. Moreover, with the support of the ECB's accommodative measures and a neutral or slightly expansionary fiscal policy, domestic demand is likely to continue driving the economy over the coming months.

Credit recovers, boosted by the ECB and domestic demand. The bank lending survey for 2016 Q1 indicates further relaxation in the criteria for granting loans to companies and for household consumption, as well as in the financing conditions of the loans granted. Banks point to low financing costs and competition as the main reasons for these easier conditions. With regard to the loans requested, the survey shows a rise in net demand by firms and households. Consequently both supply and demand factors are favourable for credit to flow towards companies and consumers.

Inflation is still in negative terrain. Further drops in the price of oil at the end of 2015 are still keeping consumer prices down, with inflation ending April at –0.2% and have now seen three consecutive months in negative terrain. Core inflation also slowed down its progression in April (0.8%) compared with the figure observed in 2016 Q1 (0.9%). Although the current levels are far from the ECB's 2% target, throughout 2016 there will be a rebound effect in general inflation once the base effect disappears of the slump in oil prices in 2015. We also expect both general and core inflation to be pushed up by the economic recovery and by the ECB's measures to inject liquidity. For this reason we expect both to be considerably closer to the ECB's target in 2017.

The labour market continues its gradual recovery. The figures published at the end of 2016 Q1 show a slow but sustained reduction in the unemployment rate in the euro area as a whole, standing at 10.2% (compared with 11.2% in March 2015). This improvement has also been widespread across the main countries. Specifically, Spain has made a significant contribution to this drop, closing 2016 Q1 with an unemployment rate 2.6 pps below March's figure in 2015. Unemployment is still high in the euro area as a whole but, according to the forecasts of CaixaBank Research, it will gradually fall from now on. Once again this gradual nature highlights the importance of carrying out structural reforms which, supported by the accommodative monetary environment, can stimulate the economy's growth potential and help to speed up job creation.

The fall in debt continues within a context of a neutral fiscal policy. Together with more accommodative monetary conditions, fiscal policy is expected to adopt a neutral or slightly expansionary position in 2016. In fact the data at the end of 2015 indicate a slight upswing in the public deficit in the euro area in 2015 Q4 which has nevertheless been compatible with a sustained reduction in public debt in the last year, up to 90.8% of GDP. By country, of note are the considerable reductions in debt in Germany, the Netherlands, Ireland and Italy, although the level of the last two is still high. On the other hand the debt to GDP ratio has not fallen significantly, not even in France (up by 0.4 pps) or in Spain (down by 0.1 pps), which also have high levels of debt. The fiscal positions of 2016 Q1 are therefore very different from country to country, so it is important for those with higher debt to take advantage of the favourable environment to continue the process of deleveraging and for those with a larger surplus to take advantage of the margin to adopt more expansionary fiscal policies to boost growth.

Italy is tackling the problem of bad debt with small steps. The Italian government announced the creation of a fund financed by the main banks, insurers and fund managers to tackle the problem of non-performing loans. These have rocketed in the last few years, exceeding 20% of Italy's GDP in 2014 and 2015, and are a huge burden on the economy's recovery, as reflected in the share prices of the country's major banks. At the same time as setting up the fund, the government has also announced reforms of the bankruptcy law to speed up the process of restructuring bad debt. The size of the fund, namely 5 billion euros, does not seem sufficient although its overall purchasing capacity will depend on the degree of leveraging and the discount factor applied to the assets. 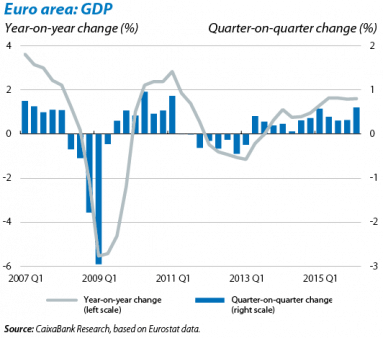 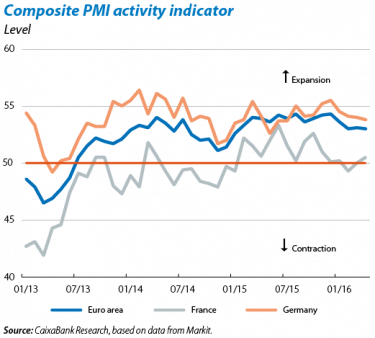 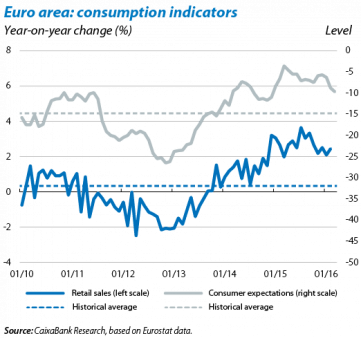 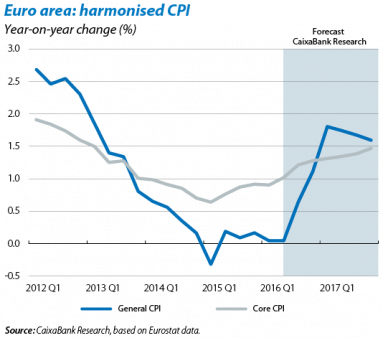 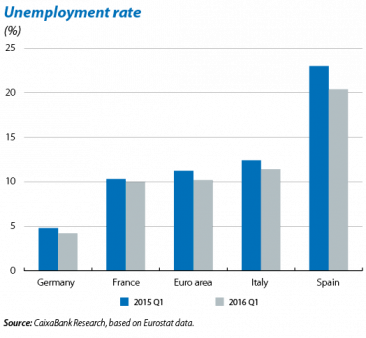 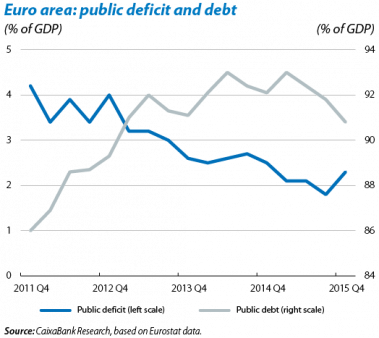 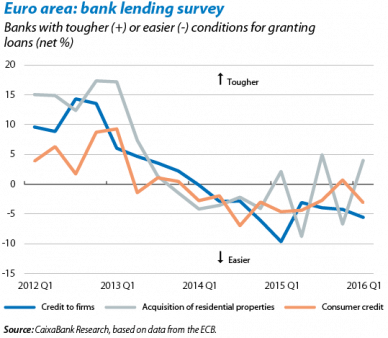 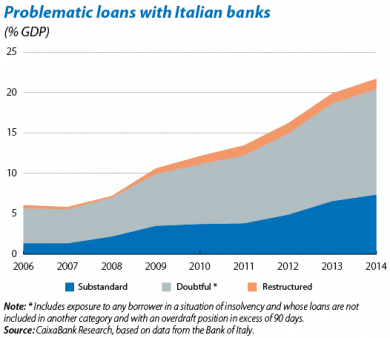