Global economic activity stepped down a notch in 2019, a year marked by the general slowdown of the economy. Following two years of high growth in which the global economy grew by 3.8% (2017) and 3.6% (2018), the data suggest a significant reduction in the pace of growth down to levels of around 3% for 2019 as a whole (specifically, 2.9% according to our estimates). The main culprit of this slowdown of the international economy is uncertainty, the key word of 2019. Without a doubt, uncertainty has risen primarily because of the trade tensions between the US and China, the political complexities of the EU (Italy, Brexit) and the global geopolitical situation (with the unrest in Hong Kong, Iran and Chile, among others). As such, an economy that was already affected by the maturity of the business cycle (and in which, therefore, a certain slowdown was to be expected) has also suffered the impact of uncertainty. This, in turn, has weighed down on foreign trade, investment and consumption: in short, economic growth itself. Despite the fact that the risks remain, at CaixaBank Research we expect that these pressures will recede in 2020 and 2021 and that the global economy will recover, although it will probably maintain lower growth rates than in recent years.

The trade tensions between the US and China intensified in 2019 following the temporary truce agreed between Washington and Beijing in December 2018. After applying tariff hikes in June and September, the US now has high tariffs on approximately 360 billion dollars of Chinese imports. China, in turn, has implemented them on some 60 billion dollars of US imports. These protectionist measures, and in particular the uncertainty over the future relationship between the two countries, can explain much of the decline in trade flows seen during 2019 (a decline which, on the other hand, has not occurred since the global financial crisis of 2008). Ironically, although the main trade conflict is between the US and China, for the time being it is other countries that appear to be taking the brunt of the heightened uncertainty, such as those in the EU, which are more sensitive to changes in global confidence and are more integrated internationally.

The manufacturing sector in advanced countries has suffered most notably due to the global uncertainty, but it has also been affected by a shock in the automotive industry (see the Focus «The difficulties of the global manufacturing sector» in this same Monthly Report). For the past six months, the global manufacturing PMI has stood below 50 points, the threshold that separates the expansive and contractive territories. Of particular note is the difference between emerging countries, where the sector bottomed out in mid-2019 and is already showing signs of a recovery (with a PMI of 51 in October), and advanced countries, where the manufacturing PMI remains well below 50 points (48.6 in October). Thus, these numbers point towards moderate growth in Q4 2019.

Europe has been the main victim of the deteriorating global environment in 2019, due to its openness to trade and its integration into the global economy. In November, the European Commission revised its growth forecasts for 2019 down in 11 of the 19 countries of the euro area, and in 17 countries for 2020. The underlying situation is one of a general slowdown in the European economy in 2019, with no signs of showing greater momentum in the coming quarters. Among the major countries, the most significant downward revisions were in Germany (–0.1 pp in 2019 and –0.5 pps in 2020) and Spain (–0.2 pps and –0.4 pps). According to the Commission, the main reason for this change is that, despite the fact that the risks of recession remain low, the factors that are hindering European growth will persist. Most notably, these include moderate growth in the global economy, the weakness of international trade and the problems in the global industrial sector.

GDP growth in the euro area remained at moderate levels in Q3 2019. In particular, GDP grew by 1.2% year-on-year (0.2% quarter-on-quarter), almost the same as the figure for the previous quarter, confirming that the European economy has got stuck at low growth rates. Nevertheless, domestic demand continues to support economic activity, with an impressive 2.2-pp contribution to year-on-year growth driven by consumption and investment. The decrease in the unemployment rate in October (down to 7.5%) tells us that the labour market has, for now, been resistant to the decline in activity that occurred in 2019. By country, growth has been particularly moderate in Italy (0.3% year-on-year and 0.1% quarter-on-quarter) and Germany (0.5% year-on-year and 0.1% quarter-on-quarter). The latter narrowly avoided a technical recession, defined as two consecutive quarters of negative growth. As for Q4, the behaviour of the economic activity indicators at the beginning of the quarter and the economic sentiment index for the euro area (ESI) point towards a similar growth to that of Q3.

Germany, the focus of various shocks. The German economy, which is very open and dependent on the industrial sector, has been particularly affected by the factors behind the slowdown in the global economy: the trade tensions between the US and China, the uncertainty surrounding Brexit and the problems in industry and in the automotive sector in particular. The tensions between the EU and the US also played a role, although the decision on whether to increase tariffs on imports of European cars will most likely be postponed until 2020. Signs that this uncertainty is affecting the German economy include the fact that some producers of German cars have already announced that they would increase their production in the US. The services sector, meanwhile, remains strong, with a PMI index above the 50-point threshold (51.3 in November). Nevertheless, there is still a risk that its ties with the industrial sector could end up holding it back more than at present. All in all, the latest economic activity indicators point towards a growth in Q4 similar to that of Q3 (0.1% quarter-on-quarter), thus suggesting that the German economy will grow by around 0.6% in 2019 (1.6% in 2018).

GDP showed strong growth in Q3 and remained resilient in the face of the external environment. In particular, the economy grew by 1.9% year-on-year (the same figure as in Q2) and by 0.3% quarter-on-quarter (0.6% in Q2), driven by domestic demand which contributed 3.2 pps to year-on-year growth. Thus, private consumption accelerated to 2.3% year-on-year, thanks to the improvements in the labour market, while investment continued to grow at a steady pace in Q3, albeit slower than in previous quarters: 5.8% in Q3, after growing by 8.2% in Q2 and by 11.3% in Q1. The contribution of foreign demand, meanwhile, remained negative (–1.3 pps), as a result of imports growing well above exports. All in all, it should be noted that exports accelerated up to 2.6% (1.6% in Q2), favoured by the strong performance in exports of non-tourist services. With regard to Q4, the available indicators suggest that the economy remains resilient. In particular, in October, the economic climate indicator grew by 2.1% (2.2% in September), while the coincident indicators remained stable and at favourable levels: 2.0% in the case of aggregate activity and 2.5% in the case of private consumption. All this leads us to expect a GDP growth of 1.9% for 2019 as a whole, and of 1.7% in 2020.

Tourism displays a healthy growth. In September, tourist lodgings registered year-on-year growth rate of 6.1% in the number of non-resident visitors (cumulative figure for the year), representing an acceleration compared to the figures for August (5.7%) and for 2018 as a whole (4.8%). By country, tourists from Spain, the US, Brazil, the United Kingdom and China were the main contributors to this acceleration, accounting for over 75% of the total growth. The average yield per available room, meanwhile, continues to rise (47.8 euros in September, +1.2% year-on-year), albeit at a slower pace than in previous years (+4.8% in 2018).

Inflation returns to positive territory, but remains very low. After the declines in the consumer price index (CPI) between July and September, and its stagnation in October (0.0% year-on-year), headline inflation return to positive values in November (0.3% year-on-year). This recovery reflected, above all, the rise in core inflation, which stood at 0.6% year-on-year in November (0.2% between July and October). Thus, in the absence of data for December, all the indicators suggest that inflation will stand at a contained 0.4% for 2019 as a whole, well below the 1.0% registered in 2018. This weakness compared to 2018 can be explained by the fall in energy prices and various government measures, such as those aimed at reducing the prices of electricity, public transport and telecommunications.

Job creation slows down, but wages support the growth in income. In October, job growth slowed to 0.9% year-on-year (1.2% in September), according to the seasonally-adjusted data published by the National Statistics Institute. The unemployment rate, meanwhile, remained stable at 6.5% for the second consecutive month, 0.1 pp below that registered in October 2018. Thus, the data indicate that a deceleration is occurring in the labour market, in line with the gradual slowdown in economic activity. At the same time, however, the average monthly gross wage per worker continues to rise significantly (+3.0% in Q3).

The general government balance is improving at a slower rate. In October, the balance reached 0.6% of GDP (998 million euros, cumulative data for the year to date), which represents a +0.2% improvement compared to the same period in the previous year. By component, the growth in income exceeds that of expenditure (4.2% and 3.2%, respectively). However, in October, tax revenues slowed compared to September due to the payment of income tax and corporation tax reimbursements, and due to the slowdown in the growth rate of VAT collections. On the other hand, staff costs grew substantially (4.7%, versus the 2.2% forecast by the government), but were offset by the fall in interest payments and a reduced execution of investment. 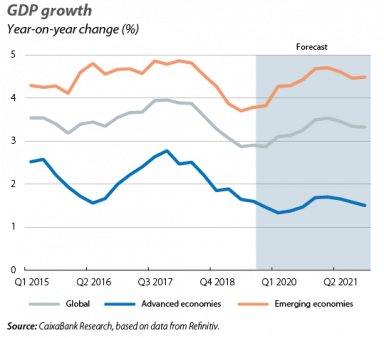 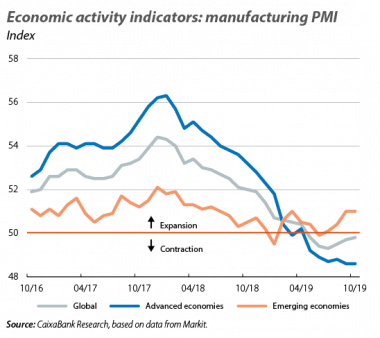 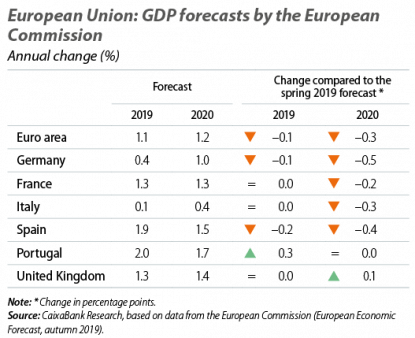 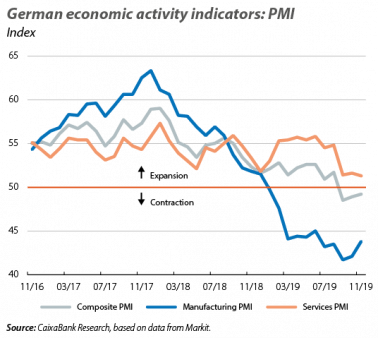 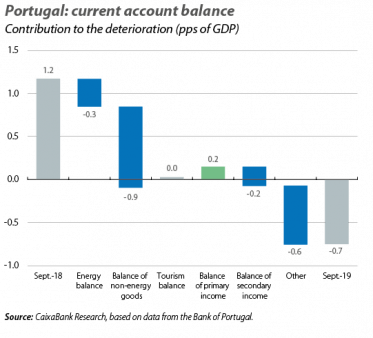 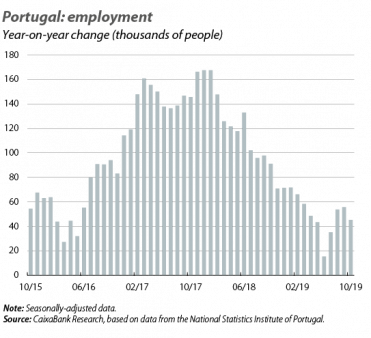 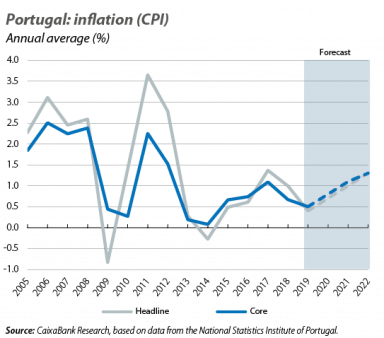 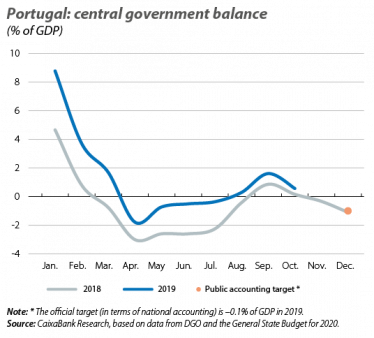