Fiscal adjustment in Spain: a look back and forward

Spain came under an excessive deficit procedure in April 2009 due to the deterioration in its public accounts caused by the economic crisis. On this date the European Commission issued a recommendation for the country to reduce its budget deficit to below 3% of GDP by 2012. However, given the unexpected worsening of the economy, the Commission issued three new recommendations between 2009 and 2013, extending the deadline for correcting the excessive deficit to 2013, 2014 and 2016, consecutively. On these occasions the Commission stated that Spain had taken effective measures to correct its structural deficit, attributing its failure to achieve the target to the increase in the cyclical deficit.

Throughout these years Spain made a considerable effort in terms of fiscal consolidation and managed to reduce almost half its total deficit, going from 11.0% in 2009 to 5.8% in 2014. This reduction was achieved thanks to a significant adjustment carried out via measures applied both to income and expenditure. In particular, between 2010 and 2013 Spain reduced its structural deficit by 5 pps via a cumulative increase of 13.2% in revenue and a 12% reduction in spending.1

More or less intensively, the structural deficit continued to be adjusted until 2014 (see the first graph) but deteriorated considerably in 2015. That year the public deficit stood at 5.0% of GDP and, given the country’s evident inability to meet the 2016 deadline for exiting the excessive deficit procedure, the European Commission granted two more years, up to 2018, to bring the deficit below 3%. On this occasion the European Commission believed that, unlike in the previous extensions, Spain had not taken effective measures to correct its deficit in 2015. In fact, last year the structural deficit increased by 1 pp as a consequence of the expansionary measures adopted and the cuts in Income Tax and Corporation Tax, structurally reducing the country’s capacity to collect revenue. Consequently, the 1.8 pps adjustment in the cyclical deficit, resulting from the positive trend in the economy and low interest rates, was not enough to achieve the deficit target, set at 4.2% of GDP (see the second graph).

The new path agreed with the European Commission has set deficit targets of 4.6%, 3.1% and 2.2% of GDP for 2016, 2017 and 2018, respectively. Although the 2016 target seems achievable, for 2017 new measures would have to be passed to consolidate the public accounts as the improvement in the cyclical deficit due to the economy’s good performance will not be enough to meet the target. Specifically, the Commission believes that structural measures are needed in the order of 0.5% of GDP both in 2017 and in 2018 (around 6 billion euros annually). Without such measures the required structural adjustment would not be carried out and the total deficit could exceed 3.6% of GDP next year.

Taking advantage of the current favourable economic context to put Spain’s public finances in a solid position must be a priority. Otherwise it might be forced to adjust its accounts in a less propitious environment. 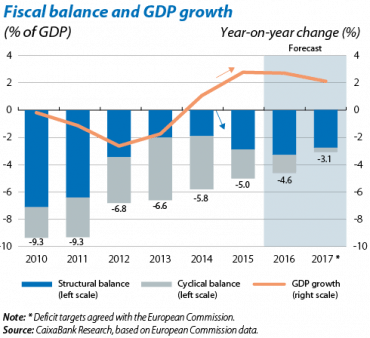 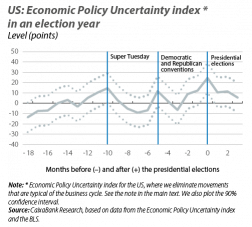 The US Democratic presidential candidates: proposals and reactions