Before the global financial crisis hit in 2007, the public accounts of the countries in Europe seemed to be solvent. Time, however, has revealed that this was not the case. One sign of this are the fifteen excessive deficit procedures (EDPs) brought by the European Commission between February 2009 and May 2010 for violating the Maastricht criteria, which set the maximum general government deficit at 3% of GDP. An occurrence that, up to a point, is understandable given the size of the recession in question.

However, the difficulties encountered by some countries in sorting out their public accounts, notably the so-called periphery countries, highlighted the fact that the public financing model was not sustainable in many countries in the euro area. It was necessary to undertake far-reaching reforms to redress the public accounts. The problem lies in the fact that structural reforms require broad social consensus that is difficult to achieve in times of crisis and, moreover, their effect is not immediate. The consequence of all this is well known: the worst economic and social crisis in Europe for decades. However, the urgency of the situation has led to many far-reaching reforms being adopted, both at a European and country level. In the midst of so much bad news, it's important to note that the first results are now becoming visible.

Let us start at the beginning. Between 2007 and 2009, public deficit ballooned, particularly in the periphery. As can be seen in the graph above, Ireland and Spain headed the list of countries with the sharpest deterioration in their fiscal balance during this period, with falls of 14.0 and 13.1 percentage points respectively. The rise in Greece and Portugal's fiscal imbalance was also considerable, albeit more contained, namely 8.8 and 7.0 percentage points in each country. Only the Italian deficit performed similarly to the average for the main countries in the core, with growth of 3.8 and 4.1 percentage points respectively.

But beyond the initial impact of the crisis on public accounts, what fuelled uncertainty regarding the periphery's capacity to achieve fiscal consolidation were the initial difficulties encountered in redressing the deterioration in public accounts. The slight fall in public deficit occurring in 2010, less than one percentage point for the periphery as a whole, added to the widespread failure to meet their deficit targets for 2011, increased doubts regarding these countries' ability to adjust their public accounts.(1) In fact, unlike the core countries, none of the periphery countries, with the exception of Italy, has managed to achieve the demanding pace of fiscal consolidation established in their EDPs. The consequent revisions made to the adjustment process merely magnified the wariness of investors regarding the periphery's ability to stabilize public debt at a sustainable level.

In 2012, however, there have been numerous signs of significant efforts being made in the periphery. According to the forecasts of the European Commission (EC), the deficit will have fallen by 4 percentage points of GDP between 2010 and 2012. Specifically, the periphery closed 2012 with an average public deficit close to 5% of GDP, just two percentage points above the limit set by the Maastricht criteria.

In this respect, it's important to note that the countries on the periphery have had to make much more of a fiscal effort than those in the core. Not only have they reduced their public deficit by one percentage point more during this period of time but have done so under much more adverse economic conditions. According to EC forecasts, the periphery's GDP will have fallen by 0.4% between 2010 and 2012 in nominal terms while rising by 5.5% in the core countries. This does not only mean that the deficit as a percentage of GDP is automatically higher (because the denominator is lower) but also that a country has to make more of a fiscal effort to reduce its deficit within a recessionary context. Shrinking activity reduces potential revenue and, at the same time, increases spending due to greater demand for welfare benefits.

A second obstacle faced by the periphery is the sharp rise in spending on debt interest payments. This increase is partly due to the higher level of debt. According to EC forecasts, in 2012 public debt will have risen to 115.3% of GDP in the periphery, 40 percentage points above the level of 2007. On the other hand, financial tensions in Europe's sovereign debt markets have led to sharp increases in the cost of financing. Consequently, expenditure on debt interest will have exceeded 4% of GDP in all periphery countries in 2012 except for Spain, which remains at 3%. In the core countries, however, this figure is significantly lower.

In short, Europe's periphery can, at last, provide solid proof of the effects of the adjustments it is carrying out. The community of international investors is therefore likely, albeit gradually, to regain confidence in the solvency of these countries' debt, which should help the markets to reopen, also gradually, and lower financing costs. This should also make it easier to re-establish Economic and Monetary Union as it will defuse the arguments of those who most distrust the capacity of the periphery to integrate within the standards of the core. However, the adjustment process is far from over. The countries on the periphery are in a highly vulnerable situation and would be unlikely to survive another economic shock. The process of rebalancing their economy is still both necessary and urgent and must be accompanied by economic and political stability in the euro area as a whole, at the same time as making progress in the institutional reforms for monetary union.

(1) Due to data availability, 9 of the 17 euro area countries have been analyzed. The core is made up of Finland, France, Germany and Belgium and the periphery by Greece, Ireland, Italy, Portugal and Spain. The criterion for assigning countries to one group or another is based on their initial surplus or deficit, respectively, regarding the current account balance.

This box was prepared by Joan Daniel Pina and Oriol Aspachs 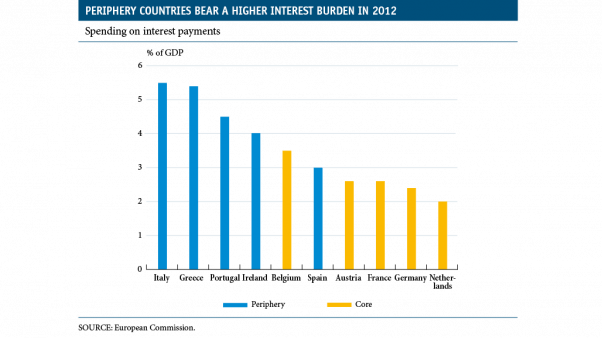