Exports are playing a big role in the Spanish economy’s performance. Since the end of 2007 they have gone from 25.7% to 33.2% of GDP and have contributed to half the cumulative nominal growth for the economy as a whole since 2013 Q3, when the economy started to recover. It is therefore vital to examine to what extent exports might be a structural strength over the coming years. A good way to begin is to ask where Spanish exports end up; i.e. in which markets Spanish firms are making the most effort and the most progress.

Based on IMF data regarding the trade of goods by country of origin and destination, we have defined an export propensity index (EPI), this being the fraction of a country of origin’s exports (such as Spain) to a destination country D (as a percentage of all Spanish exports), divided by the fraction of the world’s exports to country D (as a percentage of all the world’s exports). An EPI above one indicates that Spain’s commercial relationship with country D is especially important.

The geographical mapping of Spanish exports confirms a general conclusion for world trade: distance matters, and a great deal. Beyond this phenomenon, there are four more significant ideas: eurocentrism, the importance of North Africa, neutrality in Latin America and a delay in Emerging East Asia. The eurocentrism of Spanish exports is reflected by an EPI of 2.2 for the euro area in 2015, higher than the EPI of France or Germany, both of which export more intensively outside the EU (see the first graph). However, in dynamic terms Spain stands out, together with Germany, as the economy that has diversified the destination of its exports the most since 2000. Albeit starting from a higher level, Spanish exports reduced their dependence on the euro area more than French or Italian exports in the period 2000-2015 (see the second graph). It is also worth noting the positive fact that Spain is taking more advantage of the EU’s enlargement towards the East with a significant increase in the EPI to Poland, Bulgaria and Romania.

Regarding other regions, Spain’s export propensity is also higher to North Africa, especially Morocco (IPE of 11.7). This propensity with Morocco is higher than for France (4.8) in spite of the language ties between both countries. The growth experienced by this region and the fact that Morocco, unlike its neighbours, performs better in manufacturing than in commodities represent a positive note for Spanish exports.

Spain’s export neutrality to Latin America (IPE of 1.0) may come as a surprise given the country’s language and cultural ties with the region. However, it should be noted that the Spanish EPI in Latin America is double that of France or Germany. The delay in Asia, however, is more worrying. The EPI for exports to Emerging East Asia (China, Hong Kong, Taiwan, India, ASEAN, Pakistan and Bangladesh) is a low 0.2 and is not growing. It is also much lower than the figure for German, French and Italian exports. Given that imports by Emerging East Asia went from 16.5% to 25.7% of the world’s total between 2000 and 2015, we can conclude that Spain should increasingly focus on Asia. 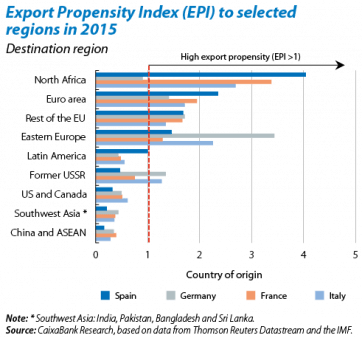 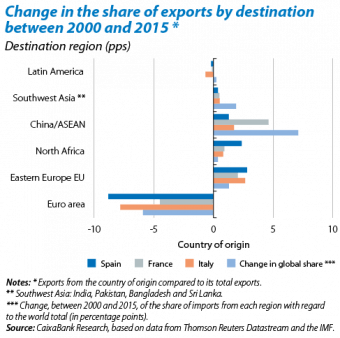