International trade has been an important source of economic growth over the last few decades, both for emerging and advanced countries.1 However, their growth rates have slowed down considerably in the past five years. Several factors lie behind this slowdown but the one that is causing the most controversy is the rise in protectionism, especially after Trump’s election and his promise to levy large tariffs on Chinese and Mexican imports.2

Trade was boosted considerably during the 1980s and 1990s. The most far-reaching and successful multilateral agreement in history belongs to this period, namely the Uruguay Round which was implemented between 1986 and 1994, involved 123 countries, affected a wide range of sectors and concluded with the creation of the World Trade Organization (WTO) in 1995. In that period, there were also important regional trade agreements in Europe (Single European Act in 1986) and North America (NAFTA in 1994), and of relevance was also China’s accession to the WTO in 2001. However, since then there have been almost no multilateral agreements to liberalise trade.

Protectionist trade policies have also increased over the past few years. The fact that a large number of countries are members of the WTO limits the use of more traditional trade distortions measures such as raising tariffs or imposing import quotas. Hence, today countries implement protectionist measures that are more difficult to detect, such as aid for corporate financing. According to data gathered by the Global Trade Alert (GTA), which include these less conventional measures, in 2015 the number of new discriminatory measures against foreign companies is 50% higher than in 2014, from 500 to 1,000, and the signs point to this trend increasing in 2016 (see the first graph). According to the WTO, the total number of protectionist measures in force by mid-2016 was almost four times higher than the number in 2010, 1,263 compared with 324 (see the second graph).3

Although there has been an evident rise in protectionism, this seems to have played a limited role in the weaker trend for world trade, at least to date, as the measures implemented have affected less than 2% of trade flows according to the GTA. In its latest World Economic Outlook, the IMF also states that the quantitative impact of protectionism has been limited. The IMF has analysed the effect of protectionism together with that of the deceleration in trade liberalisation since both factors are actually related, concluding that the latter has not played any key role either in the change in the world trade slowdown.

The message from the OECD is slightly less optimistic, however, attributing 25% of the trade slowdown in the past five years to both factors (increased protectionism and slower rate of liberalisation), albeit stressing that most of this effect comes from the waning pace of trade liberalisation. In any case, should the uptick in protectionism continue, it will also end up hindering global trade.

3. It should be noted that it is difficult to quantify the number of protectionist measures as these are often concealed within other broader policies to escape notice by the WTO. The series produced by the GTA therefore differs considerably from that produced by the WTO, as it attempts to reflect these more opaque measures. The GTA estimates that the discriminatory measures considered by the WTO underestimate the real situation by more than 50%. Although both graphs in this Focus show a rise in protectionism, the second (which focuses on stock) could not be produced based on the first (which focuses on flows) as the data come from different sources. 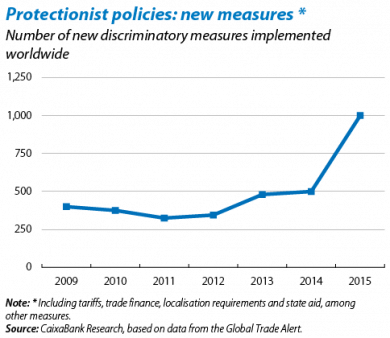 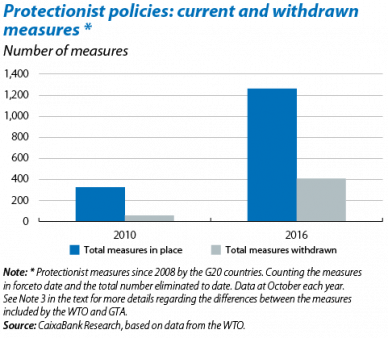