The good momentum continues in spite of political uncertainty

The increase in GDP surprised positively and analysts improve their growth forecasts for 2016. In Q2 the Spanish economy maintained its growth rate and, for the fourth consecutive quarter, advanced by 0.8% quarter-on-quarter while a slight slowdown had been expected in the pace of growth. This good figure, together with activity indicators for Q3 that are still very robust, have led many analysts to revise upwards their GDP growth forecast for 2016 to rates close to 3%. For example, CaixaBank Research predicts growth of 3.1%. It should be noted that this improvement in the growth prospects for Spain’s economy has occurred within an uncertain political environment at a domestic level. The excellent tourist season and stability in financial markets (the yield on Spanish sovereign bonds reached an all-time low during the summer) may have helped to maintain a favourable climate of confidence.

The drop in domestic demand was larger than expected but exports contributed positively. The breakdown of GDP in terms of demand shows that the contribution made by domestic demand to year-on-year growth in Q2 (3.2%) fell to 3.0 pps, 0.8 pps less than in the previous quarter. This dip can be explained by an extremely sharp fall in public consumption in real terms (–1.6% quarter-on-quarter). However, this has not been reflected in greater fiscal adjustment as public consumption in nominal terms increased by 0.4% quarter- on-quarter, partly because of the refund of 50% of the extraordinary pay withheld in 2012 for civil servants. External demand made a positive contribution of 0.2 pps to year-on-year growth in GDP (–0.4 pps in Q1) thanks to the good trend in exports and more contained growth in imports. These data indicate that the Spanish economy is gradually shifting towards a more balanced model of growth in which the rise in domestic demand is compatible with a positive contribution by the foreign sector.

The main engines of the recovery, private consumption and business investment, are still very strong. The rate of increase in private consumption fell by 0.3 pps in quarter- on-quarter terms but remains at a strong 0.7% and is still the driving force behind GDP growth. This dynamism can be explained by the good performance of the labour market and, specifically, by job creation as wages are still very contained. Among the other factors helping to boost consumption are the improved borrowing conditions, partly due to the ECB’s accommodative monetary policy and banks’ greater capacity to grant loans to households. Also positive is the trend for investment in capital goods (2.3% quarter-on-quarter in Q2), proving that business confidence is still looking healthy in spite of the political uncertainty, while investment in construction is gradually gaining traction (0.9% quarter-on-quarter).

On the whole, the labour market trend is positive, beyond the seasonal nature of Q2. According to the LFS, job creation was notable in Q2 (up by 271,400 people, placing the number of employees at 18.3 million) although somewhat lower than expected after the number of registered workers affiliated to Social Security had suggested a higher figure. The year-on-year rate of change for employees therefore slowed down to 2.4% (3.3% in Q1). In terms of full-time equivalent jobs (FTE) in the National Accounts system, the year-on-year rate also slowed down to 2.9% (3.2% in Q1). This rise in employment helped the unemployment rate to fall considerably to 20.0%, 1.0 pp less than the previous quarter. This substantial drop in unemployment is typical in Q2 as it coincides with the start of the tourist season but it should be noted that the recovery in the labour market is generalised throughout all sectors of activity. The private sector created the most jobs (2.7% year-on-year) while the public sector saw more modest growth (1.3% year-on-year). Some improvement can also be seen in the quality of the jobs being created: full-time employment grew more than part-time (3.0% and –0.6% year-on-year, respectively) and permanent employment contracts continued to increase (2.0% year-on-year in Q2 compared with 1.8% in Q1).

The good performance by the labour market continues in the second half of the year. The rate of increase for registered workers affiliated to Social Security speeded up in July to 3.1% year-on-year, posting its largest rise in the month of July since the start of the crisis. Meanwhile the rate of decrease in registered unemployment speeded up to –9.0% (–8.6% in June) and the number of unemployed stood at its lowest figure since August 2009. Over the coming months we expect a moderate slowdown in the growth rate of workers affiliated to Social Security, as happened with employees according to the LFS in Q2 and in line with the more restrained growth in GDP expected in the second half of the year.

Inflation is picking up quickly, as expected. The CPI posted a year-on-year change of –0.1% in August, 0.5 pps above July’s figure, confirming the prediction that inflation will rise rapidly over the coming months as the base effect disappears of the slump in oil prices at the end of 2015 and beginning of 2016. Pending details by component, this variation can be explained by fuel prices (diesel and petrol) falling less than last year, as well as by the increase in electricity prices compared with the drop in 2015. Core inflation (0.7% in July) will also continue its modest upward trend, boosted by the dynamism in private consumption.

The trend in the foreign sector is highly favourable. Specifically, exports of goods grew by 2.1% year-on-year in June thanks to a solid performance by non-energy exports (4.0% year-on-year). Imports of goods, however, decreased by 0.9% year-on-year, helped by the slump in energy imports (–77% year-on-year) as a consequence of low oil prices. Consequently, the balance of goods from January to June (–7,878 million euros) improved significantly compared with the same period in 2015. In addition to the balance of trade, also notable was the improvement in the income balance thanks to low interest rates and much higher exports of services, reflecting the good tourist season, with arrivals of international tourists increasing by 11.1% year-on-year in July (cumulative figures over 12 months), reaching 42.4 million for the year to date. In summary, the good data for the foreign sector in the first half of the year suggest that the current account will once again post a surplus for the year and is very likely to exceed the figure of 25.6 billion euros (1.4% of GDP) recorded in 2015.

The European Commission allows two more years to reduce the public deficit below 3% of GDP. Within this favourable economic climate, on 12 July the European Commission concluded that Spain had not taken effective measures to correct its deficit in 2015. However, on 27 July the European Council decided not to impose a fine on Spain (or on Portugal either) and relaxed the pace of fiscal adjustment required. The new deficit target proposed for 2016 (4.6% of GDP) seems feasible but new measures will have to be approved to consolidate Spain’s public accounts in order to achieve the target agreed for 2017, an effort that should not be postponed given the relentless rise in public debt (100.6% of GDP in Q2).

The banking sector, more solvent and resilient, is granting more loans. On 29 July the results were published from the EBA’s stress tests in order to assess the resilience of European banks to a severe deterioration in the macroeconomic situation. Spanish banks passed this test easily and were notable for the moderate impact of the adverse scenario, demonstrating the results of restructuring and rebalancing efforts made in the past by the sector. In fact, progress is still being made in this area: the NPL ratio fell to 9.4% in June and the balance of doubtful loans fell to 122.5 billion euros, accumulating a decline of 38% since the peak reached in January 2014. Spanish banks are therefore improving their capacity to increase the flow of credit to households and firms, as confirmed by the figures for new loans up to June. Specifically, consumer credit and loans for housing purchases increased by 14% and 38% year-on-year, respectively. In the case of non-financial firms, while loans to SMEs continued to flow (8.9% year-on-year), new loans to large firms decreased sharply (–11.8% year-on-year) due to the better conditions offered by financing via corporate bonds. This trend will continue over the coming months thanks to the ECB’s expansionary monetary policy, which will help to improve bank funding conditions and the corporate bond market. 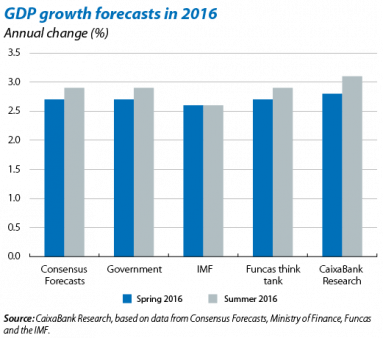 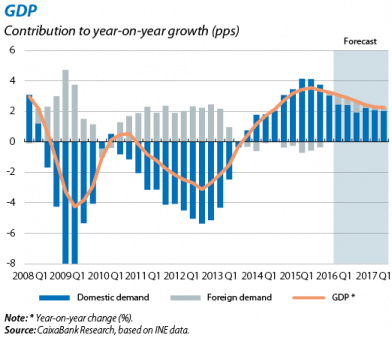 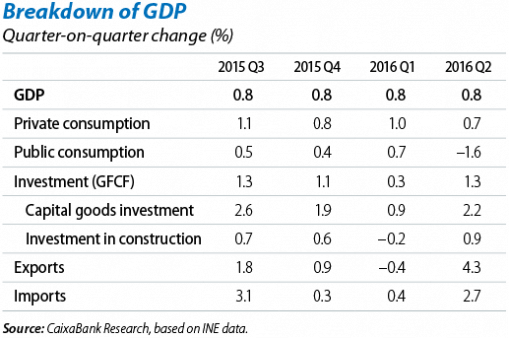 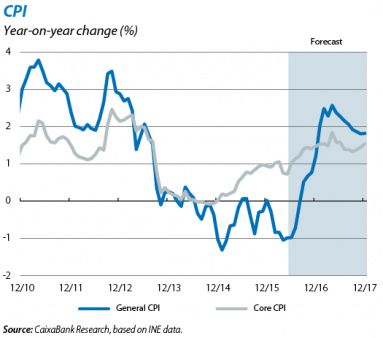 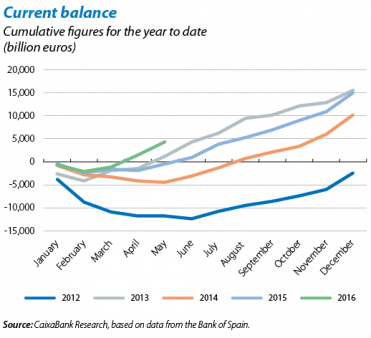 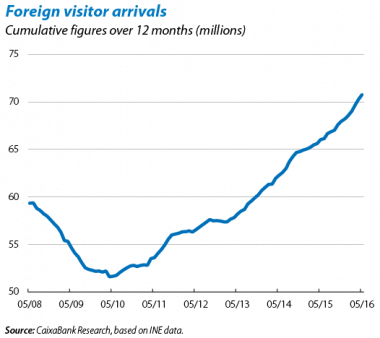 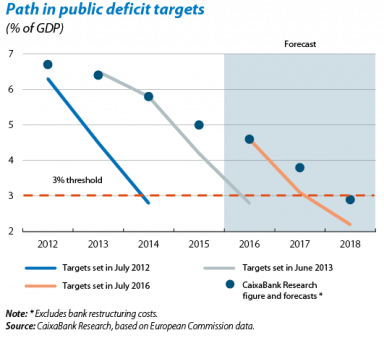 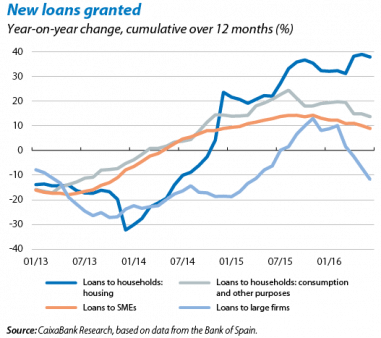