A healthy end to 2016 for economic activity

GDP growth remains strong and growth forecasts for 2016 and 2017 have improved. In 2016 Q3, the Spanish economy grew by 0.7% quarter-on-quarter (3.2% year-on-year), in line with the CaixaBank Research forecast. However, the revision of the historical series, which states that, in the first half of 2016, the Spanish economy grew slightly more than previously announced, and the acceleration in activity shown by the early indicators for Q4, particularly in the labour market, have led us to revise upwards our GDP growth forecast for the whole of 2016, from 3.1% to 3.3%. The upward revision for 2017 is also appreciable, from 2.4% to 2.6%. The bulk of the evidence therefore suggests that growth will remain strong and considerably higher than the advances made by most other developed countries. According to CaixaBank Research forecasts, this good pace of growth means that, in 2017, the Spanish economy will exceed its level of GDP achieved in 2008, before the recession started. We should also note that, although the rate of growth will be slightly lower than the figure posted in 2016 because of dwindling support from tailwinds (oil prices and the ECB’s monetary policy), the trend for the underlying factors will continue favourable. Fiscal policy is also expected to be less expansionary than in recent years, which will strengthen the international community’s confidence in the long-term sustainability of Spain’s public finances.

The main components of domestic demand still show a good underlying trend. Private consumption remained strong in Q3, up by 0.6% quarter-on-quarter (2.8% year-on-year), which is nevertheless a slight slowdown in comparison with the vigorous growth of the first half of the year. The good performance by the labour market and the favourable credit conditions encouraged by the ECB’s accommodative monetary policy and banks’ greater capacity to grant loans to households will all help private consumption to maintain this good tone throughout 2017. With regard to investment, capital goods expenditure rose by 0.3% quarter-on-quarter (4.9% in year-on-year terms). A look at business confidence indicators and the PMI for economic sentiment suggests that capital goods investment, which is now at the same level as 2007, still has room to increase and that this slowdown in Q3 should be interpreted as a small break after a year and a half of uninterrupted strength. For its part, investment in construction grew by 2.0% year-on-year, continuing a cautious upward trend far from the excesses of the past.

Domestic demand is being supported by the recovery in the labour market, which accelerated in Q3 with a 0.8% increase in employment in terms of full-time equivalent jobs quarter-on-quarter, bringing the year-on-year rate to 2.9%, 0.1 pps higher than Q2’s figure. This is in addition to the good figures posted by the Labour Force Survey for Q3 (226,500 new jobs, an increase of 2.7% year-on-year). It should be noted that the private sector still leads the job creation rate (3.7% year-on-year) while the public sector saw a slight slowdown (0.6% year-on-year). Permanent employment contracts also rose by 1.9% year-on-year.

Job creation figures are still good in Q4. In October, the number of registered workers affiliated to Social Security was higher than expected with 107,457 new contributors, seasonally adjusted, while the pace of job creation speeded up to 3.4% year-on-year (3.0% in September). The rate of reduction in registered unemployment also increased to –9.9% (–9.1% in June) and the number of unemployed stood at its lowest level since September 2009. Although a certain moderation is expected in the job creation rate for the end of the year, these latest figures have led CaixaBank Research to revise upwards its forecast for the job creation rate for the whole of 2017 from 2.1% to 2.3% and consequently lower its forecast for the unemployment rate in 2017 from 18.2% to 18.0%.

The recovery in inflation is in line with expectations. The CPI posted a year-on-year change of 0.7% in November. The breakdown by groups, available up to October, shows that this recovery in inflation can be explained by higher electricity prices compared with the drop in 2015, and also by fuel prices (diesel and petrol). The year-on-year rate of change for these last two groups (in euros) has been picking up since August 2015 and will continue pushing up the CPI until mid-2017. Meanwhile core inflation (the general index without unprocessed food or energy products) rose by 0.8% year-on-year in October, continuing a gentle upward trend supported by dynamic private consumption, although the negative impact of the groups of food and leisure and culture meant that October’s figure was slightly lower than that of August and September.

The foreign sector is performing very well. August’s current account balance stood at 1.9% of GDP (cumulative over 12 months), clearly above the figure of 1.4% for the whole of 2015, and will more than likely end the year at 2.2% of GDP, the best figure for the historical series. This improvement in the current account balance reflects the reduction in the trade and income deficits (helped by low interest rates). The exports of goods in the last 12 months up to September increased by 1.8% year-on-year, boosted by the performance of non-energy exports (3.5% year-on-year) while imports of goods fell by 0.3% year-on-year as these are still being affected by the slump in oil prices. Regarding the services balance, the end of the summer did not stop the good performance by tourism this year. The number of international tourists arriving in Spain in the period January-September reached 60.3 million, up by 10.1% compared with the same period in 2015. In 2017 the current surplus will fall moderately in GDP terms, especially due to the expected rise in oil prices, which will push up the energy bill.

The government presents new budgetary measures to meet its deficit target of 3.1% of GDP in 2017. Most of these measures focus on the reform for corporation tax, which limits tax breaks and is expected to increase revenue by 4.3 billion euros (of the 7.5 billion estimated). Also important is the hike in special taxes and a new tax on sugary drinks. The target for the fiscal deficit in 2016, namely 4.6% of GDP, seems feasible. Up to September, the fiscal deficit (excluding local government corporations) stood at 3.1% of GDP, 0.2 pps below August’s figure (this does not include losses due to financial bail-outs). By administration, the central government budget improved its trend significantly, standing at 1.9% of GDP in October, 0.1 pp below the figure one year ago. This improvement in the last month is due to the recent return to split payments for corporation tax, which should help to achieve the 4.6% deficit target for 2016. The autonomous communities also posted a deficit of 0.2% of GDP, improving on September’s figure by 0.9 pps.

The banking sector consolidates its improvement while the real estate sector continues to recover. The NPL ratio for the banking sector, which was 9.2% in September (1.5 pps lower than last year and 4.4 pps below the peak of December 2013), is continuing to fall, helped by the improvement in economic activity and particularly in the labour market, as well as by more dynamic sales of doubtful loans. Although this favourable trend could be affected in the short term by the implementation of the Bank of Spain’s Annex 9 (a new accounting treatment for provisions to cover non-performing customers), it is still expected to continue. Regarding the real estate sector, house prices fell slightly in 2016 Q3 in quarter-on-quarter terms (–0.4%), pushing down year-on-year growth to 1.6% (2.0% in Q2). Nevertheless, this trend can partly be explained by the seasonal nature of prices in Q3. This, and the sharp rise in sales, which grew at a rate of 13.2% year-on-year in September (cumulative over 12 months), suggest that the sector’s recovery will continue to gain traction over the coming quarters. 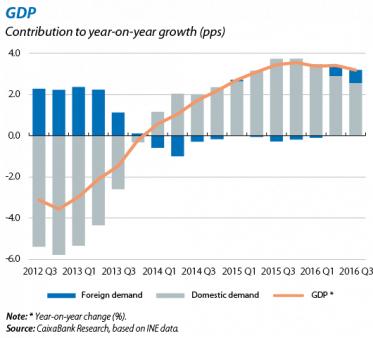 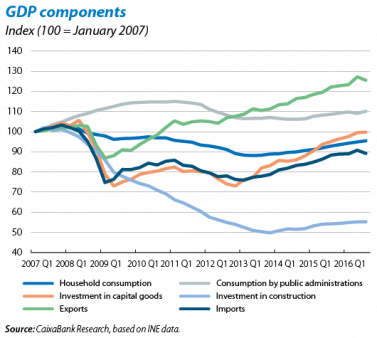 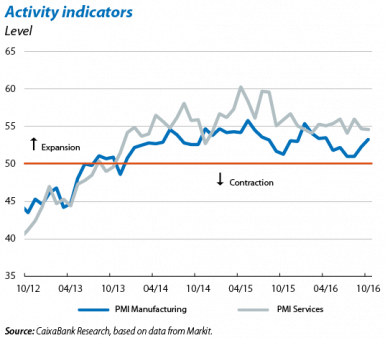 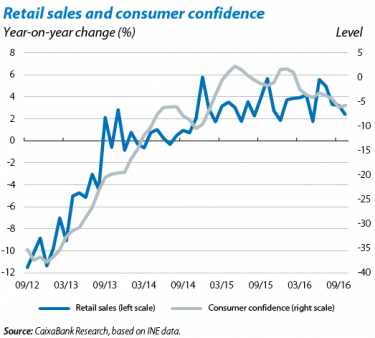 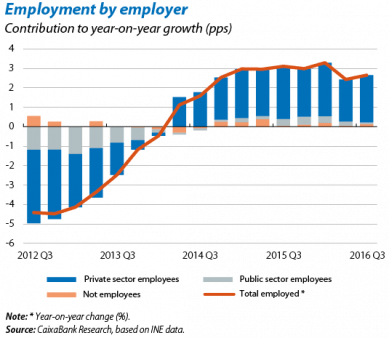 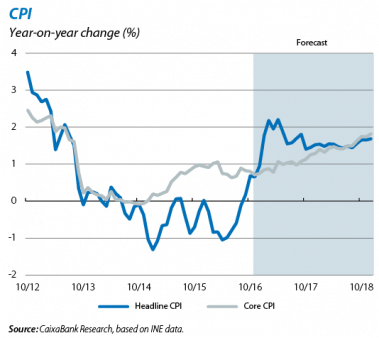 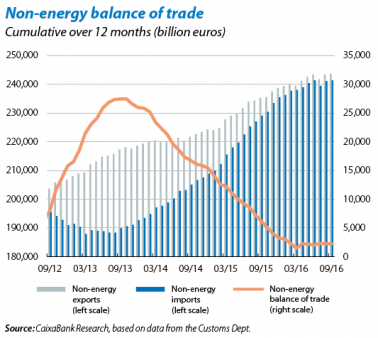 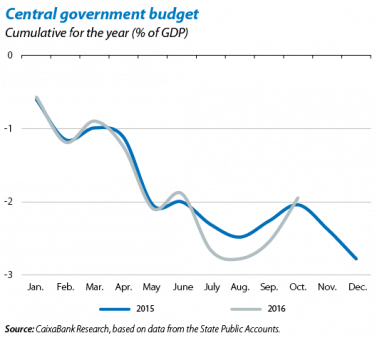 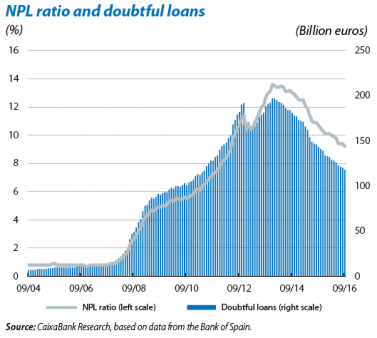