The improvement in Spain’s competitiveness: by sector

Around 70% of the competitiveness lost during these years was due to a higher increase in labour costs in Spain than in its trading partners and the rest to a poorer trend in labour productivity. Focusing on the trend in labour costs, between 2000 and 2011 these rose more in the Spanish economy than in its main trading partners in all sectors. Labour costs in Spanish manufacturing increased by 25% compared with Germany and by 8.8% and a 5.8% compared with France and Italy, respectively. In the construction sector, which is not subject to direct international competition and was enjoying a boom, labour costs grew even more compared with Germany: by 35%. In services this relative increase reached 25%, a deterioration that was offset slightly by the financial sector and especially computing and telecommunications performing slightly better.

The journey back has been equally intense and widespread. According to the OECD, in the five years from 2011 to 2016 relative unit labour costs have returned to the levels achieved in 1998. In this case, 60% of the improvement in competitiveness results from less growth in labour costs in Spain than in its trading partners.

Focusing once again on the trend in Spanish labour costs compared with that of its main rivals, between 2011 and 2016 the improvement has been widespread in all sectors. Specifically, all sectors saw a reduction in their labour costs in relative terms compared with Germany. There has been considerable adjustment in the labour costs of Spain’s manufacturing sector compared to German manufacturing while construction has seen a more modest improvement. Notable in services is the improvement in computing and telecommunications, in finance, and also in education and healthcare.

This recovery in the competitiveness of the Spanish economy helps to explain the good performance of exports. In absolute terms, Spanish exports rose by 240,577 million euros in August (cumulative over the year), 2.7% more than in August 2015. In relative terms, it is worth noting that Spanish exports have maintained their share of world exports while this figure has fallen in most advanced countries. Given these figures, there is no doubt that work must continue to preserve and, as far as possible, improve the competitiveness achieved over the last few years. 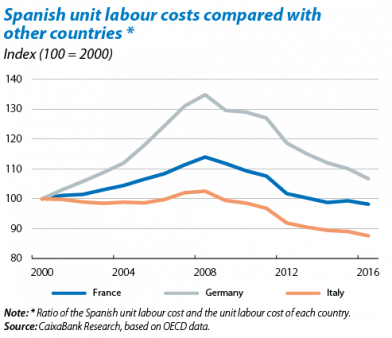 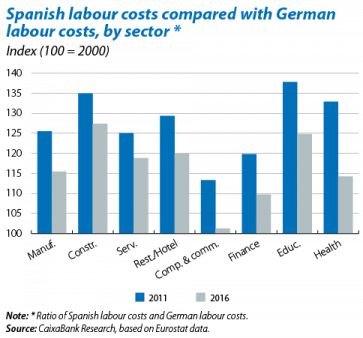