Institutions in Latin America: a watershed

Latin America has been through a genuine institutional revolution in the last few decades that has completely altered the way economic policy is decided. Although formal changes are very often highlighted, such as the evolution towards democratic regimes taking place in the region since the 1980s, from a strictly economic point of view it is more important to look at improvements in different areas of governance which have been shown to affect economic efficiency. The governance indicators developed by the World Bank are particularly useful, providing details on the situation in six key areas: voice and accountability (including, among others aspects, democratic choice of government, freedom of the press and of association), political stability and absence of violence, government effectiveness (including measurements of the quality of public services, public policy, etc.), regulatory quality, rule of law and, lastly, control of corruption.

Although the conventional view is that governance has improved over the last 20 years, it is certainly true that this trend has not been uniform over time. While, between 1996 (first year with data) and 2005, the trend in the average figure for these six indicators is negative, it becomes positive in the following 10 years. Paradoxically, the situation of 2014, the last year available, is almost identical to the one in 1996. However, this institutional stagnation is almost exclusively due to the regression recorded in two countries, Argentina and Venezuela. Eliminating these two atypical cases we can see that, between 1996 and 2014, the region improved in institutional terms, achieving particularly good institutional quality in Chile, Uruguay and Costa Rica. Nonetheless, as a benchmark for the institutional progress achieved, we should note that the levels achieved in the regional average (excluding Argentina and Venezuela) are somewhat better than those of emerging Asia but clearly below the achievements of emerging Europe.

Given that Latin America is now entering a phase of worsening economic prospects due to a twofold economic shock (tougher international financing conditions and lower gains in commodities than those seen in the boom of the first decade of the new millennium) and that its leading economy, Brazil, is suffering from a deep recession, can the region weather the storm better than in the past thanks to the institutional changes occurring in the last few decades?

To answer this question, we need to clarify two issues. The most general issue is whether the region's current institutional framework now makes it more likely to adopt the right economic policy. A second, more specific aspect is related to whether the improved institutional system will assuage the increased likelihood of default since debt has become less sustainable due to a combination of lower growth and tougher financial conditions.1

With regard to the first of these issues, the literature points to strong causal ties between (greater) institutional quality and a (greater) capacity to implement anti-cyclical economic policy. The empirical evidence available that is relevant for Latin America is mixed, however. While the BIS (2012) detects that several emerging economies, including some Latin American ones, have been able to implement counter-cyclical economic policies since 2000, the IMF (2014) is more cautious, noting a slight reduction in the pro-cyclical nature of economic policy.2 The BIS also recognises that progress has been made particularly in monetary policy but not so much in the fiscal area (only Chile stands out in this area).

Regarding the second of the issues mentioned, the literature claims there are causal relationships between (greater) institutional quality and a (lower) probability of default. That is why we expect the latter to be less frequent than in the past.

In summary, Latin America is facing turbulent conditions with a better institutional framework than in the past. However, not all Latin America is Chile or, in other words, this does not mean it will all be plain sailing from now on. Neither is it clear whether the institutional improvement in the rest of the countries is enough, given the approaching storm. 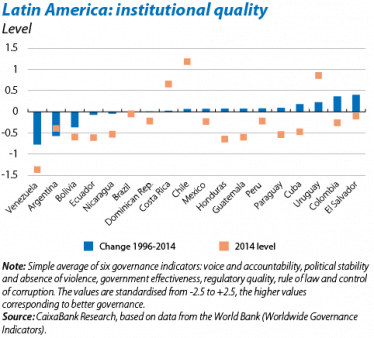