International trade: what lies behind the figure

In the last few decades, the geographical fragmentation of production processes has spread beyond countries' borders, giving rise to «global value chains» (GVCs). There are few cases of goods (or services) produced entirely in a single country. According to the United Nations' figures, intermediate goods and services account for around 60% of international trade, moving from one country to another to become successively integrated within the production processes of other goods or services until reaching the end of the chain (resulting in complex products). The proliferation of GVCs raises doubts as to both the usefulness of classic theoretical models of international trade based on simple goods (produced in a single country and generally with a limited level of fragmentation) as well as the use of «gross» measurements of trade in analysing the situation. One good example is a country's total exports, a widely used indicator of economic activity, which does not, however, identify where the value added of these exports has been created. Neither does the immediate geographical destination of exports of goods in the initial or intermediate stage identify the final geographical destination when these goods reach the end of the chain. This kind of issue is particularly relevant in the euro area at present, where it is vital to apply macro and microeconomic policies that take into account the local creation of value and employment. Unfortunately, the information available is not as complete as we would wish.

The reality is that the world is made up of both simple and complex goods. And it is precisely the increase in the latter that explains some of the patterns observed in trade. In particular, the mere transition towards a world with GVCs led to a sharp rise in flows of exports and imports, higher than the rise in real production. The reason is that goods crossed borders several times within the same production process, each of these times being counted. It therefore comes as no surprise that, over the last few decades, total exports have grown 1.5 to 2 times faster than global GDP. However, trade recently seems to have suffered from a change in trend: after a slump in 2009 and their rapid recovery subsequently, world exports have started to slow up. Some economists put this down to a structural factor: the process of creating new GVCs is coming to an end. However, the fact that this has coincided with a hangover from a widespread economic and financial crisis in a highly connected world (more than ever before) makes it difficult to discern whether this slowdown in trade is a cyclical phenomenon resulting from the crisis or is actually structural. Because, in a world with so many GVCs, economic slowdown can lead to greater problems in trade flows than in a world without GVCs. This is the case when the slowdown is more pronounced in the demand for complex goods than in the demand for simple goods, as the former affect a larger number of trade flows. Moreover, the uneven implementation of GVCs between countries lies behind the notable differences seen in trade flows at a regional level. In general, those countries more connected to global chains will be impacted more by shocks in world demand. Similarly, those countries whose production is more closely related to the initial or intermediate stages of GVCs will tend to experience greater trade fluctuations than those whose production is in the final stages. The reason is the upstream magnification (or bullwhip effect) seen in all supply chains, be they global or otherwise.

In short, the growing complexity of production processes makes it difficult to interpret gross figures on international trade. A combined conceptual and empirical effort is vital to refine economic policies and avoid counterproductive effects when attempting to influence trade flows which are already complicated per se. From a theoretical point of view, the influential work of Grossman and Rossi-Hansberg, which divides the production of a good or service into different tasks, some of which can be offshored, has laid the foundations for new models of trade.1 From a statistical perspective, several initiatives are now underway to take GVCs into account and thereby avoid counting the same trade flow more than once, identifying where value is really created and the final destination of flows and more accurately estimating exports of services.2

2. Of note among recent initiatives are the databases UNCTAD-Eora GVA and OECD-WTO TiVA. 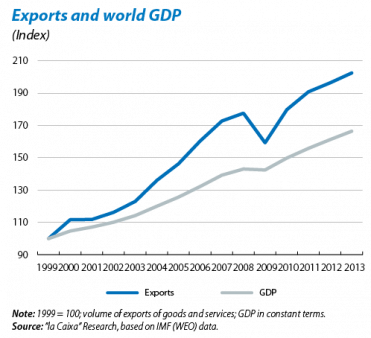