There has been a notable decrease in the public deficit over the last few years. We expect 2013 to end with a figure close to 6.7% of GDP,(1) 4.4 p.p. below the peak reached in 2009. So far, this adjustment has been carried out within a context of economic recession and has therefore required significant effort, which has been acknowledged by the international community, the drop in the risk premium being a good example. From now on, the economic recovery will make this process easier to bear but Spain still faces a considerable challenge. A three-year view of the determining factors for public spending and revenue could help to contextualise the extent of this challenge.

In terms of public expenditure, one of the main factors to take into account is the reduction in unemployment, which we expect to occur thanks to an improvement in economic activity. According to our forecast scenario, this drop in unemployment expenditure could be between 0.7 and 1.0 p.p. of GDP in the next three years. However, as public debt will remain at a high level, the cost of servicing this debt will increase slightly, offsetting part of these savings. Another key factor will be the implementation of public administration reforms. According to government estimates, this could cut public spending by between 1.0% and 1.5% of GDP. Provided the relative share of the rest of the items remains stable, these factors would place public expenditure slightly above 42% of GDP in 2016.

The margin to improve public revenue also seems limited unless fiscal reform drastically improves the efficiency of tax collection or has a significant impact on economic growth. The real estate sector is very unlikely to regain the importance it enjoyed in the years prior to the crisis. Of the 4.5 p.p. decrease in tax revenue between 2006 and 2011, 24% was due to lower revenue from taxes on property conveyance and stamp duty, related to this sector. On the other hand, although the economic recovery will improve tax revenue, if we look at the historical relationship between this and growth in nominal GDP the impact will probably be limited. In general, a 1.0% increase in nominal GDP has resulted in a 1.1% rise in revenue, although this could be slightly higher during periods of recovery such as the present. Consequently, given our medium-term growth scenario, if the current taxation system is maintained, then the relative share of revenue is unlikely to exceed 38% of GDP.

In short, the improved economic context and the measures planned by the government will help fiscal consolidation to continue over the coming years. But there is still a significant challenge ahead and Spain cannot allow itself to become complacent.

(1) Excluding losses due to aid given to the banking sector. 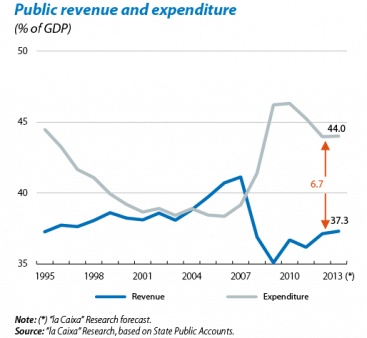 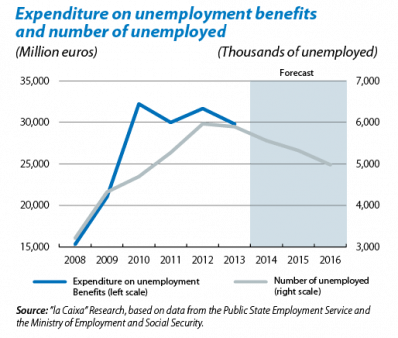 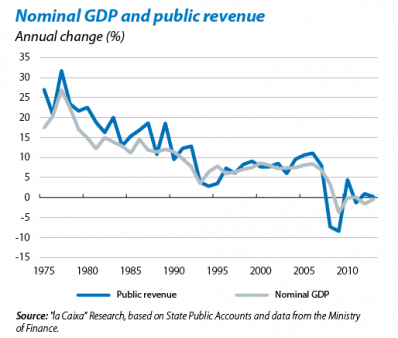