Over the last few months, doubts regarding the health of the periphery countries' public accounts have diminished. The progress made in European governance, the correction of the main imbalances in these countries and the incipient recovery in activity in the euro area as a whole have contributed to this improvement. The risk premium, the star of this crisis, is reflecting this situation with widespread falls. Fears of a possible default in the short term therefore appear to have receded. However, the levels of public debt are still very high, making it impossible to completely dispel doubts regarding whether, sooner or later, further haircuts will have to be applied. Will the periphery countries be able to take their public debt to safer levels?

According to the IMF, on average the periphery countries will end 2013 with a public debt of 129% of GDP, 61 p.p. above the level of 2007. The euro area as a whole is expected to reach a level of 96% of GDP, an increase of 29 p.p. Given this scenario, adjustment towards less strained levels is practically an obligation for periphery governments. A country's public debt is usually expressed as a percentage of GDP, indicating its capacity to repay. There are therefore only two ways to dispel all doubts: either by reducing the numerator, mainly through primary fiscal surpluses (the fiscal balance before including interest payments); or by increasing the denominator via growth in nominal GDP.(1) Let us therefore look at each factor in turn.

According to the IMF's macroeconomic scenario, GDP growth will be the factor that will contribute the most to reducing the public debt ratio, especially in Greece and Ireland (see the above diagram). Greece is the country most expected to reduce its sovereign debt between 2013 and 2018, specifically by 35.1 p.p. However, this will still be at a level clearly above that of the rest of the periphery countries. For their part, these will undergo relatively more moderate deleveraging during this period. In fact, Spain's public debt is even expected to go on rising.

Such meagre adjustment is the result of the fiscal deficits that, according to the IMF's forecasts, periphery countries will continue to record over the coming years. The primary balance will not be enough to offset the high burden entailed by interest payments on public debt. On average, according to IMF figures, these countries will allocate 4.6% of their annual GDP to meet the obligations generated by their debt, a figure that is more than one percentage point higher than payments made before the outbreak of the recession (3.4% of GDP between 2000 and 2005). The economies with the highest level of public debt are those that must dedicate the largest share of their resources to paying interest. For example, in Italy and in Greece, the annual financial burden will reach 5.5% and 5.0% of GDP respectively over the next five years. However, this will be much less in the case of Spain, namely 3.8% of GDP over the same period.

To determine the likelihood of possible deviations in the trend forecast for public debt, we need to analyse the supposed underlying determining factors (see the table below). In general, growth forecasts for Greece, Italy and Portugal are similar to those from the pre-crisis period and, given that these countries are expected to carry out significant structural reforms, appear to be conservative assumptions. For Ireland, the IMF predicts much less growth capacity than the one shown during pre-crisis years but this would still be clearly higher than the growth forecast for the euro area as a whole (namely 1.6%). Spain, however, is expected to have the lowest growth rate of all the periphery countries and clearly below the rate forecast for the euro area. This is surprising given that, among the periphery countries, it is the one that has best withstood the buffeting of the crisis and one of the countries with most gains in competitiveness so far.

Public deficit forecasts are not free from controversy either: the difference between the IMF's confidence in the capacity of Greece, Portugal, Ireland and Italy to correct their public deficit and its uncertainty whether Spain can do the same is surprising, particularly when the achievements so far do not seem to justify this. For example: the adjustment in the structural deficit has been similar over the last few years. Lastly, it is important to note that the average interest rate assumed for all the countries is clearly lower than the one observed during the pre-crisis years. A projection whose accuracy is largely subject to the ECB maintaining a low interest rate policy over a prolonged period of time. For the case of Greece and Portugal, moreover, it is important to remember that they will no longer be under the protection of an aid programme and are therefore unlikely to maintain a lower interest rate than the rest of the countries. In fact, once they return to the finance markets in the coming years, and as the debt financed via the troika matures, the average interest rate for these countries is likely to rise to a level above that of Spain, Ireland or Italy.

In general, and by way of conclusion, Greece, Ireland, Portugal and Italy are very unlikely to surprise us by correcting their public debt more quickly than the IMF's forecast. In Spain, however, according to the forecasts of "la Caixa" Research, the peak will be reached earlier than predicted by the IMF and at a somewhat lower level. In any case, it seems quite clear that all the periphery countries will have a high level of public debt when the next recession arrives. When this time comes, these countries must have proved themselves unquestionably capable of correcting debt. Only then will they be able to adopt fiscal measures that cushion the recession's impact without raising doubts as to the sustainability of their public debt.

(1) Another aspect that could influence debt trends are stock-flow adjustments; i.e. those accounting entries that modify public debt without affecting the deficit. One example is issuing public debt to finance the lines of credit provided to firms by the Official Credit Institute (ICO). In this case, the increase in debt is used to acquire assets and not to cover current spending. 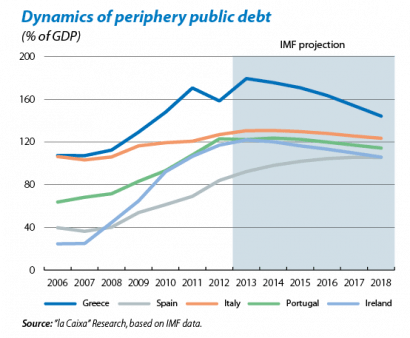 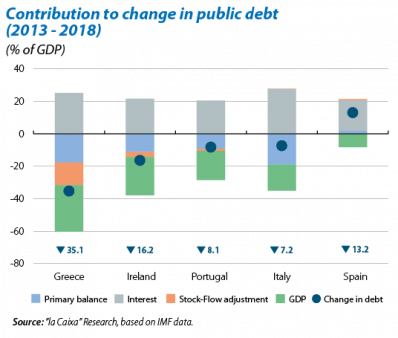