Spain's financial system is characterized by its great capacity to generate recurrent earnings but this capacity has decreased significantly over the last two years. For example, the system's pre-provision income (operating margin), which should be enough to sustain doubtful loans and also to provide returns on capital, has fallen by 26% compared with the peaks reached in 2007-2009. In the future, will it be possible to make enough profit to provide the necessary provisions and returns on equity so that we can generate and attract the necessary capital to meet the new requirements of the market and the new Basel III regulations? Which instruments can be used by institutions to improve their profits in such a difficult context as the present?

The following graphs show how, over the last few years, loan loss provisions have been consuming an increasing share of the operating margin and, consequently, the RoE has been falling to minimum levels (2.9%, in September), clearly below the cost of the capital, estimated at around 10%-12%.

As this element has a high correlation with the economic cycle, and given the forecasts of high unemployment rates, we expect both the NPL ratio and foreclosures to remain at a very high level in the immediate future, with the current high volume of provisions having to be maintained as a result. It will be more in the long term, with economic recovery, when we will return to risk cost levels (provisions/credit) closer to the historical average (0.27% during 1981-2008), far removed from the current figure of 1.2%, which means that 68% of the operating margin has to be allocated to provisions.

On the other hand, the trend in the RoE shows us that returns on capital are insufficient; in fact, this would still be the case at the average risk cost of the cycle and not the current high cost. These low returns are particularly worrying at present, given that Basel III requires capital to be generated internally and to be attracted, and this will only be possible by offering sufficiently enticing returns on equity.

But how can the operating margin be increased, allowing the necessary improvement in the return on capital? Let's look at the main components of this margin and their prospects.

We can see that the interest margin accounts for more than 52% of the gross margin, extensively affecting the operating margin as a whole since operating costs (essentially personnel) are quite stable. This interest margin is expected to shrink by a further 10% in 2012 and only grow slightly in 2013, there being several factors behind this new contraction in the short term.

Firstly, economic agents have now started the inevitable deleveraging process, considerably reducing their demand for credit. This factor, together with the scarcity and high cost of liabilities for institutions, reduces the amount of new credit being granted. This fall in demand has yet to come to an end, it is a structural (and not only temporary) factor that will lower the volume of business and therefore the interest margin of the system for some time.

In addition, official interest rates will remain low. This will hurt institutions' interest margin as they normally benefit from high interest rates thanks to the rigidity of the cost of current and saving accounts.

On the other hand, the cost of other liabilities will remain unusually high. The causes: the large number of maturities faced by institutions in 2012 (120 billion euros) and their difficulty in accessing wholesale funding markets, so that competition to attract retail banking deposits will still remain and at very high prices.

Moreover, in addition to competition between institutions, over the last few months there has also been competition from the public sector: the high interest rates for the last government bond auctions has led to some deposits from the banking sector to be moved to public debt products, forcing institutions to offer high yields to be able to compete with these products.

As a consequence of the competition between banks, and between banks and the public sector, in many cases the interest rates offered are higher than the yield obtained by institutions from their loans, resulting in a situation that is unsustainable in the medium and long term.

Within this difficult context, measures to support banking, implemented by the European Central Bank, could be of great assistance: unlimited liquidity at a lower interest rate and a lower cash ratio reduce financial costs and release assets that can be used to generate profit. However, this source of funding has traditionally been considered as a last resort and with a certain cost in terms of reputation, so that institutions prefer not to use it too much.

Lastly, as has already been mentioned, banks have a large volume of doubtful and foreclosed loans which currently account for 11% of credit to private resident sectors. These assets damage the income statement twofold since, in addition to having to provide for them, they also negatively affect the interest margin as they are assets that still need to be financed but that do not generate financial income.

For all these reasons, the current conditions do not point towards any immediate improvement in the interest margin. Other means must be used to increase profitability. The first could be to widen the spreads for new loans, adjusting them to the new cost of liabilities, to the risk cost, which had been underestimated, and to the liquidity cost. However, this measure's impact is lessened by the weak demand for credit at present and would be significant only in the long term.

On the other hand, reducing the excessive cost of liabilities requires a solution to the debt crisis, something which would facilitate access to wholesale funding markets and thereby relax liquidity tensions, putting an end to the deposit war.

The second option to improve profitability is by raising the commissions charged, bringing prices closer to costs. However, this measure is difficult to implement within an environment of great competition and price sensitivity on the part of consumers.

Other sources of revenue, such as dividends and profit from equity accounting investee firms, depend on the results of these firms and on such investment in them continuing. On the other hand, treasury profits, the main component of the trading business profit, are highly volatile and do not constitute a stable source of profit.

This difficulty in improving revenue has forced many institutions to cut costs. Significant structural adjustments have already been made to reduce excess installed capacity: between 2008 and 2011, the number of employees and branches fell by 10% and 13%, respectively. But there is a time lapse between measures being adopted and their impact on profits. Consequently, as of September 2011, in savings banks, which have carried out the greatest adjustments, operating costs had fallen by just 2.3% year-on-year, while the gross margin (before personnel costs and provisions) was down 27.7%. The adjustments carried out will have more impact once all the synergies of the mergers have materialized, although adjustments to the cost structure are bound to continue, either by reducing unit costs or capacity (via greater concentration in the sector).

Given this overall context, the situation between institutions is highly varied, in terms of the trends in profits, the adjustments carried out and problematic assets, as well as in terms of liquidity tensions that are encouraging banks to incur excessive costs in attracting funds or to be more conservative in granting credit. At an individual level, institutions will probably have to take action along the lines of one or more of these measures. But generating more revenue by increasing market share is also a valid and necessary option: more and better customer service, innovation and the constant search for additional business opportunities will help them tackle the current predicament and come out the other side much stronger.

This box was prepared by Matthias Bulach and Inmaculada Martínez Carrascal 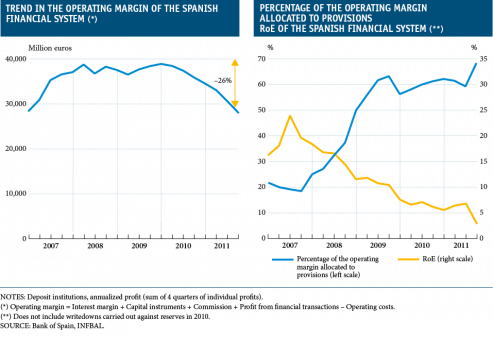 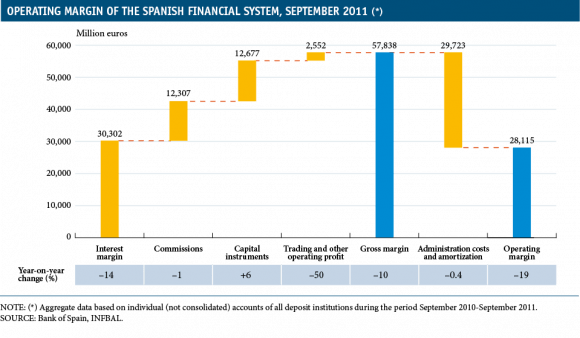