Prospects of improvement after the first quarter's setback

The US and China recover while disparity reigns supreme among the rest of the countries. The latest indicators for the two large engines of the world's economy point to improvement for the rest of the year. The US economy is starting to build up steam with the recovery in the labour market playing a key role. In China the slowdown seems to have stopped and, moreover, the government has taken various measures to put a stop to the risks hovering over the country and ensure its official growth target is achieved. Meanwhile disparity reigns supreme in the rest of the world's economies: Japan is being affected by its VAT hike; India and Indonesia are starting to correct their imbalances while Brazil is still mired in mediocrity.

The US economy is on the up again after a Q1 that was hit harder by the adverse weather conditions than initially calculated. The GDP flash estimate for 2014 Q1 was actually revised downwards from 2.3% year-on-year to 2.0% (from 0.1% annualised quarter-on-quarter to –1.0%). This revision is entirely due to the downward revision in inventories, so that the final demand figure remained the same, and has positive implications for the next three quarters. In fact, the outlook provided by the extensive battery of indicators announced in May is positive, especially most of the indicators of business sentiment and consumer confidence. April's ISM for manufacturing rose to 54.9 points from March's 53.7; its equivalent for services also improved in April (up to 55.2 points from March's 53.1) and the increase in the PMI for manufacturing in May, produced by Markit, brought it to 56.2 points from April's 55.4. Along the same lines, May's consumer confidence index by the Conference Board rose to 83.0 points, supported by an improvement both in the component that rates the current situation as well as the one taking future prospects into account. However, retail sales disappointed (+0.1% month-on-month in April) as well as industrial production
(–0.6% month-on-month in April).

The housing market continues to recover, albeit moderately. The Case-Shiller price index for 20 large metropolitan areas rose by 12.4% in March compared with the same month last year. Since the beginning of 2014, the rate of growth in prices has eased. Undoubtedly, the adverse weather conditions in 2014 Q1, mortgage rates 1 p.p. higher than last year and tougher conditions for getting a loan all lie behind a large part of this slowdown. Nonetheless, some of the latest indicators of real estate point to the sector maintaining a good level of activity in 2014 Q2. In particular, sales of second hand homes grew in April for the first time this year so far and house starts rose significantly (+13.2%).

The labour market continues to improve albeit with some exceptions. April once again provided surprisingly good employment figures: 288,000 jobs created, a much higher figure than the monthly average for the winter months (150,000). The unemployment rate also fell by 0.4 percentage points to 6.3%. However, this good news was somewhat overshadowed by the drop in the participation rate (from March's 63.2% to 62.8% in April), which might be pointing to a further upswing in the dejection effect on the unemployed. Given this gradual but still incomplete recovery, the Fed has decided to remove its numerical target of 6.5% for the unemployment rate in its monetary forward guidance. Wages at a standstill in April confirm this slack view of the labour market. Nonetheless, it is important to keep an eye on signs that might be hinting at a change in trend (such as the business surveys on expectations of wage increases, which are already pointing to increases).

Inflation is rising but is still far from showing any worrying signs of tension, allowing monetary normalisation to follow a slow course. April's CPI rose by 2.0% year-on-year, faster than March's rate of 1.5% but still at a low level. For its part, the core CPI (without energy or foods) stood at 1.8% year-on-year compared with 1.6% for the previous month. For the time being, we cannot see any inflationary pressures either in the trend in prices or in agent expectations. Our central scenario predicts an average inflation of 1.7% in 2014 and 1.8% year-on-year at the end of year.

Growth has come as a pleasant surprise in Q1 of the year, attributable to expenditure being brought forward due to the VAT hike on 1 April. Japan's GDP advanced by 1.5% quarter-on-quarter (2.7% year-on-year), much more than the 0.1% of the previous quarter (2.5% year-on-year), boosted by private consumption and capital goods investment with purchases being brought forward to avoid higher prices after the hike. The temporary nature of this push means that we have only marginally revised our forecast for 2014 (up 0.1 percentage points to 1.4%). The growth for 2013 has also been revised upwards (to 1.6%).

Almost all recent indicators have been distorted by the VAT hike, similar to the effect seen in GDP. Consequently, we will have to wait a few months before being able to assess its definitive impact. For example, the Japanese economy reduced its trade deficit April, to a large extent because of the slowdown in imports whose demand had increased in the previous months. Although exports also contributed to this correction (+3.7% year-on-year), their growth continues to be paltry. In this respect, the yen's weak capacity to stimulate exports still comes as some surprise and is a cause for concern, as they are still 18% below the level at the end of 2007.

Within such an environment, prices unexpectedly rose in April. This could delay the application of additional expansionary measures by the central bank, which we had forecast for the beginning of summer. April's CPI increased by 3.4% year-on-year, an abnormally high figure when compared with March's year-on-year figure of 1.6%. The effect of April's VAT hike is also key here although the rise is higher than consensus estimates, which had already taken this effect into account. For its part, core inflation (without energy or foods) advanced by 2.2% year-on-year.

In China, the latest activity indicators support the forecast of significant growth, namely 7.5% in 2014. The foreign sector came as a nice surprise with exports growing by 0.9% year-on-year in April after two months of year-on-year falls. These figures may seem very poor compared with the 7.9% growth recorded in 2013 but we should remember that, in the first four months of 2013, export figures were abnormally high due to temporary factors (over-invoicing), overshadowing this year's figures. For its part, the PMI flash index for manufacturing, produced by Markit, rose to 49.7 points, its highest level in the last five months. The increase was particularly large in exports, confirming the improvement seen in April's exports according to the balance of payments. The government has not hesitated to implement various anti-cyclical economic measures: in the fiscal area (increasing the «mini-stimuli» announced in April) and monetary (injecting liquidity and lowering the cash reserve ratio), among others.

The disparity of fortunes among the other large emerging countries is confirmed. On a positive note, India and Indonesia are making progress with correcting their imbalances (current account deficit and inflation). Given this situation, Indonesia grew less than expected in 2014 Q1, 5.2% year-on-year, its lowest rate in five years. However, the government veto on mining exports with the aim of prioritising local manufacturing explains this moderation at the start of the year. For its part, Narendra Modi's ample electoral victory in India has been very well received by the markets and could be crucial in carrying out inclusive reforms for the country. In Latin America, Mexico and Brazil posted weak growth figures for Q1. Specifically, Mexico grew by 1.8% year-on-year, below consensus expectations which had placed growth at 2.0%. Two factors lie behind this lower figure: the slowdown in the US economy in Q1 and the country's tax hike. However, contained imbalances and a recovery in the US economy support reasonable prospects for the region's second economy (2.9% in 2014). On the other hand, Brazil advanced by 1.9% year-on-year compared with 2.2% the previous quarter. In this case growth prospects are less favourable, especially given inflationary tensions that refuse to go away. In spite of these tensions, the central bank decided not to take any action at its last meeting, leaving the SELIC rate at 11%. 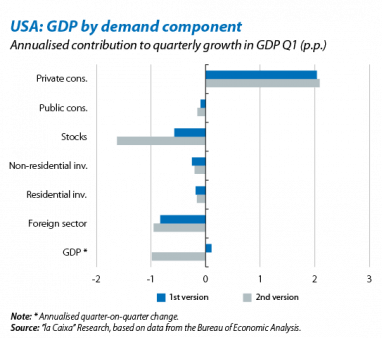 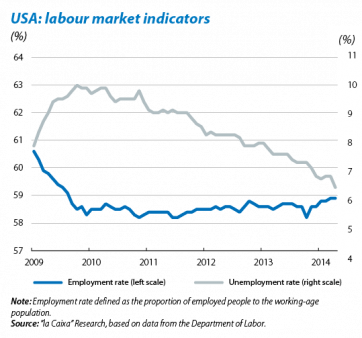 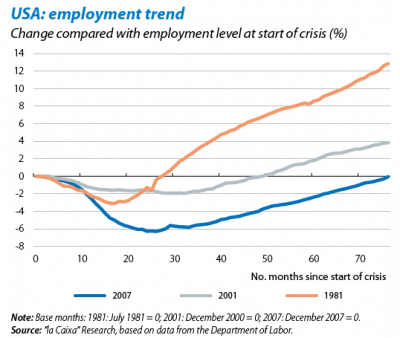 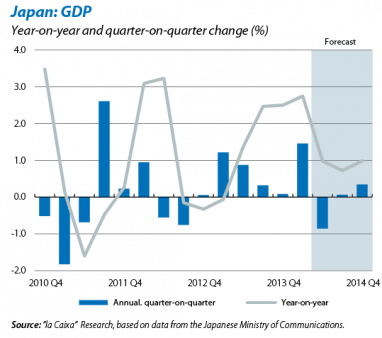 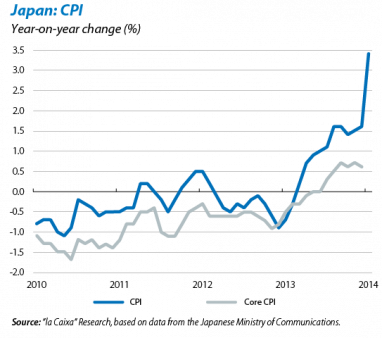