The recovery is consolidating in spite of the geopolitical risks

The world economy is weathering the geopolitical uncertainty. In spite of the escalation in armed conflicts (Ukraine, Iraq and Gaza), the macroeconomic figures published during the summer confirm that the world economy is still on its expected course of growth becoming gradually stronger, although there are several different situations within this overall trend. The US is speeding up but Japan has suffered more than expected from its VAT hike while, among the emerging economies, China is holding firm and inflationary imbalances are easing in the rest of Asia.

The economy steps up its pace in Q2. The US grew by 4.2% in Q2 in annualised quarter-on-quarter terms (2.5% year-on-year), a figure that contrasts with the decline of 2.1% annualised quarter-on-quarter in Q1. This growth is larger than expected, due basically to improved consumption and investment, as well as the upswing in stocks. The historical GDP series has also been revised and, as a result, 2012's growth is lower (2.3% compared with 2.8% previously) but 2013's figure has increased (2.2% compared with 1.9% previously). Taken as a whole, the data from the US National Accounts system show a pattern of growth in which domestic demand is steadily getting stronger.

In Q3 this expansion has not lost steam, as shown by the good ISM activity indicators, both for services and manufacturing, which rose in July. This trend suggests that investment will continue to perform well and the dynamic pace of consumption also seems sustainable, thanks to July's and particularly August's notable improvements in consumer confidence. After the increase of the last few months, this indicator has reached values not observed since before the crisis (specifically its highest figure since November 2007). One last figure certifying the vigorous start to Q3 is industrial production which, after growing by 4.1% year-on-year in Q2 has speeded up to 5.0% in July.

The real estate market eases off. After a relatively positive May in terms of the real estate market, June and July posted somewhat weaker figures. After falling by 7% in June, new house sales were down again in July (–2.4%). The figures for second-hand home sales were slightly better, seeing moderate but positive growth in June and July (2.4%). Neither is the trend in property prices helping to completely resolve the doubts surrounding the sector. In June, the Case-Shiller 20-City Composite Home Price Index increased by 8.1% year-on-year, a slowdown of 1.2 percentage points compared with May. As there currently seems to be something of a slowdown in the market, should we conclude that the recovery in real estate has come to a halt? An overall diagnosis based on the above data is that the market is still recovering but at a slower rate than expected. Nonetheless, and as suggested by the strong upswing in housing starts recorded in Q2 and in July, the underlying trend is still expansionary.

Stable inflation. One favourable element within the current economic situation is the trend in prices, these remaining contained considering the strength of the recovery. After the upswing in the CPI in Q1, since April inflation has been growing year-on-year by around 2%, both its general index and also after discounting the more volatile components of energy and foods. Specifically, in July the CPI stood at 2.0% in year-on-year terms and the core CPI (without energy or foods) at 1.9%. Given this situation, the growth in prices remains within the range set by the Federal Reserve. Specifically, July's deflator for personal consumption expenditure (PCE) stood at 1.6% year-on-year, below the Fed's 2.0% limit. Our forecasts predict this 2% growth rate for prices will not speed up significantly over the coming quarters.

The labour market looks quite healthy. Employment figures continue to confirm the labour market is still on the road to recovery. 209,000 jobs were created in July, exceeding the level of 200,000 for the sixth month in a row, indicating a strong labour market. Although the unemployment rate rose slightly to 6.2%, the participation rate improved to 62.9%. In spite of stronger employment, the growth in wages is still moderate. Taken as a whole, the labour figures point to two equally true situations: the recent trend is one of evident expansion in employment but the recovery is far from complete (as shown by the still low participation rate). Given that labour's performance is a fundamental indicator for establishing the future path of monetary normalisation, how the Fed interprets these somewhat conflicting developments will be crucial over the coming months.

VAT hinders growth in Q2. April's VAT hike, which raised the tax to 8% from its previous rate of 5%, led to the biggest drop in GDP since the earthquake in 2011. Specifically, Japan's GDP fell by 1.7% quarter-on-quarter in Q2 (a year-on-year change of 0%). Although this tax hike was expected to cause an economic setback, its negative impact on private consumption and investment was greater than predicted. If we look at the trend in activity for the first six months as a whole, we can see that GDP fell slightly during this period (note that, in Q1, there was a sharp upswing in GDP due to economic agents bringing expenditure forward to avoid the proposed tax hike). We will have to wait until Q3 to properly evaluate the outcome of this negative impact on the Japanese economy's underlying trend. This analysis will also be important because it will affect the decision of whether to carry out a further VAT hike in October 2015, a measure that has already been announced but not officially adopted.

Inflation starts to digest the effect of VAT. In July the CPI rose by 3.4% year-on-year, less than the figure of 3.6% in June, while the core CPI (not including food or energy) remained the same at 2.3%. Given how important it is for Japan to consolidate its gradual exit from deflation, it is important to determine the price trend without the distorting effect of the VAT hike. According to some estimates, July's CPI would have grown by around 1.4% year-on-year, similar to the rates before April. This indicates that the exit from deflation beginning in mid-2013 is still on track. This is an important support for the recovery, in addition to other factors such as the increase in corporate earnings and positive export figures in the summer (although this last factor may be rather more circumstantial, considering their poor performance in previous months).

China speeds up in Q2 and then slows down a little. When a slowdown was feared in Q2, the Chinese economy surprised by growing 7.5%, more than the 7.4% achieved in Q1 and consensus forecasts. This good performance has depended basically on investment, the main beneficiary of the government's expansionary policy, as well as the foreign sector. On the other hand, the contribution made by private consumption has been less than in Q1, a reminder that the rebalancing towards greater household spending will be slow. In slight contrast, early indicators for Q3 tend to be more contained, with the important exception of exports which picked up again in July.

Disparate growth in the rest of the emerging economies. Q2 growth figures confirm that activity is performing differently depending on the country in question. The situations of India and Brazil contrast particularly among
the main emerging economies. In Q2, while the Asian giant surprised with year-on-year growth of 5.7% (4.6% in Q1), Brazil slumped to 0.6% quarter-on-quarter (–0.9% year-on-year) and has slid into its first technical recession (a decline in GDP for two consecutive quarters) since the Great Recession of 2008-2009.

Attention is still focused on correcting imbalances. Brazil exemplifies the difficulties faced by some emerging countries to both sustain activity and correct macroeconomic imbalances at the same time (inflation or current deficit, principally). This is also Turkey's situation, whose activity is slowing down (albeit not to the extent of Brazil's) at the same time as inflation rose to 9.3% year-on-year in July and with a 7.5% current deficit in Q1. Another country with similar problems is Russia, suffering from rising prices (7.4% inflation in July) and a deteriorating outlook for activity (aggravated by the Ukrainian conflict). The other side of the coin is provided by the emerging Asian countries that are successfully combating inflation, as shown by the slowdown in July's CPI in both India and Indonesia. 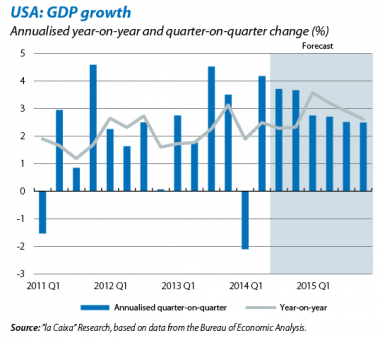 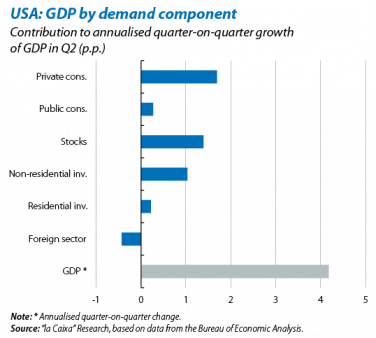 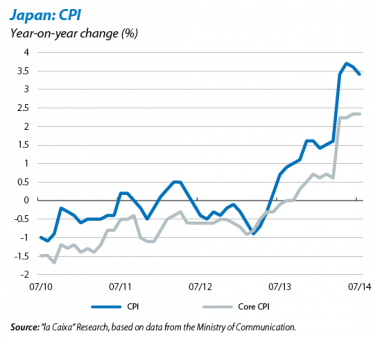 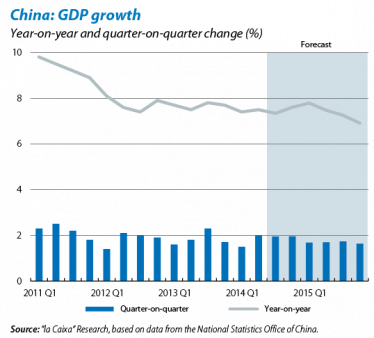 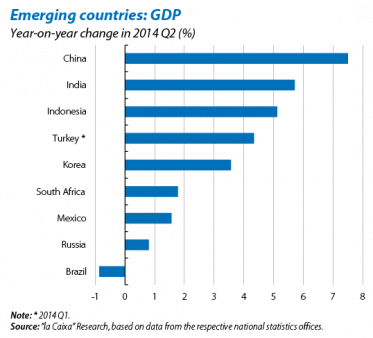