The recovery continues although the rate of growth is falling

The CaixaBank Research activity indicator estimates that the rate of growth slowed down slightly in Q3. GDP growth was particularly strong in the first two quarters of the year thanks to temporary support factors such as the euro's depreciation, the relaxation of fiscal policy and especially cheaper oil, which have notably benefitted the Spanish economy. It was to be expected that, as the impact of these supports has gradually diminished, the rate of growth would be slightly slower. This is reflected in the CaixaBank Research activity indicator which places GDP growth in Q3 in line with the Bank of Spain forecast (0.8% quarter-on-quarter), a slightly lower figure than in Q2 (1.0% quarter-on-quarter). In any case the recovery in fundamental factors such as the revival in credit and in the real estate sector suggests that growth will remain above 2% in the medium term. We also expect the slowdown to be more moderate than forecasted before the summer thanks to the positive effect of a further drop in oil prices. We have revised upwards our growth forecast for 2016, from 2.6% to 2.7% (and have kept our forecast for 2015 unchanged at 3.1%). Nonetheless, given recent events the risks surrounding these projections are slightly downward. On the domestic front Spain's risk premium has risen since mid-July and is now higher than Italy's. Given the absence of any other fundamental economic factors, this increase can be attributed to the uncertainty caused by the country's elections at the end of 2015. The external environment might also be somewhat less favourable due to a sharper slowdown in the emerging economies than initially expected and the impact this might have on the euro area's recovery.

The labour market continues to recover but is losing some of its steam. In line with the gentle slowdown in activity, the number of registered workers affiliated to Social Security, seasonally adjusted, fell slightly in August (–13,980) after a July that posted slightly weaker data (10,500) compared to the average recorded between January and June (57,311). A large part of the drop in summer months can be explained by the smaller contribution from public administration after the sharp increases seen in the first half of the year. Consequently the year-on-year rate of change slowed down to 3.2% in August, albeit still a high figure. Moreover the dynamism shown by branches of activity related to the market economy, together with the significant improvement in expectations for job creation in September, both in services and industry, point to the labour market continuing to recover satisfactorily in the last part of the year.

The savings capacity of households is gradually recovering. The strong growth in private consumption in Q2 (3.5% year-on-year) was compatible with an increase in gross household savings (3.2% year-on-year), with the result that the savings rate remained almost stable at 9.3% of gross disposable income. This situation, which allows households to increase their consumption without reducing their savings capacity, is the result of higher wage income (2.9% year-on-year), in turn supported by the recovery in the labour market. The drop in oil prices is also helping households to maintain their purchasing power within an environment of wage containment, as the energy bill has fallen substantially and inflation is at a very low level.

This scenario of a slump in oil prices is leading to a significant downward revision for inflation. In September inflation plummeted to –0.9%, a drop of 0.5 pps compared with the previous month's figure and essentially due to the decline in the price of fuels and electricity. For its part core inflation fell by 0.1 pps in August (from 0.8% to 0.7%), due particularly to the reduction in transport prices, closely linked to the trend in oil prices. This new scenario for the price of crude has forced us to substantially revise downwards our inflation forecasts, both for this year and the next.

The external balance is benefitting from lower crude prices. Goods exports accumulated 5.5% growth from January to July compared with the same period in 2014, boosted by the automobile industry. The tourism sector is also continuing to provide good news: for the year to date, 47.2 million international tourists have come to Spain, 1.8 million more than in 2014. The sharp drop in tourists from Russia has been more than offset by the significant increase in the number of tourists from France, the US, and Asia. The growth in goods imports remained subdued (4.5% cumulative from January to July) largely thanks to the fall in energy imports (–28.4% cumulative from January to July). For the third year running the drop in oil prices will help Spain to end the year with a current account surplus, which we expect to be around 1.7% of GDP. This is vitally important in order to reduce the economy's high level of external debt. The most recent figures, corresponding to Q2, show that the net international investment position stood at 91.1% of GDP, 4.9 pps less than in 2014 Q2 but still far above the 35% threshold set by the European Commission as a sustainable level.

The public accounts are improving thanks to higher tax revenue in a favourable economic environment. The deficit accumulated by public administrations (excluding local government corporations) up to July was 3.3% of GDP, 0.5 pps below the figure posted in 2014 although the adjustment that is being carried out will surely not be enough to achieve the target by the end of the year. This improvement is supported by the notable increase in tax revenue (+4.2% between January and July) and less so by the reduction in the total spending, which is rather moderate as the drop in spending on interest (–1.1%) and unemployment benefit (–17.6%) has been almost totally made up by the increase in other items such as employees' wages (+2.0%) and pension expenditure (+3.8%). It therefore seems that the margin provided by the improvement in economic activity is being used to increase discretionary expenditure (see the Focus «Spain's 2016 Budget: from structural to cyclical adjustment» in this Monthly Report). By administration, both the central government and the Autonomous Communities have improved on their figures from last year while the Social Security deficit has deteriorated again. Regarding this last aspect, the government has proposed that some pensions (such as those for widows and orphans) that are currently financed as contributory pensions should become non-contributory and financed via the Government budget.

The recovery in the real estate market steps up. After eight years of contraction, house prices (appraisal values) grew again in Q2 (1.2% year-on-year). The house price index produced by the INE, based on transaction figures, also posted considerable growth in Q2 (4.0% year-on-year). These figures were higher than expected and denote that, after years with a very low level of activity in construction, the availability of housing for sale in some zones might become limited although, on the whole, the stock of empty residential properties is still very high. The relaxation of financial conditions is also playing an important role in the sector's recovery. In July, the mortgages granted to buy residential properties rose by 22.7% year-on-year, providing a key support for demand (house sales grew by 10.9% year-on-year in the same month, cumulative over 12 months).

Credit is adding to the recovery. In July the rate of reduction in total credit fell to –5.4% year-on-year, suggesting the adjustment in the outstanding credit balance is coming close to completion. Some segments already posted positive year-on-year growth figures in Q2 such as loans to the services sector and agriculture. However, the outstanding balance of credit to developers and construction, precisely those segments where most doubtful assets are concentrated, is still contracting by double digit figures. With regard to deposits, July maintained the trend seen in previous months with a strong shift from term to sight and a slight reduction in the total balance due to the increase in fund subscriptions, which is expected to ease due to increasing volatility in financial markets over the last few weeks.

The revision of the accounting series for GDP reveals the recession was deeper than previously thought. According to the latest data published by the INE, GDP fell by 3.9% cumulative between 2011 and 2014 and not by 2.5% as had been estimated previously. The growth figure for 2014 was not altered and is still 1.4% but its breakdown is very different: a lower contribution by domestic demand (1.6 pps compared with 2.2 pps previously) was offset by a smaller negative contribution by foreign demand (–0.2 pps compared with –0.8 pps previously). However, GDP was revised substantially downwards in 2011, 2012 and 2013, fundamentally as a consequence of a larger fall in private consumption. If we compare the 2014 level with the peak reached before the crisis in 2008, GDP is 7.3% lower (instead of the 6% estimated previously) and private consumption, 11.0% (instead of 8.2%). 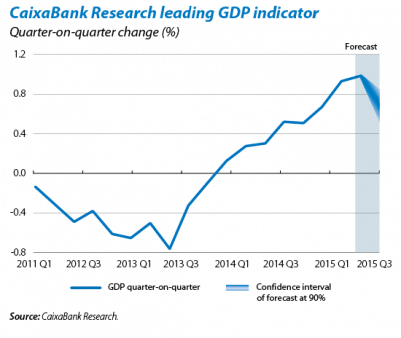 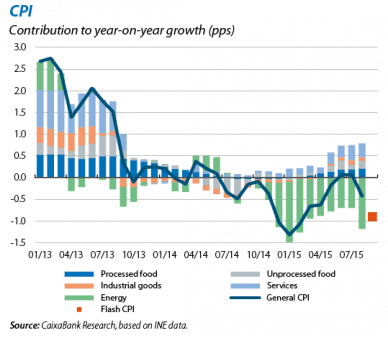 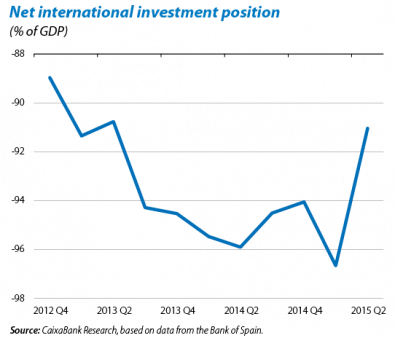 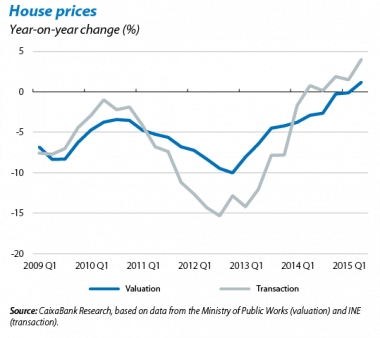 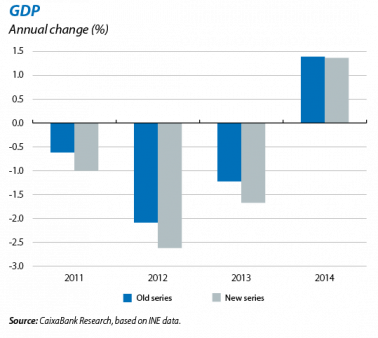