The rise in exports of non-tourism services

The good trend in service exports is one of the factors behind the improvement seen in the current account balance in the last few years. Although it is true that tourism has been a key factor, the role played by exports of the rest of services, which we will look at here, has also been notable.

Since 2003 exports of services not related to tourism have almost doubled, thereby increasing their share in service exports overall. The trend in the ICT sector has been particularly positive, increasing threefold, as well as business services such as consultancy and R&D. These sectors, together with those related to transport, accounted for more than 80% of the exports of non-tourism services in 2015 (see the first graph). Business services have done particularly well compared with other countries: according to a report by the European Federation of Management Consulting Associations (FEACO),1 Spanish consultancies provide the largest percentage of their services abroad; 30% compared with 8% by Italy and France and 19% by the UK, mainly for services provided in Latin America.

Company size is another of the key factors behind exports of non-tourism services, as it also happens in industry. In the case of services, factors such as reputation, vital in order to be competitive in the international market, are usually associated with larger firms. The evidence in this area is overwhelming: in the sub-sectors of the more export-intense services, the share of companies with over 100 workers is 80% higher than in the rest of the sectors.4

The companies that are leading this rise in exports of non-tourism services are therefore larger in size and more productive. Given such characteristics it comes as no surprise that the impact this phenomenon is having on the labour market is clearly positive. As can be seen in the second graph, in those sectors where export intensity is the highest, the average wage for workers is also higher.

In summary, the Spanish economy has been able to boost exports of non-tourism services in the last few years. It would be beneficial for this good trend to consolidate in the coming years, both due to the need to correct the country's external imbalance and also due to the positive effects it has on Spain's labour market.

2. Productivity is defined as value added at factor cost per employee.

3. Export intensity is defined as sales outside Spain compared with total sales. 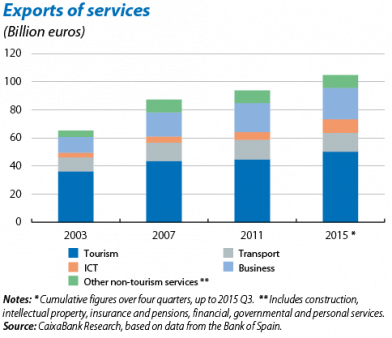 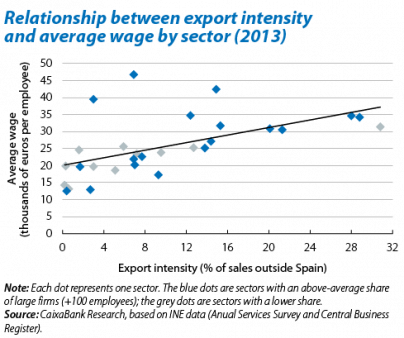