The rise of the international insurance market

In the last few decades, the world's insurance industry, which already handles around 23 trillion dollars in assets, has undergone an unprecedented expansion. In 2010 it totalled no less than 4.3 trillion in premiums, almost 80% more than in 2000, thanks primarily to the dynamism of the life segment and the growing contribution of emerging markets, whose total premiums increased by more than 150% (in real terms) throughout this period. In 2010 alone, it grew by 11%, with Asia and Latin America contributing the most, up by 19% and 8% respectively, compared with 1.4% in industrialized countries.

Nevertheless, insurance penetration, measured as the ratio of total premiums over gross domestic product (GDP), is still very modest in these emerging markets: 3% compared with 8.7% in advanced countries in 2010. This is also the case of insurance density, measured in premiums per capita: 111 dollars versus 3,527 dollars per year in advanced countries in 2010. These figures suggest that there is a huge potential in emerging economies. But which factors might help to realize this potential?

Essentially, the factors fostering insurance market development vary by segment: life versus non-life. However, in general, their development is closely linked to the fundamentals of the real economy and particularly to the average income level. As illustrated in the graph below, the relationship between income and insurance density is markedly positive. The greater the income level, the higher the insurance density. Consequently, it comes as no surprise that, given their fast rate of expansion and their increasing contribution to global growth, emerging economies are also the ones that have most boosted growth in insurance business over the last few years. While their contribution to global GDP has increased from 21% in 2001 to 34% in 2010, their overall share of life premiums has gone from 5% to 14% and non-life from 7% to 16%.

In the non-life segment, the main driving force is definitely economic growth. It has been estimated that a 1% rise in GDP per capita would be associated with a 1.3% rise in insurance density (premiums per capita). Apart from that, institutional quality has also been found to exert a significant influence, particularly contract enforcement. The number of automobiles, population density and the volume of foreign trade also seem to foster thethe development of this segment.(1) Nonetheless, the evidence available for this area is still limited as, to date, the vast majority of the empirical studies have focused on the life segment.

With regard to the life segment, its progress is also positively and significantly linked to economic prosperity but as from a certain threshold. Its rise requires a minimum level of development that ensures the emergence of a middle class and sufficiently liquid capital markets. It therefore tends to develop later than the non-life branch, when a suitable number of households achieve a reasonable level of income, which is estimated at a GDP per capita of between 5,000 and 8,000 dollars (in dollars from 2007)(2) and regulations and the local capital market have sufficiently matured. From this point on, when it becomes profitable, it usually grows faster than the non-life segment, with an income-elasticity (where income is measured as GDP per capita) estimated at around 2. In other words, a 1% rise in GDP per capita would be associated with growth in premiums per capita of around 2%.

In addition to economic growth and credit market development, progress in the life branch also depends crucially on other elements, including the existence of a public pension system, demographic factors and elements of a cultural or religious nature. A wide-ranging social security system (measured in terms of contributions) tends to lower the demand for life assurance, both because it reduces the need and also because it reduces the level of disposable income after tax and contributions. A longer life expectancy also has a negative effect on the demand for life assurance, which suggests there is less demand for life insurance when there is less likelihood of a premature death. A larger proportion of Muslims in the population also reduces the demand for life insurance. This relationship can be explained by the fact that, in some Islamic countries, life insurance is seen as not compliant with Sharia law. Life insurance is also less in demand with a higher rate of inflation, since a highly inflationary environment reduces the value of life policies. On the other hand, it has been observed that a larger population pushes up demand for life insurance, reflecting the positive effect of a larger client base, which facilitates risk pooling and economies of scale.

In short, the findings suggest there is some margin to speed up the development of the insurance sector from the institutional sphere: by promoting a solid economic environment and lower inflation; establishing a robust legal framework; encouraging the development of credit and capital markets; and by liberalizing the insurance market to enhance competition and productivity. On the other hand, insurance firms can also boost their penetration in emerging markets by diversifying their distribution channels, reaching a broader section of the population (there is a lot of room for exploitation in the bankassurance business in particular); innovating in products (as already done with new insurance policies against climate risks for agriculture or micro-insurance) or by adapting them to the cultural and religious background of each country (such as Takaful products, adapted to be compliant with Islamic Sharia law).

On balance, development in the insurance sector can bring about substantial benefits: it reduces the uncertainty and impact of large losses, allows risk to be managed more efficiently, supports commercial activity and thereby fosters investment, innovation and competition. In short, it constitutes a fundamental pillar in a country's financial and economic development, so that it is really worth laying the foundations to promote its growth and sustainability. 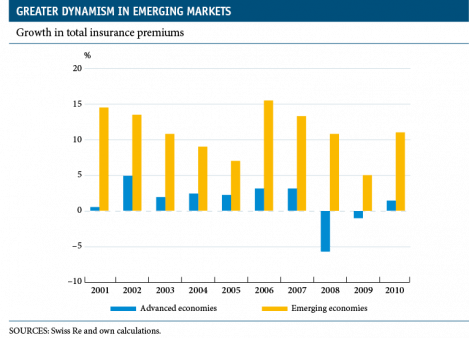 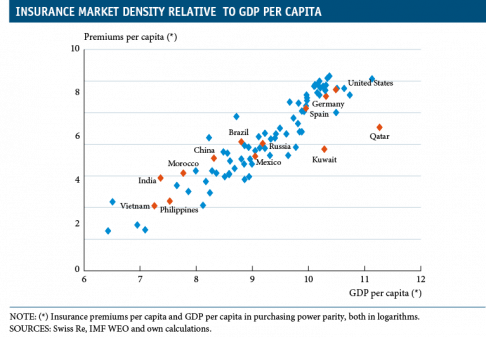