There are signs that suggest that the agricultural sector could be entering a new expansionary phase. Specifically, changes can be seen in the ownership structure of farms, in the sector’s human capital and in its trend productivity growth that point towards an increase in the sector’s growth potential. This has been evident in the recovery of the gross value added (GVA) generated by agriculture, which in 2018 reached 1.7% of the GVA of the economy as a whole, 0.4 pps more than in 2011.

The sector is still dominated by small property (70% of farms have less than 5 hectares), while agricultural producers generally reflect an ageing population group with a low level of education.1 This translates into lower productivity compared to its European counterparts: the average production per hectare is 1,400 euros in Portugal, compared to 2,400 and 1,700 euros for the euro area and Spain, respectively. In terms of average annual production per worker, the difference is even greater: 16,400 euros in Portugal versus 47,900 euros in Spain and 57,200 euros in the euro area as a whole.

But there are signs of change. On the one hand, larger agricultural structures (over 50 hectares) are on the rise2 and, while they only represent 4% of all farms, they account for around 70% of the utilised agricultural land area and have much higher productivity levels than the rest. In these large farms, production per worker is 46,800 euros (compared to 31,100 euros per worker in farms of between 20 and 50 hectares).3 On the other hand, the level of training has improved, and around 47% of agricultural producers have specific training in the sector (vocational courses and secondary or higher education),4 well above the 16% registered in 2013.5 Also of note is the growth in organic farming, which in general produces goods with greater value added: in 2015, this agricultural subsector cultivated 239,900 hectares (around 23% of the total cultivated land area), 25,600 hectares more than in 2006.

These changes in the structure of the sector are already reflected in efficiency improvements. As can be seen in the third chart, the trend in the main indicators of the sector over the past decade has been positive, particularly in terms of the greater quantity that has been produced, the productivity of the cultivated land area and the yield of the sector’s activity. According to the available data, in 2018 agricultural production reached 7,600 million euros and registered an average annual growth between 2007 and 2018 of 1.6% (2.1% in the euro area and 3.0% in Spain). By component, the fourth chart shows that production of fruit, horticultural products and animals – which represent 62% of the total production – has increased at an average annual rate of 4.5%, 2.6% and 1.5%, respectively, since 2007. Oil, meanwhile, only represented 1.8% of the total production in 2018 yet it has grown at an average annual rate of around 7%.

The growth in global trade, increased consumption of healthy foods and the sector’s efforts to make it more international have also played an important role in boosting agricultural activity. Between 2007 and 2018, exports of agricultural goods registered an average annual growth of 9.6%, higher than that of total exports of goods (3.4%). Fruit exports, which represent around half of all exports of agricultural goods, are the main driver behind this progress. Among other components, red fruits, citrus fruits and nuts have shown the highest growth, with average annual exports increasing by 33.1%, 24.7% and 6.3%, respectively. These were followed by oil exports, which grew by 14.6% on average in the period. The third biggest growth was registered in the field of animal production, with meat exports increasing by 12.7% per annum on average in the past decade. Finally, with regards to contributions to the increase in agricultural production, we cannot forget the importance of exports of derivative products of the food industry, an industry which is driven by the agricultural sector and accounts for around 9% of all exports of goods.

Looking ahead, international trade will continue to play an important role in determining the buoyancy of agricultural activity. Even if the slowdown in external demand in 2019 could result in a more moderate growth in exports of agricultural goods, there are factors that support the consolidation of a greater internationalisation of the sector. These factors include the following. Firstly, significant effort is going into penetrating new markets, such as China, Japan and India.6 Secondly, the country’s geography offers particular benefits, most notably a climate which allows it to bring products to the market earlier than other countries (especially fruits and vegetables), which has supported the growing trend in exports to countries of central and northern Europe, for instance. Thirdly, there has been a trend of contracts being arranged between producers and international companies operating in the retail food trade sector. Finally, some farmers have taken steps in the field of smart agriculture, the benefits of which will become increasingly apparent in the future in the performance of agricultural activity as a whole. In fact, this will be a key area for the creation of wealth in the sector.

1. In 2018, 88% of the population employed in agriculture, animal production, hunting, forestry and fishing had an educational level equal to or below primary education (National Statistics Institute).

5. Part of this improvement can be explained by the requirement established in 2013 for producers who purchase, transport and use phytopharmaceutical products to have completed a course on the application of these products.

6. In the case of China, in 2018 authorisation was obtained to export meat, while negotiations for obtaining the export license for grapes are in their final phase. In Japan, from February 2019 a new economic collaboration agreement has come into force which will have a positive impact on wine, cheese and meat exports. In India, at the end of 2018 agreements were reached for the export of apples and pears. 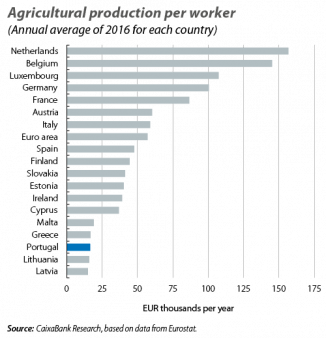 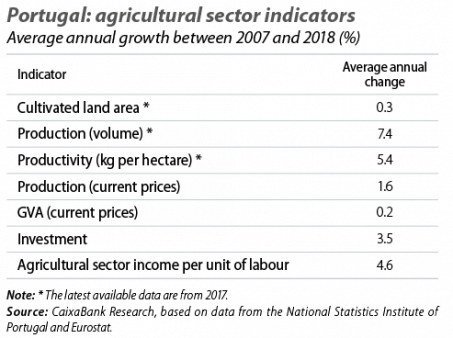 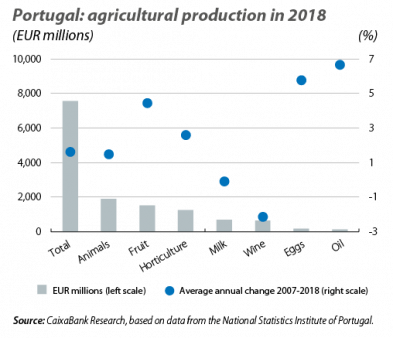