In recent months, there has been some concern about the strong growth in consumer credit and the possible risk it poses to financial stability. In its latest Financial Stability Report, the Bank of Spain warns of the need to monitor it closely to ensure that the banks’ exposure to this segment of credit remains at reasonable levels.

Indeed, consumer financing has grown by 40% between December 2014 and June 2018, and now stands at 85 billion euros (79% of the peak reached in 2008). Part of this strong growth can be explained by the low levels at the starting point, since during the financial crisis it shrank by nearly 50%. When analysed in detail, it is also clear that the main driver is the consumption of durable goods.1 Financing for this form of consumption has grown by 57% since the end of 2014 and it accounts for 75% of the rise in consumer credit.

The consumption of durable goods represents more than 50% of the consumption financed by the banking sector, because of the high initial outlay it requires,2 and it is particularly sensitive to the business cycle. Therefore, this higher level of activity is supported by demand which, after remaining contained throughout the crisis, is currently on the rise as a result of a better economic outlook, job creation and good financing conditions for families. In a recent report,3 the ECB stressed that the sharp fall in the consumption of durable goods during the financial crisis (–28% in real terms in Spain) has resulted in a decline in the effective stock of these goods and an increase in their average age. In other words, we kept our cars and refrigerators for longer than usual during the financial crisis, and now, with a consolidated recovery, we are replacing them. Therefore, the fast pace of growth we are currently witnessing has a strong cyclical – and thus temporary – component. This means that it will tend to slow down to more balanced rates when this piled-up demand reaches its conclusion.

Could this rise in consumer credit pose a risk for the banking sector? For now, the exposure of Spanish banks to this segment of credit remains limited, making up only 6.9% of the total credit portfolio. This is similar to the level of the banking sector in the euro area as a whole, which stands at 6.6%. In terms of GDP, consumer credit in Spain represents a slightly higher portion than that of the euro area (6.9% versus 5.9%, respectively), but this is still a far cry from the previous positions. In terms of credit quality, the Bank of Spain’s figures also confirm that it has improved, with an NPL ratio that fell to 5.2% in December 2017 (7.7% in December 2014) and with a reduction in doubtful credit of 7.5%.

In short, the origin of the strong growth in consumer credit is supported by the normalisation of demand, which remained contained during the financial crisis. In addition, this greater dynamism has not excessively increased Spanish banks’ exposure to this segment, since it remains at levels similar to those of the euro area, while the quality of this segment has improved and remains at comfortable levels. For now, therefore, the surge in consumer credit seems to have more to do with a process of normalisation than with an excess. As the supervisor has warned, it will be important to ensure that this remains the case.

1. This category includes furniture, household appliances, vehicles, etc. The rest of financed consumption includes everything from deferred payments using credit cards to non-durable goods and services, such as medical or travel-related items.

2. By financing the purchase of these goods, the payment is distributed throughout the item’s useful life, bringing it more in line with its use. 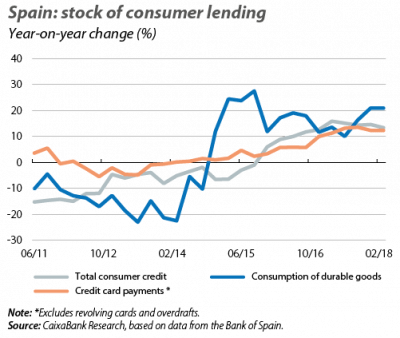 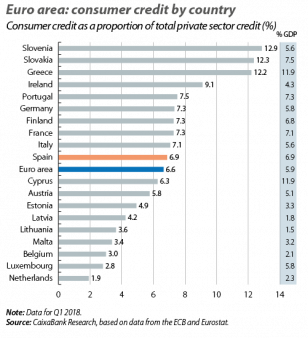