European banks are biding their time on the stock markets

The global financial crisis brought about a radical shift in monetary policy and a tsunami of regulations that have forced the banking industry to carry out far-reaching adaptations against the clock. In a context of widespread deleveraging and the need to sort out balance sheets, both ultra-low interest rates and higher capital requirements have implied a huge effort for banks to achieve levels of return in line with capital costs. Nonetheless, although all banks still face common challenges, the stock market performance of US and European banks has been diverging since the end of 2009 so that, while the market currently attributes a value higher than its book value for the former (a P/B1 ratio of 1.08), it has kept the value of the latter below its book value (a P/B ratio of 0.79). Why? And what are the implications for the future?

This divergence can initially be attributed to differences in the pace and intensity of reaction by monetary and regulatory authorities on both sides of the Atlantic. While the Fed acted faster and more comprehensively, Europe took longer to react and was more restrained, at least until Mario Draghi's «whatever it takes» in 2012 and the start of banking union. Without doubt these differences not only contributed to a faster adjustment in the US financial sector but also to an earlier and more vigorous economic recovery than in Europe.

Also, a more favourable macroeconomic environment can be seen in better capital returns (RoE) on the other side of the Atlantic. The average RoE for banks that form part of the S&P 500 stands at 8.9%, far above the 3.9% recorded by Eurostoxx banks. And thanks to the Fed beginning its interest rate hikes the outlook for bank earnings in the US has also improved, as bank revenue increases with higher interest rates since the cost of deposits, some of which (sight deposits) earn no interest, does not increase as much as the interest rate charged on loans.

The beginning of the end of low interest rates and the more advanced economic cycle in the US are therefore providing a more favourable scenario for the business of US financial institutions in the short term, which is pushing up their share prices. European financial institutions, however, continue to be penalised by a number of factors: in addition to monetary normalisation being a long way ahead, some banks are still getting their balance sheets in shape as economic weakness and the deleveraging underway is maintaining pressure on volumes and the cost of risk. On the other hand the need to complete the banking union and the greater harmonisation this will involve represent another source of uncertainty for expectations of future returns.

Given this situation, the US-European gap in terms of share prices could be interpreted in arbitrage terms: a lower price is demanded to invest in European rather than US banks because the returns from European business are lower and this is the determining factor in dividend growth. Investors are only ready to buy shares if there is a clear possibility of their value going up. Ultimately, investors are repaid via dividends and higher share prices. When pressure remains high on the RoE, expected returns depend on share price and a P/B ratio below one facilitates this growth until the sector's results become stronger and more stable, something which, on the other hand, should be a question of time if the current trend continues.

1. The P/B or price-to-book ratio is the quotient between market share price and the book value. Banking sector firms on the S&P 500 are used for US banks and those on the Eurostoxx for European banks. 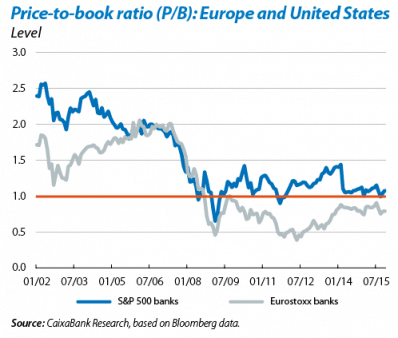 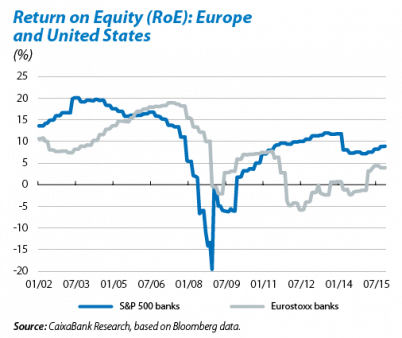