Towards the completion of banking union

Completing banking union is essential for strong and prosperous economic and monetary union. This is the premise that underlies the new proposal by the European Commission to create a European Deposit Insurance Scheme (EDIS) for all members of the euro area. The communication starts the arduous task of raising the third and last pillar required to complete European banking union. This Focus analyses the main aspects of the Commission's proposal.

The aim of this third pillar is to guarantee that all banking union deposits enjoy the same degree of protection irrespective of the institution they are deposited with and the country of origin. Although there is some standardisation at present in the coverage provided by national deposit guarantee schemes (DGS), up to 100,000 euros, this protection depends on the financial strength of the member States, responsible for covering any losses as a last resort. Breaking this vicious circle between sovereign risk and bank risk is the main aim pursued by the EDIS, which would reduce the vulnerability of national DGSs to local shocks by sharing the risk among the different member countries of the banking union. All this would help to reinforce the region's financial stability and reduce its fragmentation.

Should the European Commission's proposal be accepted, the EDIS would be introduced gradually in three phases. The first phase, planned for up to 2020, would establish a re-insurance system for national DGSs so that national systems could access the European fund after exhausting their own resources, with a limit of 20% of the European funds or 10 times the resources of the national fund. During this phase the funds accumulated by the national systems would also start to be transferred to the European fund (see the graph). In the second phase, risk-sharing would gradually be implemented via co-insurance, achieving a greater degree of distribution of risk among the national systems. In this phase both funds would become responsible for the costs as from the time when depositors would have to be reimbursed, with a progressively larger share of the European system, from 20% in 2019 to 100% in 2024. This would then reach the third phase, when mutual responsibility is complete and the EDIS would fully insure all European depositors.

Although one relative aspect of the proposal is its gradual implementation, others such as its scope or funding are also crucial for all countries to accept it. Regarding its scope, participation in the EDIS would be obligatory for all members of the economic and monetary union, whose banks are subject to the single supervisory mechanism. It would also be open to other members of the European Union wanting to join banking union. With regard to its financing, the fund would be financed via ex ante contributions from participating banks and would cover 0.8% of the region's deposits by 2024. This fund would therefore be financed completely by private means and with limited funds as the euro area does not have a single treasury offering any kind of implicit guarantee.

In principle, this new system should not involve any additional cost for banks but simply a transfer from one fund to another. However, given the possible changes in how contributions are calculated, this might not be case. At present, bank contributions to national DGSs are calculated based on the volume of insured deposits and the risk profile of each institution compared with the rest of the banks in the same country. According to the Commission's proposal, in the first phase this calculation will remain unchanged but, as from the second phase, the benchmark to compare risk profiles will be all banks in the euro area. The banks of a country whose risk profile is lower than the euro area average would therefore have to contribute less to the EDIS. The effect of this methodological change can only be quantified once more details have been announced.

In summary, this proposal by the European Commission is a step in the right direction but there is still room for improvement in some aspects, such as the harmonisation of national DGSs and specifying the method that will be used to calculate risk-weighted contributions to the fund. Negotiations will be long and controversial but this is a necessary step for us to approach full banking union. 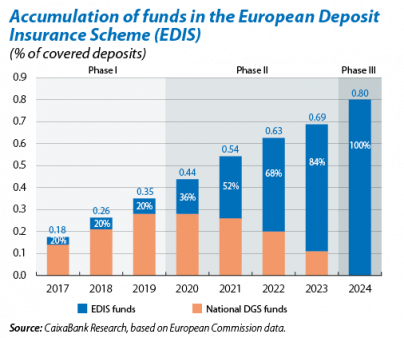