The sensitivity of the euro area's exports to exchange rate movements

The euro's recent depreciation could not have come at a better time for the euro area. A cheaper euro makes exports more competitive, providing a considerable boost for a recovery that, at present, appears to be more fragile than expected. According to the ECB's estimates, a long-lasting 10% depreciation in the nominal effective exchange rate of the euro (twice the depreciation occurring between January and November) would result in an increase of GDP of 0.2 pps in the short term and 0.6 pps in the long term.1 However, this effect is expected to be very different between countries. In fact, those economies looking less dynamic recently (such as France and Italy) should benefit the most from the euro's depreciation.

In particular, according to a recent study by the European Commission the elasticity of French exports to exchange rate movements doubles that of Germany and the Italian one triples it.2 The advanced technological level of German exports is one of the most frequently used arguments to explain the relative immunity of its exports to fluctuations in the price of the euro. More technologically advanced products generally enjoy greater differentiation and, as a result, their demand tends to be less sensitive to price variations. But when we look at the technological content of German and French exports overall, no great differences can be detected. There are differences between the two countries at a sector level, however. Industries with high technological content in France are different from those in Germany and such sector differences seem to lie behind part of the disparity between the degree of sensitivity of both countries' exports.3

Nevertheless, a more relevant force than sector differences, although it may seem counter-intuitive, is Germany's openness. Germany's greater degree of trade with countries outside the euro area, particularly in the transport equipment industry (the main export sector for both countries) gives exports more stability. Because, in spite of its relatively high technological content, the transport equipment industry is very sensitive to exchange rate movements. Unlike France, Germany has reduced this by improving the integration of its companies in the global value chain. Its trading relations are particularly close to numerous countries in Central Europe, most of which do not have the euro as their currency, and German vehicle exports contain a considerable part of intermediate goods from Central Europe, whose costs are established in the local currency.4

One example of this is the high percentage of imported intermediate goods that Germany ends up re-exporting, specifically 51%, a percentage that is much higher than in France, Italy or Spain with around 35%. So although exchange rate movements generally have more of an effect on countries that export the most, greater integration in global value chains reduces this sensitivity as the exchange rate also affects the cost of imported products.

In short, although it is the euro area's most open country, Germany will benefit relatively little from the euro's depreciation while this will be of great help to the rest of the countries, especially France and Italy (see the graph). These countries must take advantage of this boost to approve and implement an ambitious agenda of structural reforms to relaunch their long-term growth capacity. And time is short; even more so considering that the current account surplus the euro area looks like maintaining will limit any further depreciation in the future.

3. See Berthou, A. (2008), «An investigation on the effect of real exchange rate movements on OECD bilateral exports». 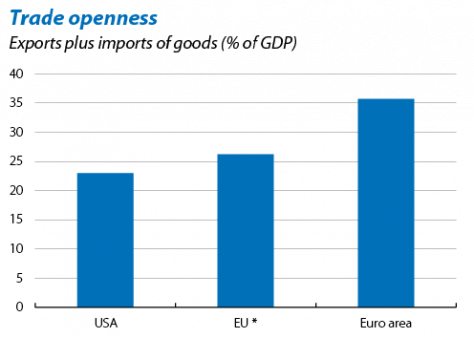 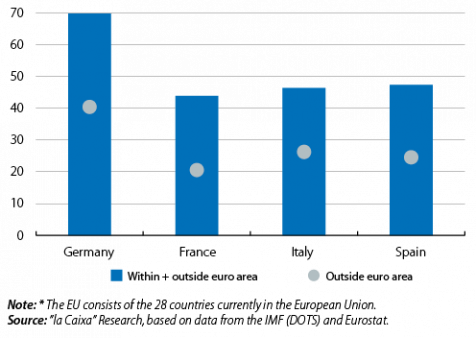