Should we be worried about the consequences of the USA's fiscal debate?

The arduous fiscal debate in the USA on the government shutdown (due to the lack of agreement to approve items in the federal budget) and the debt ceiling is one of the big risks facing the world economy in 2014. On 17 October, Congress reached an agreement that, for the moment, puts a stop to uncertainty regarding the debt ceiling and will limit the effects on US growth to the short term, so we have been able to keep our forecasts for GDP growth in 2013 and 2014 at 1.6% and 2.8%, respectively. But does this mark the end of hostilities? The answer is no.

The agreement reached is temporary and partial. It ensures the government will function until 15 January 2014 and that the debt ceiling regulation will not come into effect until 7 February 2014, although the allocation of 200 billion dollars for extraordinary expenditure could postpone this date until mid-March.

In the short term, the fiscal debate has had little impact on growth. The government shutdown has been limited to non-essential items of expenditure from the federal budget that need to have their budget allocation approved by both houses of Congress. These items, mainly federal government personnel costs, represent one sixth of federal expenditure (accounting for 3% of GDP) which, with the shutdown lasting almost three weeks, results in a decrease of 0.4-0.5 points in terms of annualised quarter-on-quarter growth. This loss will be offset in 2014 Q1 when the pending wages are paid, with an increase of equal size in the growth expected for 2014 Q1. In addition, uncertainty due to the debt ceiling may have deducted a further two percentage points which would not be automatically recoverable.

Beyond 2014 Q1, fiscal uncertainty will once again be present throughout the coming year. The biggest problem is the debt ceiling, representing a clear risk for growth in 2014. Apart from Congress's attitude, the public debt subject to the legal ceiling (almost all of it) has followed an upward trend, aggravated by the crisis, which has taken it from 30% of GDP in 1973 to 100% today. This fuels the arguments of those who want to keep the debt ceiling inflexible, which would mean the USA could not get into more debt. The impossibility of issuing more debt would force the administration to make a difficult choice. To continue being able to pay for debt already taken out and prevent a collapse in confidence in the markets, the administration would have to reduce its expenditure, which would entail a much greater government shutdown than the one seen this October. A cut in spending due to the debt ceiling lasting one month would result in a reduction of 175 billion dollars, 4.2% of the GDP for one quarter.(1) Our baseline scenario assumes that such a situation would be avoided but only by employing half measures and without any substantial rise in the debt ceiling to dispel doubts: doubts that push down our GDP growth forecast for 2014  (2.8%). 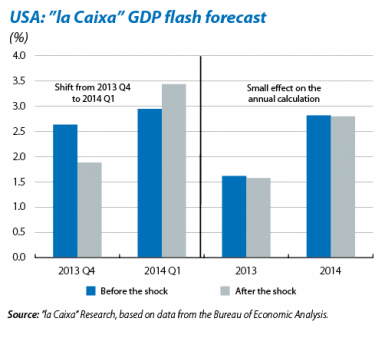 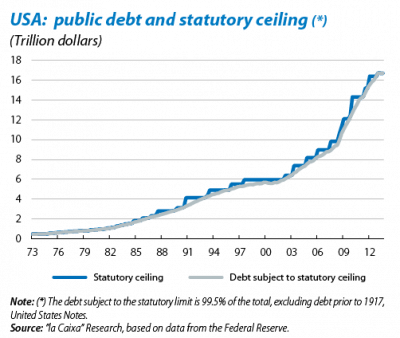