Spain's Central Government Budget for 2015: the economic recovery should help but to what extent?

The Central Government Budget (PGE in Spanish) presented by the government for 2015 takes advantage of the current economic recovery and a more favourable state of affairs. The macroeconomic context for the PGE, rated by the Independent Fiscal Responsibility Authority (AiReF) as plausible, predicts that growth will speed up in 2015 (2.0% of GDP), particularly boosted by domestic demand with significant increases in consumption and investment. This more positive environment should lead to both a rise in revenue and a fall in expenditure, with the public deficit going from 5.5% in 2014 to 4.2% in 2015 and the government deficit from 3.5% in 2014 to 2.9% in 2015.

The PGE predicts an increase in central government revenue in 2015 (see the first graph) thanks to higher tax revenue (+5.4%). It should be noted that this increase would have been greater without the fiscal reform (+7.6% according to government estimates), primarily amending income tax (reducing the number of tranches as well as the marginal rates applied) and corporation tax (which will gradually fall to 25% in 2016). In fact revenue from income tax is expected to decrease by 0.6% compared with the year-end figure for 2014 in spite of the improvement in activity. The highest increase is expected in VAT revenue which should grow by 7.2%, due mainly to higher private consumption (+2.7%, a little more than in 2014). The sensitivity of tax revenue, based on the scenarios produced by the AiReF according to the economic forecasts of "la Caixa" Research (see the table), suggests that this positive trend in future revenue contained in the PGE is feasible: the lower revenue forecast in some areas would be offset by higher rises in others although the final balance may depend on the actual impact of fiscal reform.

According to the PGE, central government expenditure will fall by 1.7% in 2015 (see the second graph). By item, personnel spending will increase slightly as well as investment (including the CRECE Plan).1 The largest item, namely current transfers, will fall due to a smaller contribution to the Public Employment Offices for unemployment benefits, counteracting the rise in spending on other items. The next most important item, financial costs, will also fall thanks to lower interest payments on public debt (in spite of the increase in the level of debt), and might even be overestimated.

In short, the PGE contains an increase in revenue and a decrease in spending that depends especially on the business cycle and to a lesser extent on structural adjustments to central government spending and improved efficiency. But there are still downside risks, such as a slowdown in euro area growth. The government must therefore follow the budget strictly and remain alert as the predicted reduction in the deficit to 4.2% of GDP, although plausible, is dependent on a scenario of economic recovery that is not entirely in the government's hands.

1. Plan of measures for growth, competitiveness and efficiency (CRECE) passed in June 2014. 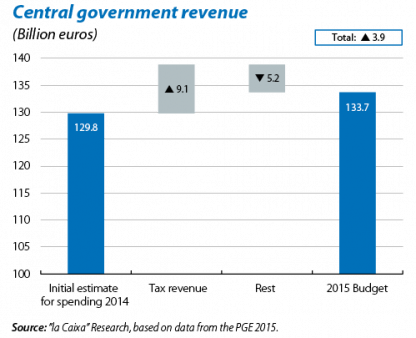 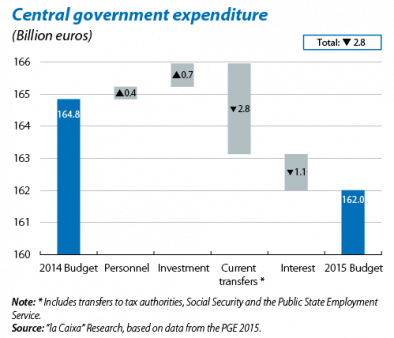 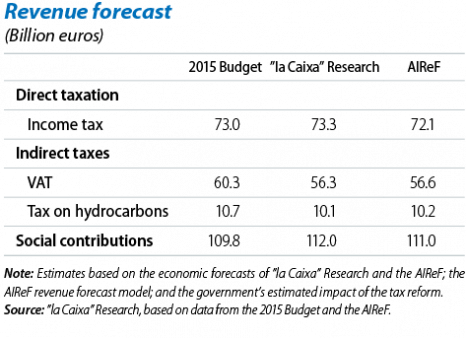