The adjustment taking place in Spain's real estate sector is approaching its fifth year. House prices have accumulated a 25% drop in nominal terms and reverted to 2004 levels. In real terms, once we take the increase of the cost of living into account, this fall rises to 32%. The adjustment in real estate activity is also substantial. Housing starts have currently dropped to one tenth of their maximum values obtained during the 2006 peak. This is the largest correction in the sector since statistics started and, even so, there are still few signs of this process coming to an end. However, a detailed analysis of the main factors behind this drop, both on the demand and the supply side, as well as the key regulatory changes that will occur, provide some highly relevant aspects for the sector's future.

In terms of demand, there are two reasons that explain its weakness: new demographic trends and the double dip recession. During the last expansionary cycle, the population increase was exceptional and, as can be seen in the graph below, this helped to push up house prices. This process was spurred on by the baby boomers reaching the age of emancipation. However, this trend has completely changed its direction. In addition to the progressively ageing population, a significant amount of inhabitants have emigrated abroad. Specifically, the 25 to 39 age group, the most likely to buy a house, has fallen by 281,463 people during the first nine months of 2012. According to forecasts by the National Institute of Statistics (INE), this trend will continue between 2012 and 2014 and the cumulative drop might actually exceed one million inhabitants.

Housing affordability shows some relatively encouraging progress, despite the relapse in economic activity over the last few quarters. The fall in house prices has exceeded that in gross disposable income of households, so that the affordability ratio (computed as house prices as a percentage of gross disposable income of the average household) has improved considerably. For instance, the years of income required to meet the cost of a home has fallen from 7.7 in 2007 to 6.0 years currently.

Despite this considerable correction, the effort to acquire a home is still relatively high compared to historical data. For example, if prices stabilize at around 5.4 times the gross household income, the cumulative fall in house prices would be 33.4%. This implies an additional fall in the price of 10.6%. This drop takes into account an increase in household income in the medium term. Moreover, both lower interest rates and the rise in mortgage maturities observed over the last fifteen years are helping to raise the affordability ratio to higher levels than those observed between 1995 and 2001.(1) Then, house prices were the equivalent of approximately 4 years' gross household income. In order to reach this number, an additional adjustment in house prices of 31.7% would be required. In this case, the cumulative drop in house prices would reach 50%.

A detailed analysis of the supply also offers significant distinctions. According to the Ministry of Public Works, the stock of completed but unsold housing in December 2011 was 676,038 units. A figure that is approximately equivalent to six times the cumulative transactions between July 2011 and June 2012. As is well-known, oversupply is notable. But there are important differences around the country. In 2011, those coastal provinces with a high relative weight of tourism had an average stock equivalent to 11.0 years of annual transactions, a figure that has even grown over the last few years (see the graph below). However, in the rest of the provinces, the length of time needed to empty the stock was significantly lower, specifically 4.8 years. These figures are clearly above the historical ones, traditionally below one year of annual sales. Therefore several years of adjustment are still required. However, given the significant regional differences, the recovery in some zones will start before the sector as a whole has sold all its oversupply. Fortunately, these are the areas where there is most real estate activity.

The third and last key factor in the development of the real estate sector is related to the regulatory changes made throughout 2012. These are: the creation of a company to manage toxic assets transferred from bailed-out banks (discussed on page 69), the end of the tax allowance for house purchases and the new rental act. With regard to the last two aspects, we expect them to boost Spain's rental market, whose current importance is relatively small.(2) In fact, at the end of 2011, the percentage of Spanish households in rental accommodation was 17.3%, 12 percentage points lower than the European average. This differential can be partly explained by the incentives given for leveraged house purchases, specifically the 15% tax deduction on annual mortgage payments. Following the recommendations of the European Commission, the government will eliminate this measure as from 1 January 2013, which will reduce the demand for home ownership in favour of rental, an additional factor that will push down house prices.

In short, the adjustment taking place in real estate supply and demand is not trivial, particularly in such a heterogeneous and fragmented market as housing that is also subject to significant regulatory changes. However, a detailed analysis reveals that the sector's adjustment is now closer to the end and, in fact, some zones will soon start to see some light. The adjustment pending is still considerable but it seems as if the real estate sector now has its feet closer to the ground.

(1) Another factor that might push up the equilibrium level would be a reduction in the average surface area of houses, as the affordability ratio keeps this constant over time, specifically at 93.75 m2. 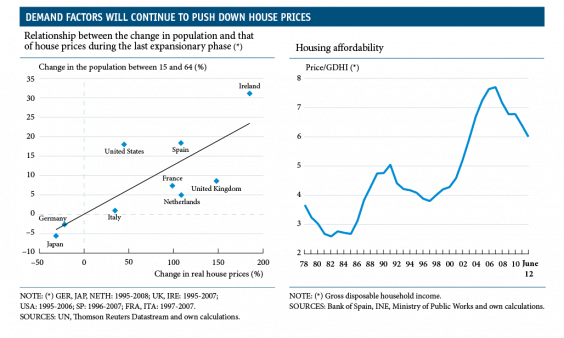 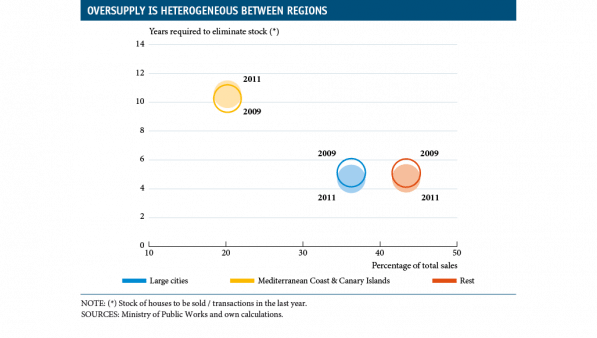